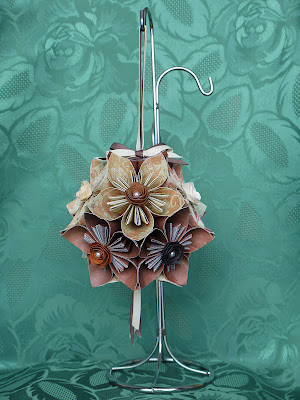 On Saturday we had our monthly craft group meeting and for this session Sandra took charge with a mystery project.  She showed us how to fold a square of paper so that it formed a petal for one of the flowers in a kusudama flower ball.  Each flower has five petals and twelve flowers make a ball.  I only made a few petals during our crafting session but was determined not to let another project go in to the UFO (unfinished object box) so continued folding squares at home until the sixty needed were folded. 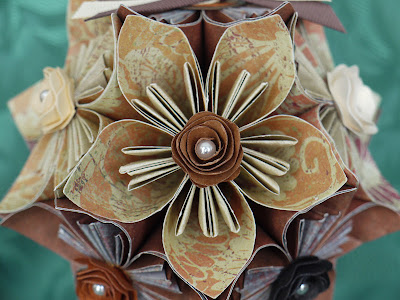 The papers used to make the ball were from a bag of Scrapbooking paper bought from Costco.  To get a set of uniform squares for folding each one was cut using a Spellbinders die.  In the centre of the flowers is a quilled flower cut using the Marianne die English Rose.  A stick pin pearl was added to the centre of the quilled flower.  The ribbon trims used are Stampin' up's Chocolate Chip and Very Vanilla grosgrain ribbon.  Here are views of the top and bottom of the ball.  A Spellbinder circle die and the 3/4" circle Stampin' up punch were used to make the flower centres to thread the ribbon through. 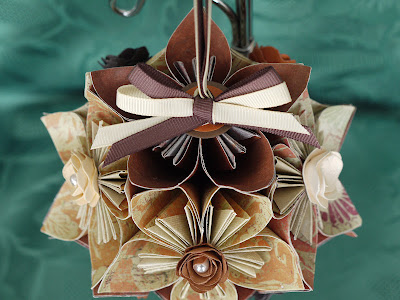 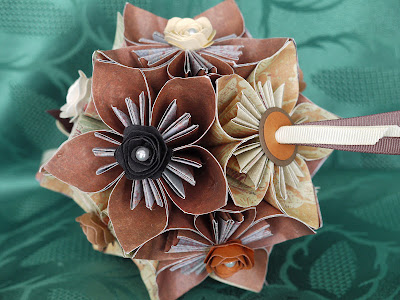 As well as showing us how to make these flower petals Sandra also brought along kits for us to make a telescopic snowman card.  I've been wanting to make one of these style of cards after seeing them on Erika's blog.  Erika is a demonstrator for Spellbinders dies and Personal Impressions stamps and our group like to go to her demonstrations at the Papeterie when she comes through to Aberdeen.  On Saturday Norma brought along at least six lovely cards which were created using inspiration from Erika's last two visits.  It would have been lovely for Erika to have seen them so she could know how worthwhile we find her visits. 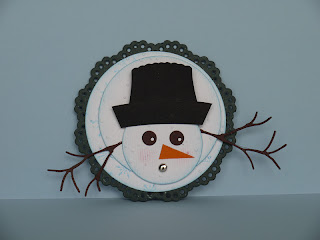 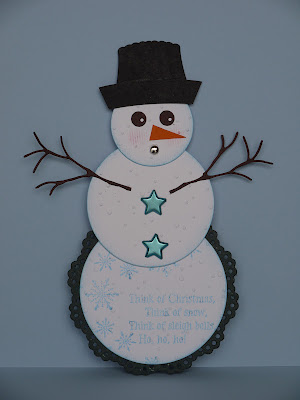 I cased decorating my snowman from Ruth at Flower Sparkle.  I'm not sure what Sandra used to cut all the pieces for the snowman but I do know that the eyes and arms were cut using the Memorybox twigs and berries die and the decorative circle was a Nellie Snellen flower circles die.  The three pieces of the snowman swivel on the brad for his mouth and the  lowest star brad on his body.  The verse was stamped using a Hero Arts stamp and the snowflakes were from the Stampin' up set Serene Snowflakes.

These projects kept us busy all afternoon and along with tea, Janet's lovely lemon drizzle cake and cream sponge and a catch up on our news I think a productive and enjoyable afternoon was had by all.

Thanks for reading today.
Liz xx 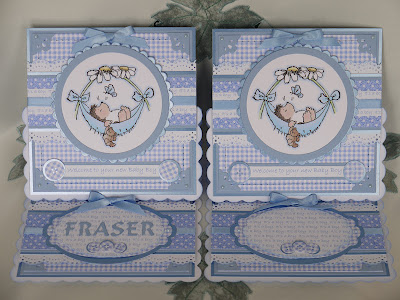 These are two baby boy cards I've made recently.  Last year I made a wedding card, and helped Elaine and Andy make fudge for wedding favours, for Andy's friends Chris and Karen and a few weeks ago their little boy Fraser Angus Stewart arrived.  Although Chris and Karen live close to Newcastle they chose to get married in Scotland and have given their little lad a real Scottish name.  The second baby card is for one of Elaine's friends and has still to be personalised as this little fellow isn't due until the end of October. 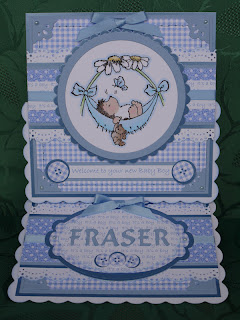 This card is a case of a cased card which I made for the arrival of a grand nephew at the beginning of the year.  The only additions to this one is a few die cut buttons made with a Quickutz die so that these cards qualify for this month's Penny Black Challenge of Buttons and Bows.  The Penny Black image used is Baby Hammock and is coloured with Promarkers. 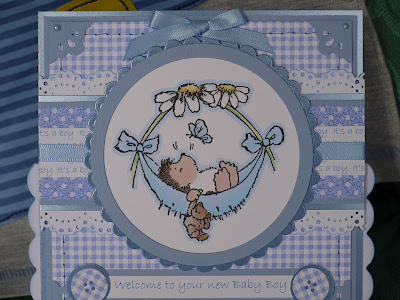 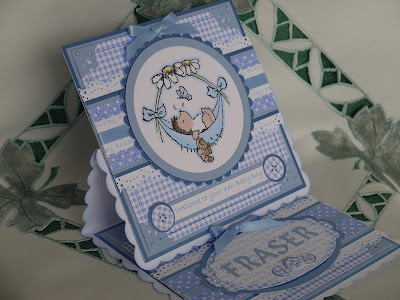 Whilst shopping in Tesco I spotted this T-shirt and socks to match and couldn't resist buying them to include with the card. 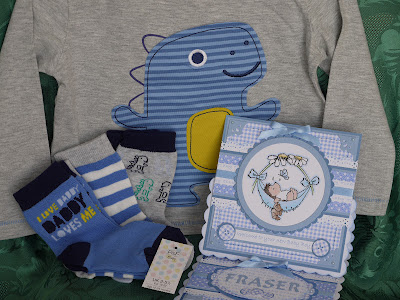 Thanks for reading
Liz xx 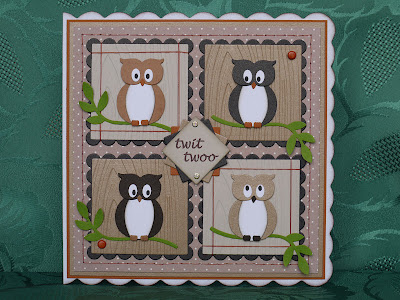 This is a card I made for Andy's birthday which was on Saturday.  Andy is our daughter's boyfriend and he is very conscious of making life choices which are beneficial to nature.  Rather than choosing flowers for their display he's chosen plants for his garden which are popular with bees and insects.  He's also constructed a hedgehog hibernation shelter and set up bird feeders.  Recently Andy has been delighted as they've been hearing the hoots of an owl nearby and I took this as the theme for his birthday.

The owl characters were made using Quickutz dies and they are perched on a branch punched from the Stampin' up build a bird punch.  The backing layers for the owls were cut using  plain and scalloped square nestabilities.  The plain squares were embossed using the Crafts Concepts woodgrain embossing folder and  thread was wrapped around two of the owl panels.  The same colour of thread was used to stitch a border around the spotted backing card from Kanban.

The twit twoo sentiment is from the Dawn Bibby stamp set Twit Twoo and is stamped using Stampin up Chocolate Chip ink.  The same colour of ink was sponged around the edges of the base card, the sentiment and the owl front.   A smaller plain square nestabilitie die was used to cut the layers for the sentiment. 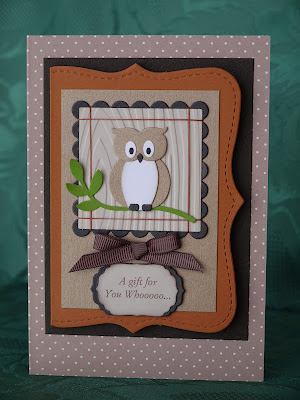 I'd decided to get Andy some vouchers from Dobbies for his birthday and at the last Crafting Bee Carol helped me make a gift card wallet to put them in.  It had been a design she'd used for a swap at the previous Stampin' up Tartan Stampers meeting.  The outside of the gift card was also decorated with an owl topper and a poem I'd written made up the insert.  The vouchers were folded and placed in the holder before Andy received them. 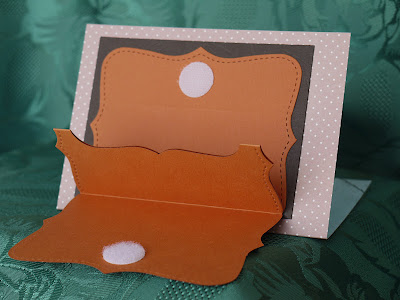 The picture above shows what the gift card holder looks like on the inside.  This is cleverly constructed using the Stampin' up Top Note Sizzix die.  Below is the poem from the inside.

Enjoy using these
for whatever you need,
plants for the garden
or bags of bird seed,
bulbs for the spring
a shovel for the snow,
tree lights for Christmas
for that festive glow.
There's lots to choose from
to add to your home,
except.....,  perhaps.....,
a garden gnome.

Andy has recently had knee surgery and so has been stuck at home finding time passing quite slowly. As a novelty gift I added a wooden owl construction kit to keep him out of mischief.  However, he treated himself to an ipad for his birthday so I don't think he'll be at a loss to amuse himself until he's fit to go back to work. 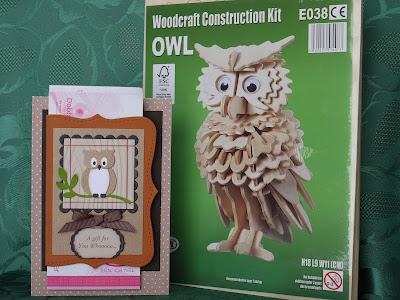 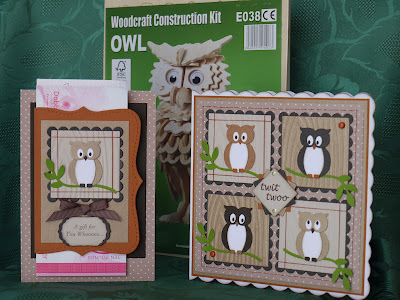 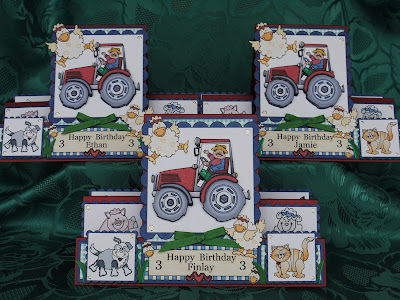 Earlier this year I made two of these stepper cards for grand-nephews using free digital downloads from Cuddly Buddly and for the last few months I've been trying to complete another three at our weekly Crafting Bees.  A sense of urgency to get them completed crept in last weekend as it was to be Ethan's birthday on Tuesday and tomorrow it's Finlay's birthday.  Jamie's birthday isn't until December so at least I'm ahead of the game before the Christmas card making panic takes over.

In addition to the same materials I used on the other two cards I've added green gingham backing paper to some of the panels on these.  This too is from a Cuddly Buddly download A Patchwork of Papers Green.

Here are some individual views of the cards and also a view of the reverse. 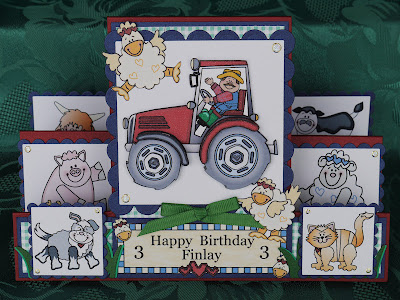 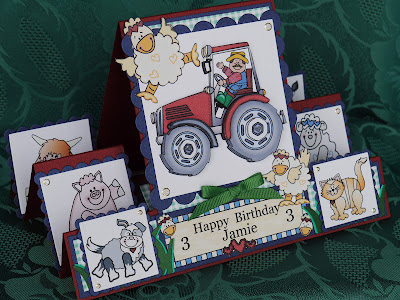 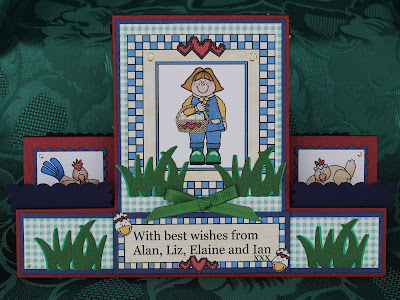 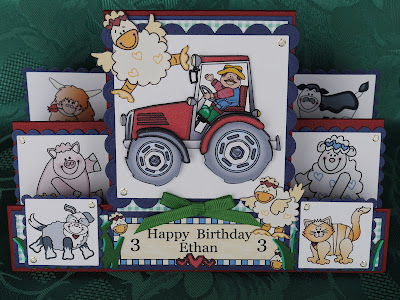 I'd like to enter these cards in the following challenges
Come and Get it Had a Challenge - Animal Challenge
Challenges 4 Everybody 3 - Anything Goes
Chocolate, Coffee and Cards Challenge 21 - Down on the Farm
Charisma Cardz Challenge 36 - Shaped Cards
Paperplay Challenges 37 - Fancy Folds
Divas By Design Challenge 52 - For a Child
My Time To Craft Challenge 188 - More Than One Fold
Make It Monday - Anything Goes
Pin and Tack Challenge 1 - Anything Goes