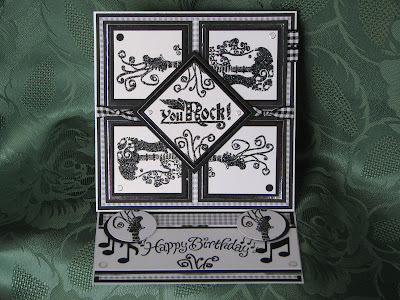 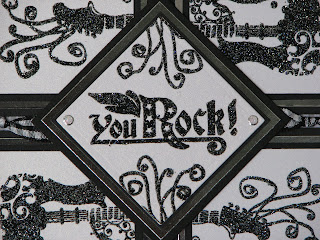 This is the third version I've made of this card this year and each one has been slightly tweeked to suit the recipient.  The set of stamps I used is from Inkadinkado and it also includes a drum kit so I was able to create a similar styled one for a drummer.  This one's destination was Colwyn Bay, North Wales, and is for Fraser who celebrated his fifteenth birthday today.  Fraser is an active lad and he and a group of friends have formed their own band.  Not only is he busy with gigs and practice sessions he's also in training for a Duke of Edinburgh expedition at the end of this month.  Amongst studies he's also fund raising for a school trip to Patagonia next year.
Details on how to make this card can be found on this post.  There are extra musical notes added to the version above which were made using a quickutz die and the stopper posts were cut using circle nestabilities dies rather than a one inch punch.  Much easier to cut through thick card.  I also stamped the string ends from the guitar stamp underneath the Happy Birthday message on this one.
Thanks for reading
Liz x
Posted by Liz Miller at 14:57