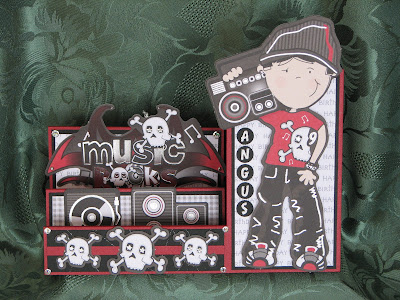 Today is my nephew's birthday and as you can see he is called Angus.  He's nine today and this is the card I've made for him.  I'm not sure if he'll have time to celebrate today as Saturday is taken up with football and rugby and then his sister goes to fiddle lessons and netball.  Hope he has a good day whatever else they get up to.
At one of our Crafting Bees Ann was making a stepper card using instructions from one of Carol's Making Cards magazine and between us we were trying to work out the measurements, cuts and folds to construct it.  She made a lovely card and so I decided I wanted to have a go.  Using the measurements from the magazine as a guideline I adapted them to make the panel sizes I needed for this one and then decorated it using a Kanban topper sheet.  This was a really easy card to put together once the stepper card was made.  The Happy Birthday backing paper and the gingham paper were taken from a Cuddly Buddly download, A Patchwork of Papers - Blue, and printed in greyscale.  Other embellishments used were Bling Bling self adhesive crystals to decorate the studded wrist band and I gave him an earring too.  Peeloffs letters, stuck on to half inch punched circles, were used to personalise it for Angus. 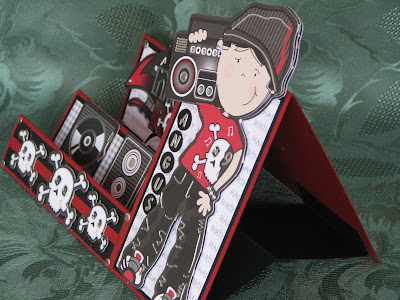 After the card was finished I set it up and after a while it started to splay at the more heavily decorated topper side so I attached a folded piece of card to the inside to act as a brake.  Hopefully you can see it from the side shot.  Will have to remember this when I next make a stepper card.
I'd like to enter this card in the following challenges
Cupcake Craft Challenge 169 - Teenage Boys
Cards For Men Challenge 24 - Fancy Folds
Make It Monday - Anything Goes
Thanks for reading
Liz xx
Posted by Liz Miller at 02:43