A Card for the Other Half's Birthday 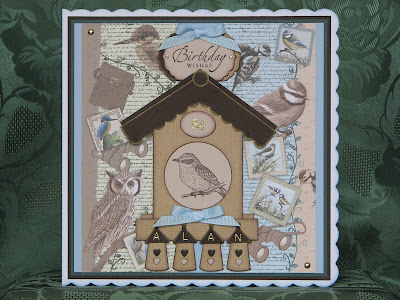 It's my other half''s birthday today and this is the card I've made for him.  I'm not very good at coming up with ideas for masculine cards but quite enjoyed creating and personalising the little bird house on this one.

The inspiration for the card came from the bookmark panel sheet from Kanban's British Birds Collection.  Only half the sheet was used, as there are four bookmarks on it, so there's the possibility of making a matching bookmark gift too.  The plain coloured cardstock came from the Papeterie. 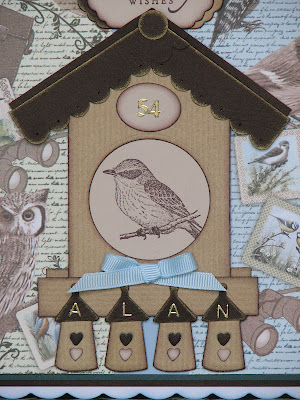 To make up the bird house I used a Kraft card base to cut four rectangles, two for the box with the top corners chopped off both to create a triangle shaped top and two for the base with the back one cut a little shorter than the front one.  A Nestabilites circle die was used to cut the hole for the front of the box.  The little bird houses spelling out Alan's name were also cut from the kraft card using the Marianne Creatables die set Bird with Ivy.  As well as cutting them out in kraft card I cut them out in brown to get the roof tops and hearts and also in light brown to get an extra heart embellishment.  The kraft card has a white core so I sponged Stampin' up's Chocolate Chip ink around the cut edges.  For the roof I cut strips of brown card, edged them using Stampin' up's scalloped edged punch and overlapped and trimmed them to create a sloped roof.  The edges of the roofs on the small and large bird houses were sponged with Encore gold metallic ink.  The ball at the top is a half inch punched circle and the house number plate was cut using an oval Nestabilities die.  You can guess why it's house number 54.

The final touches were adding some gold round brads, gold peel off numbers, letters and dots and Stampin' up's Bashful Blue ribbon.  Bashful Blue ink was sponged around the edge of the base card.

Hopefully Alan will enjoy his birthday even if it's a working one.  At least he doesn't have my cooking to come home to as we're heading out for a birthday tea.

I'd like to enter this card in the following challenges
Shopping Our Stash Challenge 49 - Starts with a B (brown, blue, brad, bird, birdhouse and bow)
Alphabet Challenge Blog - F for Feathered Friends
Crop Stop Challenge 69 - To the Birds
Make It Monday - Anything Goes

Thanks for reading
Liz xx
Posted by Liz Miller at 01:16