Spring Colours for a Spring Birthday

The card in this post was made a couple of weeks ago for a grand-niece's birthday. The topper had been lying coloured and unused for a long time and, although the colour scheme isn't one I'd normally use, it seemed right for a Spring birthday card. The image is Whispy from Krista Smith's Saturated Canary collection and is coloured using Promarkers with Crafters Companion glitter spray added to the wings and dress.

Spellbinders dies were used to cut a rectangle and circle frame for the topper and behind those were added two rectangle matts which were embossed using a random dot folder. 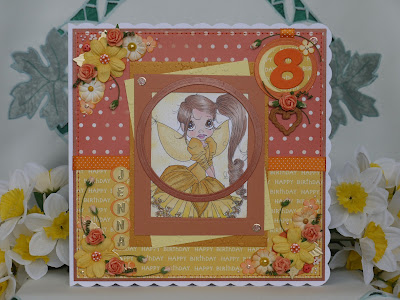 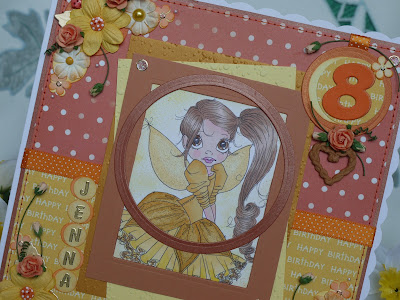 Spotted backing paper, buttons and ribbon from the Sunshine Papermania Capsule Collecton were used and the yellow Happy Birthday paper was printed from the Cuddly Buddly download A Patchwork of Papers Yellow. The two patterned papers were taped together and die cut using a Sue Wilson pierced square die, then taped to the backing card and the pierced border stitched using an orange thread. 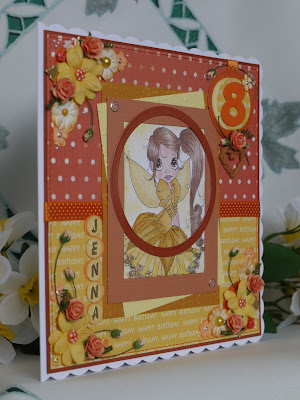 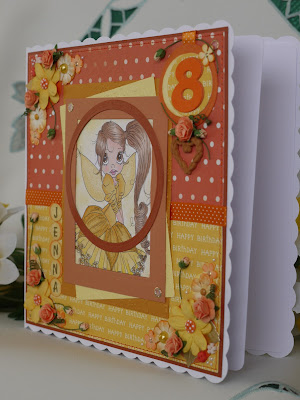 At last month's craft group meet we were commenting on having lots of flower embellishments in our stash and pondering on ways we could use them.  On Jenna's card I've managed to use up some of mine including paper flowers, mulberry roses and buds, flower buttons and a few little layered up flowers punched using a Tonic punch.  Orange ink from a felt pen was sponged on the edges of some of the flowers.  To the centres of the flowers buttons, flat backed pearls, brads and crystal sticker dots were added.

Little white adhesive pearls were added amongst the flowers and gold leaves, cut and embossed using the leaf die from the Marianne English Rose die set, were added behind the flowers. 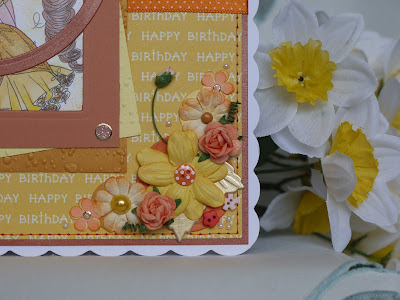 Jenna's name and age were added to the card to personalise it for her. Alphabet stickers were added to half inch circles, punched out using Stampin' up's half inch punch and sponged with orange ink, and her age was die cut using Marianne number dies.  Spellbinder circle dies were used to cut the layers behind the flower embellishments and the number eight. 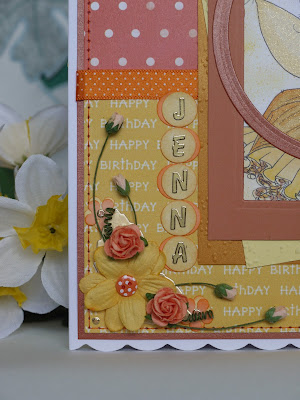 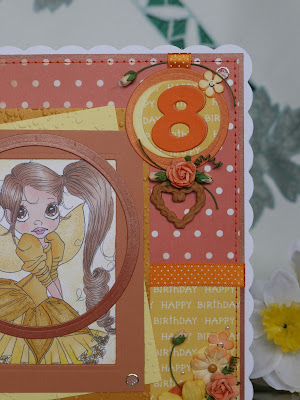 Other embellishments added to this card were a few larger crystal sticker dots added to corners and an entwined heart which was amongst a bag of buttons I bought from Create and Craft many moons ago when Alan and Barry were at the helm.

Hopefully Jenna enjoyed receiving her Spring card as much as I enjoyed making it.