This is the 400th post on my blog and the card I've chosen to write about is one I made for our daughter Elaine and her husband Andy who celebrated their second anniversary recently. 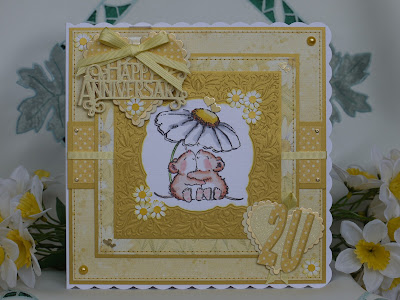 There was a mix of old, new and free craft items used to make this card.  The starting point was the Penny Black stamp Squeeze 'til I Squeak which was stamped onto Hobbycraft's white linen card and coloured using Promarkers.  The daisy head, its centre and mice feet were stamped and coloured a second time and layered on top.  Using the daisy image was significant because we gave Elaine a Sheila Fleet Daisy pendant on her wedding day.  Check out this previous post to find out the story behind this jewellery design and the box I made for Elaine's pendant. 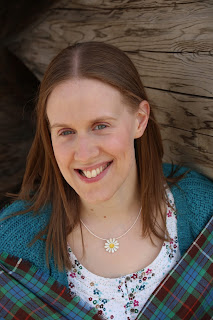 A free embossing folder from issue 161 of Simply Cards & papercraft and a set of dies which had been a reader offer in the same issue were used to frame the image.  This was layered onto daisy patterned paper from K & Company which had been die cut using a Sue Wilson noble pierced square die.  Stitching was added to the paper once it had been attached to gold pearlescent card. 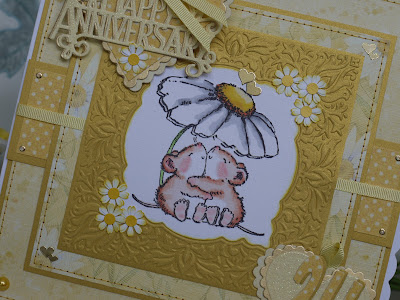 Two more patterned papers were used on the card and both were from digital downloads and printed onto white linen card.  The spotted one was from the Cuddly Buddly set A Patchwork of Papers Yellow and the marbled effect one was a backing paper from the Fred She Said set Purple Pansies.  The marbled paper was also die cut using a Sue Wilson noble pierced square die with stitching added before it was attached to the pearlescent card. 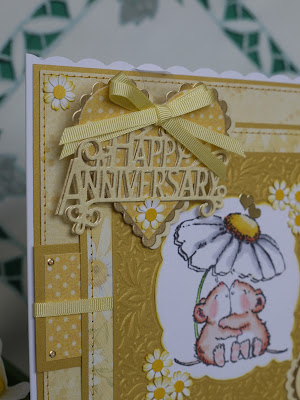 Spellbinders plain and scalloped hearts dies and Tonic's Happy Anniversary die were used to make up the sentiment topper.  Along with the patterned papers, glitter card and matt gold linen card were used to make up the layers.  The completed topper was attached to the card base using a strip of acetate at the top and wet glue at the bottom.  This allowed the topper to stand out from the card and added dimension.

The topper at the bottom of the card was also made using the Spellbinders heart dies and the 2U added on top were die cut using the Sizzix sizzlets die set Chunkidelic. 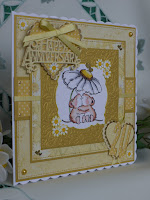 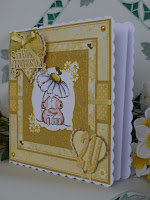 Other embellishments added to the card were flat backed pearls, grosgrain ribbon and crystal dot and gold heart stickers.  A small Woodware daisy punch was used to make the flower embellishments. The daisies were layered and ink was sponged on the tips of the petals.

A tag for their present was made to match the main topper. 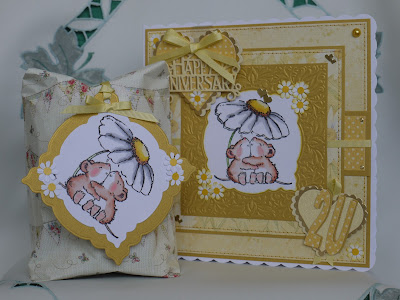