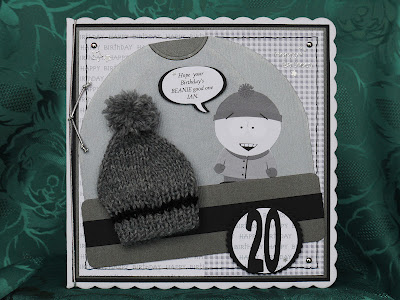 As well as it being Ian's girlfriend's birthday recently it had also been his 20th birthday two days earlier and this is the card I made for him.  I was really struggling for a theme idea this year but ended up going with a beanie one.  Ian loves wearing beanies and it makes no difference whether it's snow, sun or rain, or how much I lament, the beanie still goes on.

Just recently I took out my knitting needles and knitted a couple of the Fish 'n' Chips Babies vests and beanies after seeing this posting on Dawny P's blog and this was the first time Ian had seen me knitting.  He was genuinely impressed at the speed I was making and requested that I knit him a purple cabled beanie for his birthday.  I forgot about this conversation until I read a message on his facebook page a week before his birthday saying that he was "stoked" that he'd persuaded me to knit him a beanie for his birthday.  Fortunately I had purple wool in my stash and found a pattern on the internet and so was able to fulfill my promise. 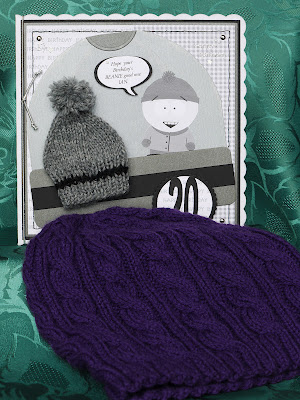 The paper pieced beanie on the card was made by using a small plate to draw around and then using the same plate to make a smaller section to set in the middle to give the impression of shaping towards the crown of the beanie.  The brim was made using strips of card rounded at the corners and the crown was cut using one of the circle nestabilities dies.  The little character set in the brim is Eric Cartman from Southpark.  His little message was created on the computer and then cut using an X-cut speech bubble die.  Unbeknown to me, whilst Ian had signed up to a month's free viewing on Netflix recently, he had watched a great number of the Southpark programmes so this made the card more special to him.

The knitted beanie embellishment was made using an egg cosy pattern which I found on the internet.  The number twenty was cut using Sizzix sizzlets dies and some bling was added with a peel off Happy Birthday, some stars and silver brads.  Stitching was added to make an extra frame. 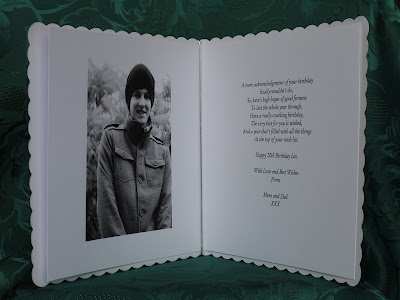 The Happy Birthday paper and gingham paper were printed in greyscale from the Cuddly Buddly download A Patchwork of Papers Blue.  This is the inside of the card with a picture of our beanie man included.  Although I think Ian looks more handsome without his beanie this is one of my favourite photos of him taken by his sister Elaine.  You can find it in the Portraits Gallery on her photography web site.

Thanks for reading
Liz xx
Posted by Liz Miller at 01:19