Today is the first birthday of a grand nephew and this is the card I've sent him. 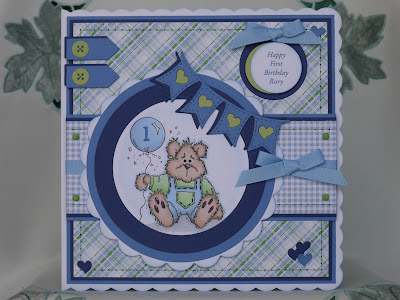 There are three little fellows with first birthdays amongst family and friends this year so I bought this stamp to use on them and as it was a Penny Black stamp I've made the card to fit the Penny Black Saturday Challenge this month which is a sketch.  It's a long time since I've entered their challenge and also a long time since I've coloured in using ProMarkers and it felt like starting all over again. 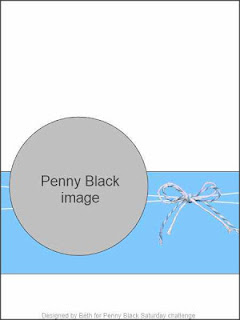 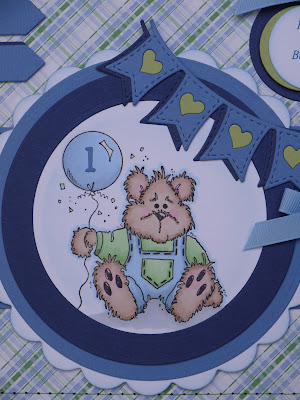 The Penny Black stamp used is called Balloon Teddy and after being coloured was framed using circle and scalloped circle grand nestabilities.  Bashful blue ink from Stampin' up was sponged around the image and around the scalloped circle and a number one was added to the balloon using a Quickutz die.  The heart banner was die cut and double layered using a La-La Land die with green hearts cut from Stampin' up's old olive card added to the top layer. 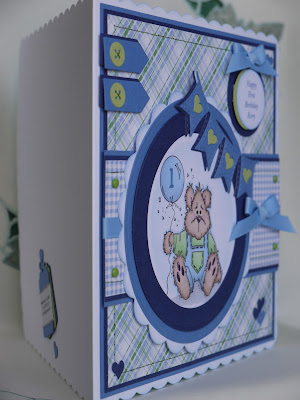 The patterned papers used were from the Cuddly Buddly download a Patchwork of Papers Blue and a stitched border was added to each paper layer.  The blue card is from the Papeterie.

A quickutz die was also used to make the tab embellishments and the blue hearts from the heart banner die cuts were used to decorated the corners of the card.  Other embellishments used were green brads and blue grosgrain ribbon. 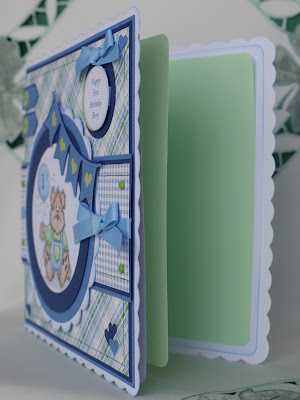 The sentiment on the outside of the card was created on the computer and cut using circle nestabilities dies.  On the inside a verse and message was printed on to a green insert which was layered on to a white layer which had its edges sponged with bashful blue ink.  Bashful blue ink was also sponged around the scalloped edges of the main card.

It's a day of celebrations in Rory's house today as it's also his Mum's birthday.  Hopefully they both have a good day together and both get equally spoilt.

Thanks for reading
Liz xx