Today is Gracie's birthday.  Gracie is my friend's Mum and as our Elaine and Ian have been growing up she has remembered them on their birthdays so it's nice to remember her one too.  Recently she has had a lovely trip away with her daughter. The first stage of the trip was to London to visit Buckingham Palace and they also attended the recordings of two Christmas Songs of Praise  television programmes in the Royal Albert Hall.  The second stage was to visit her son-in-law in Paris where he lives and works.  She loved Paris so much that she's left her dressing gown there so she can come back.

It was back to the larger nine square layout for Gracie's card with more stamping to decorate the squares.  Patterned papers from the Nitwit Collection Promises and the Pink Petticoat Colour Collection Little Swirls were used as backing layers along with purple and lilac cardstock. 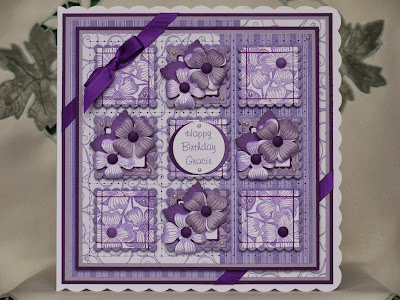 The floral stamp from the Sizzix Hero Arts framelits die set Butterflies #3 was used to stamp the squares and also create the decoupaged flowers.

Encore Purple metallic ink was used to stamp the images on to white and lilac card and Spellbinders plain and scalloped squares were used to cut out the topper layers. 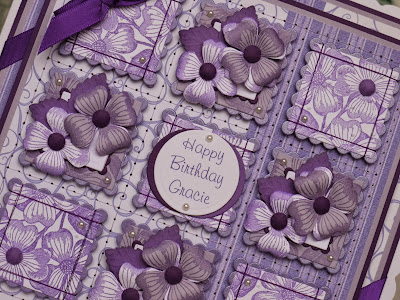 The white stamped squares were embossed using a random dots folder before being attached to the scalloped lilac squares and then purple thread was wrapped around the corners.  A shaped punched purple circle was added to the centre of one of the flowers using a foam pad and a pearl was added to one of the corners.
The lilac stamped squares had two smaller die cut squares cut from white and purple cardstock added on top.  Flowers which had been stamped, cut out, shaped and layered were then added along with purple leaves punched using an X-cut embossing punch.  Purple ink was sponged on to the tips of the leaves.  Shaped circles were also added to the centres of these flowers and pearls were added to two of the corners.

The toppers were then place on to a stitched square grid of nine 5cm squares using foam pads. This topper base was then attached to the base layers using foam pads so that there were three tiers to the card.  Purple ribbon was used to wrap around two of the corners of the base layer and to make a bow. 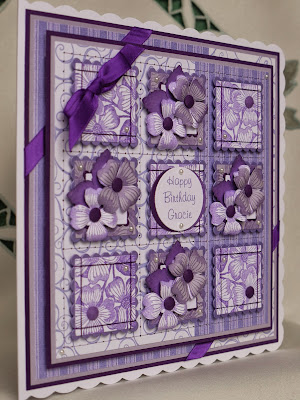 The sentiment was created on the computer and die cut and layered using Spellbinders plain circle nestabilities dies. 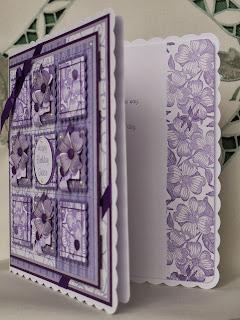 The verse on the insert was also created on the computer and the side edge masked off and decorated using the floral stamp.  A Woodware corner punch was used to round of the corners of the insert.

This is a picture I took earlier this year of Gracie with three of her grandchildren. 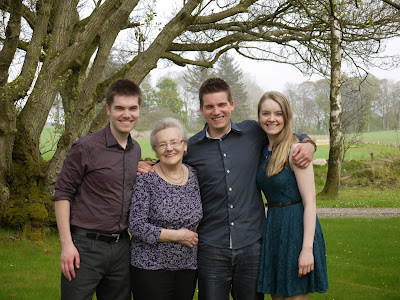 I'd like to enter this card in the following challenges
Chocolate, Coffee and Cards Challenge 49 - Flowers
Crafty Ribbons Challenge 64 - Anything Goes with Ribbon
Happy Campers Challenge 22 - Show us your Flowers
Top Tip Tuesday Challenge 111 - Flowers
Posted by Liz Miller at 03:47