Just recently Wilma, one of the ladies in our Tuesday crafting group, became Grandma to twin boys and this is the card I made for her.  At the last craft meetings at Janet's and Carol's both groups have been making pop up boxes and there have been some lovely cards made on birthday, baby and graduation themes. 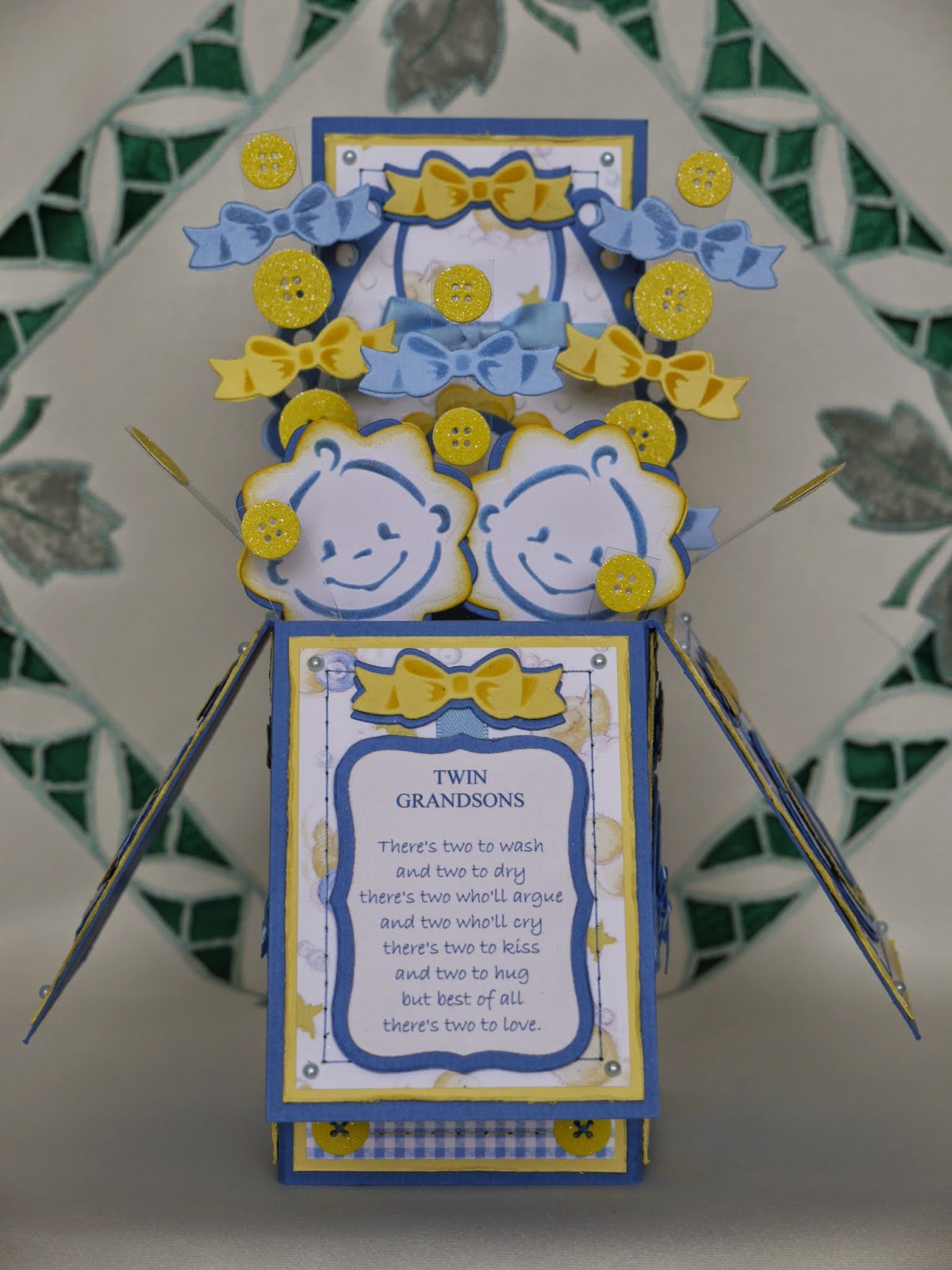 As well as using lemon and blue card stock patterned papers from the Cuddly Buddly download A Patchwork of Papers Blue and papers and elements from the Forever Friends Collector's Edition CDs were used.  Yellow and Blue stitching were added around the layered card and papers to add an extra frame.  The verse on the front was created on the computer and cut and layered using a Spellbinders labels die. 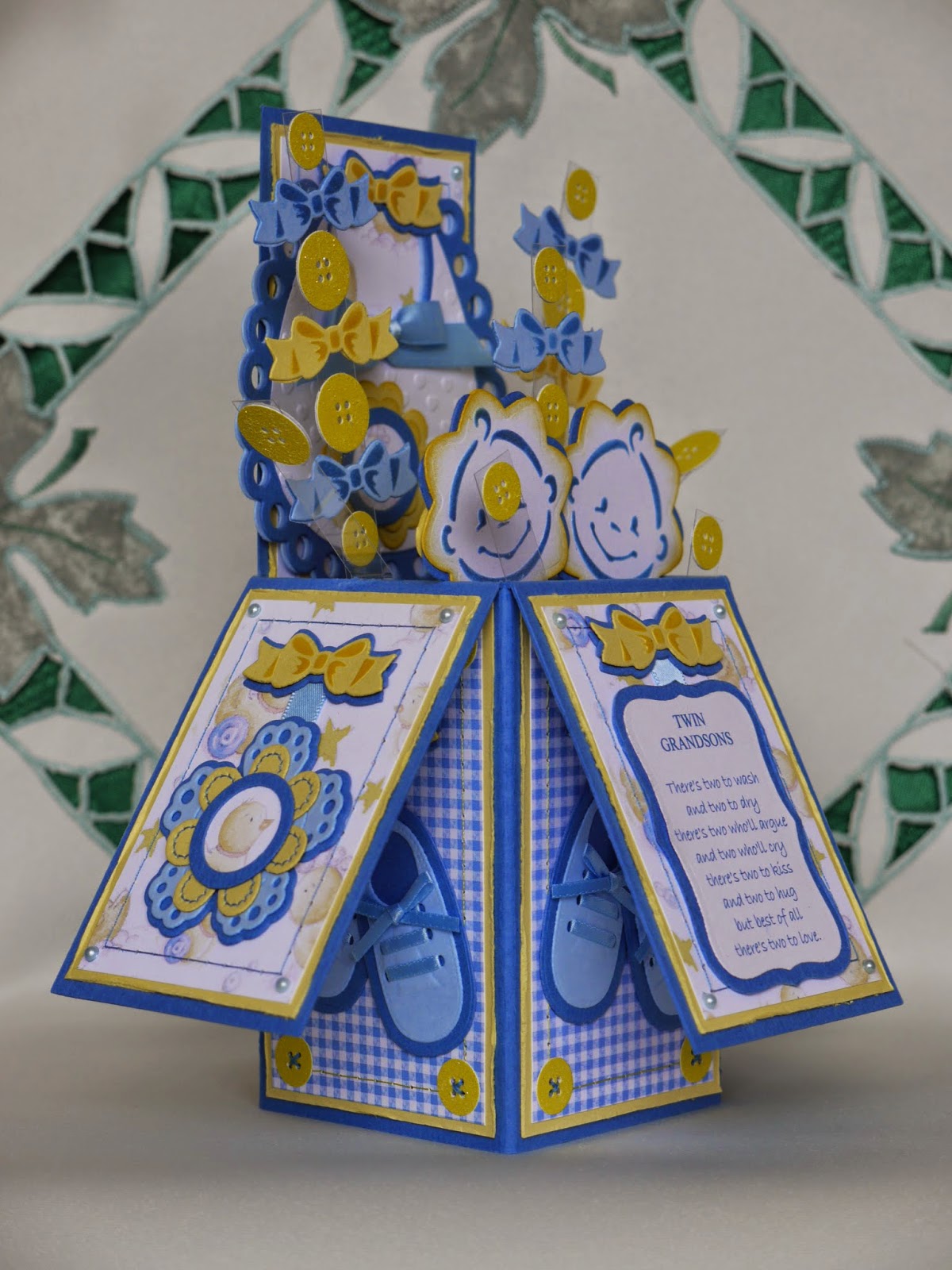 This card was made using a mixture of old and new crafting tools.  The new items used were the Marianne bib on the back of the card and the baby shoe dies used on sides of the box.  To make an extra top layer on the bib I drew around the inside of the die on to white card, cut it out and embossed it with a little hearts embossing folder.  The little bow from this die set is really cute and sponging ink through the die gives the bow more dimension 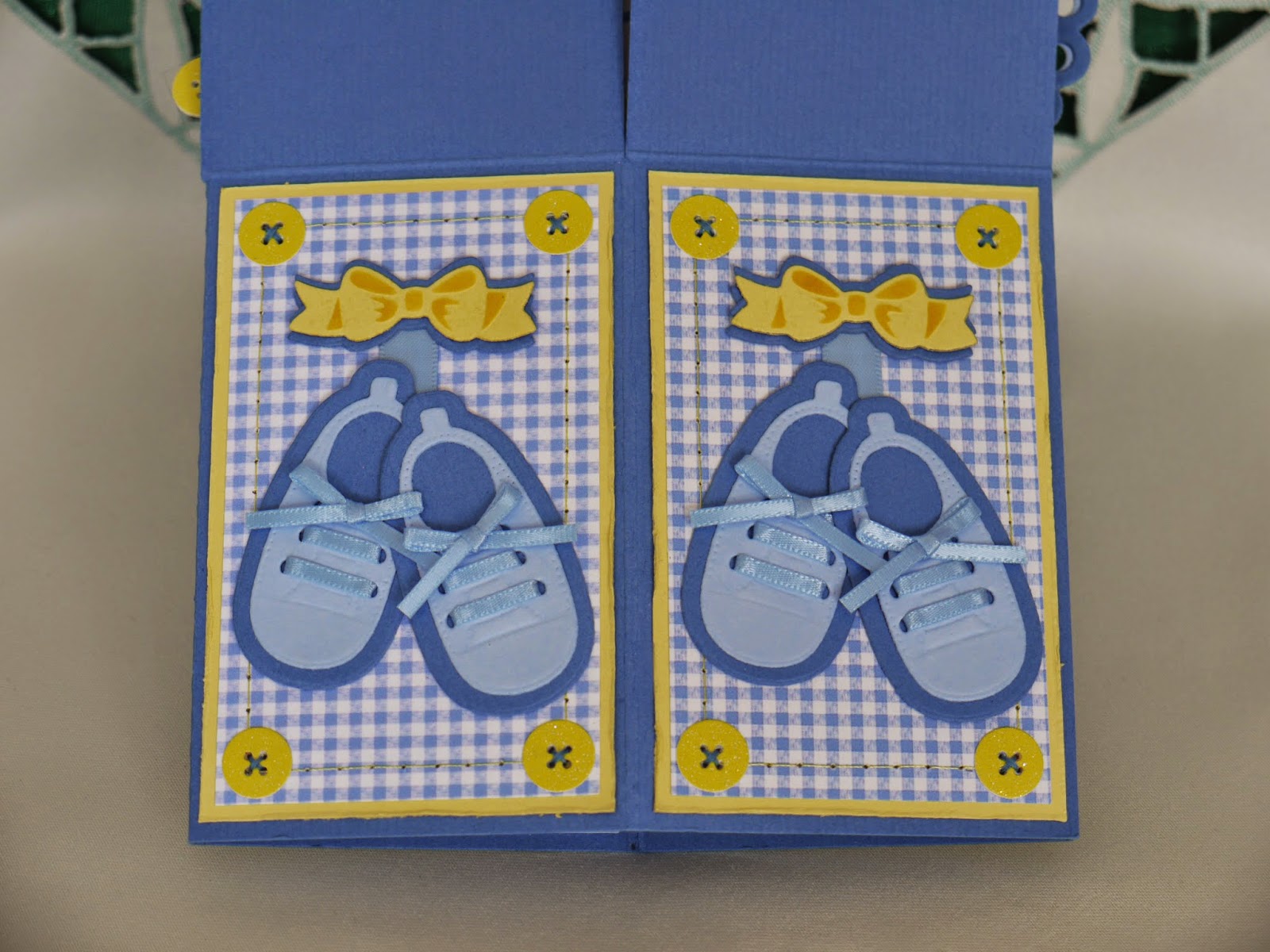 Marianne ribbon and stitching flower dies were used to make the backing layers for the framed ducky on the side panels.  The circle frame was made using Stampin' up's inch and three quarter inch punches. 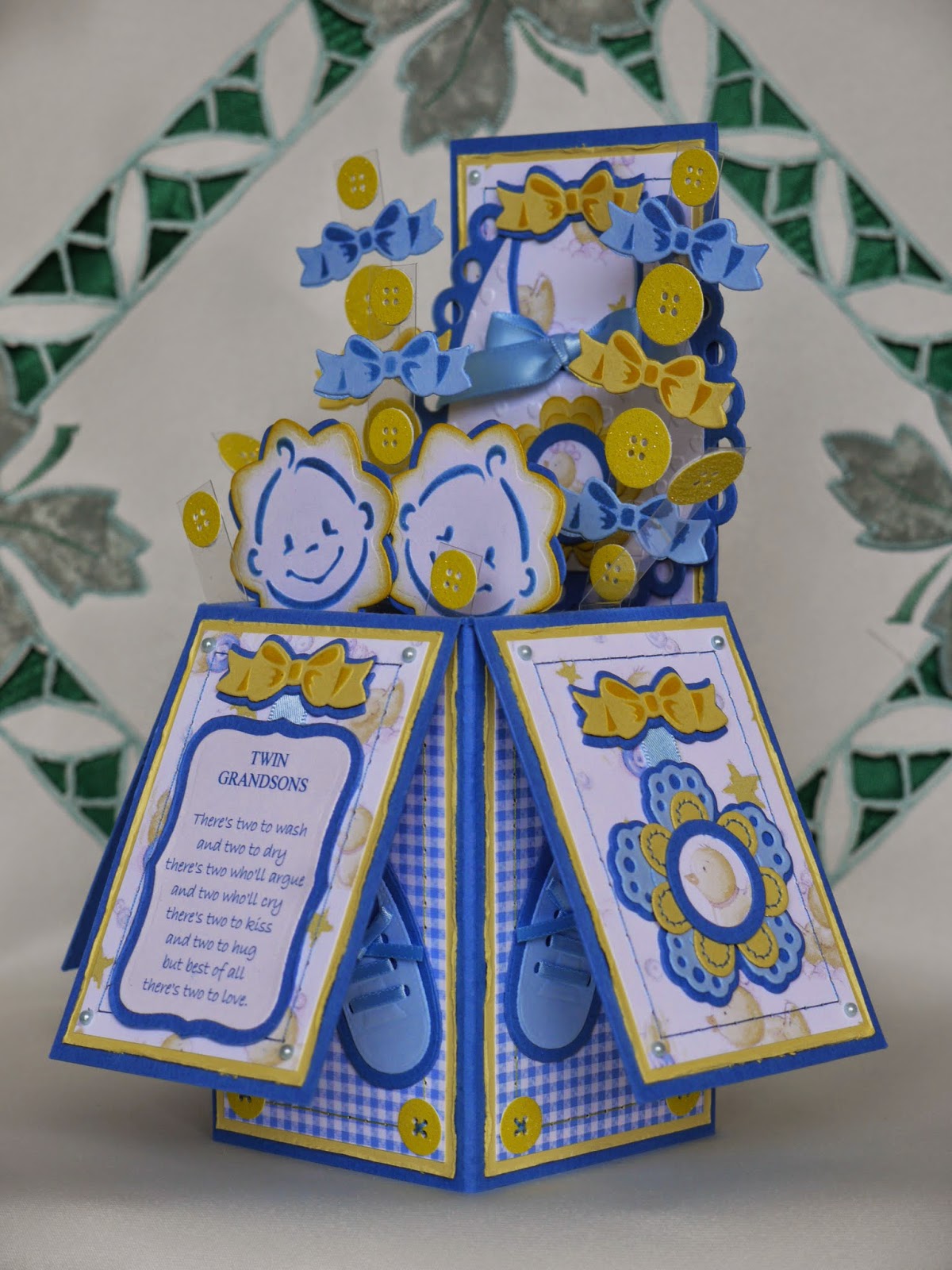 Buttons and bows was the theme for the pop up acetate strips.  The bows were die cuts from the Marianne bib die set and the buttons were cut from glitter card using a Quickutz die.

The two little baby faces were made with an Eline Pellinkhof brass stencil from The Stencil House.  This was the old item used and one of the first purchases I made from Create and Craft when Alan and Barry were the presenters.  The light box was dusted off and after embossing the first face blue ink was rubbed over the embossing whilst the stencil was still in place.  To make the second face the stencil was turned over to make a mirror image of the first one.  Spellbinders nestabilities star dies were used to die cut and layer them. 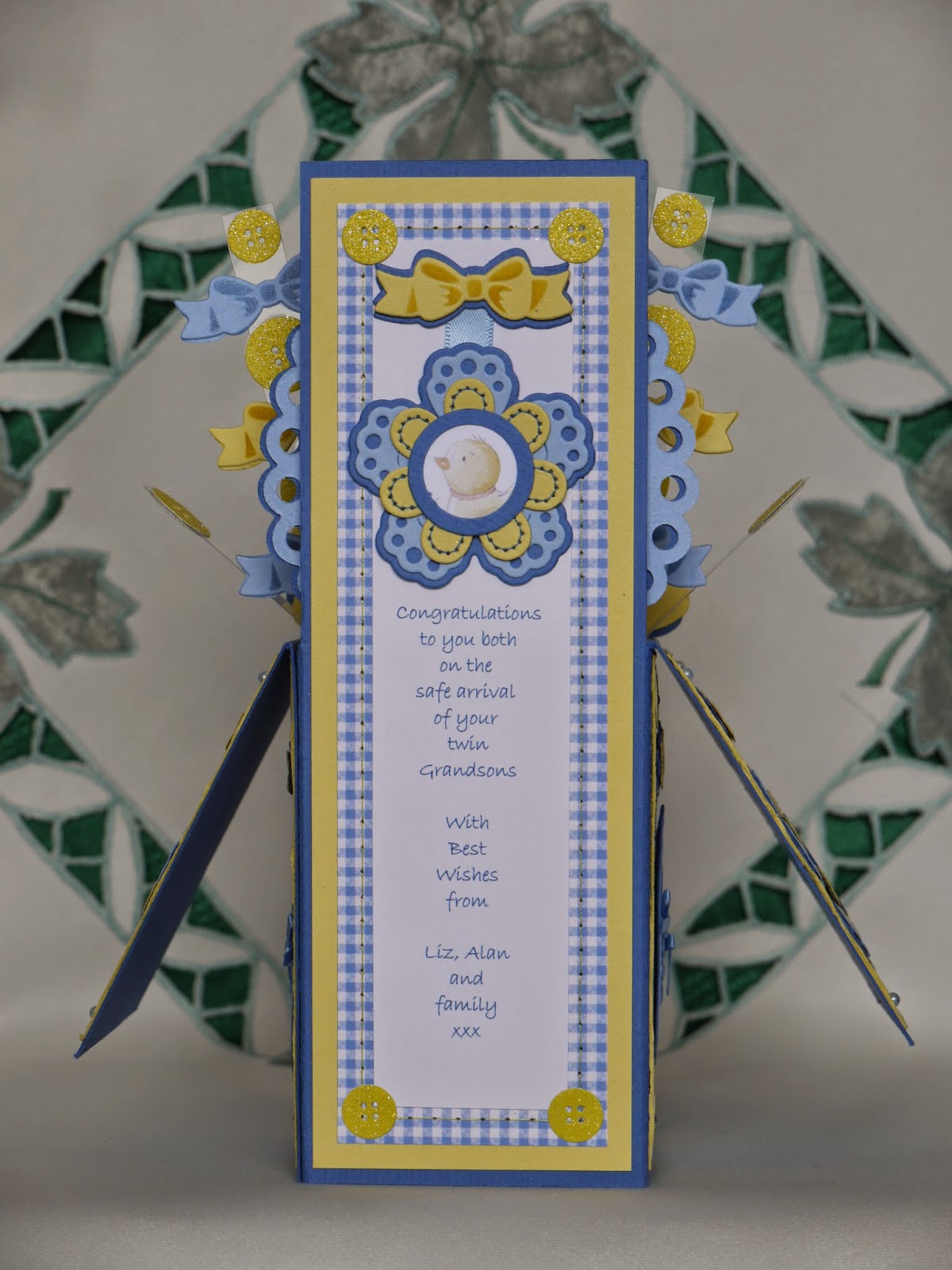 A message was printed from the computer and attached to the back panel.  The beauty of this style of card is that it fold down flat and the flaps fold up to protect the pop up parts so that it can be safely posted. 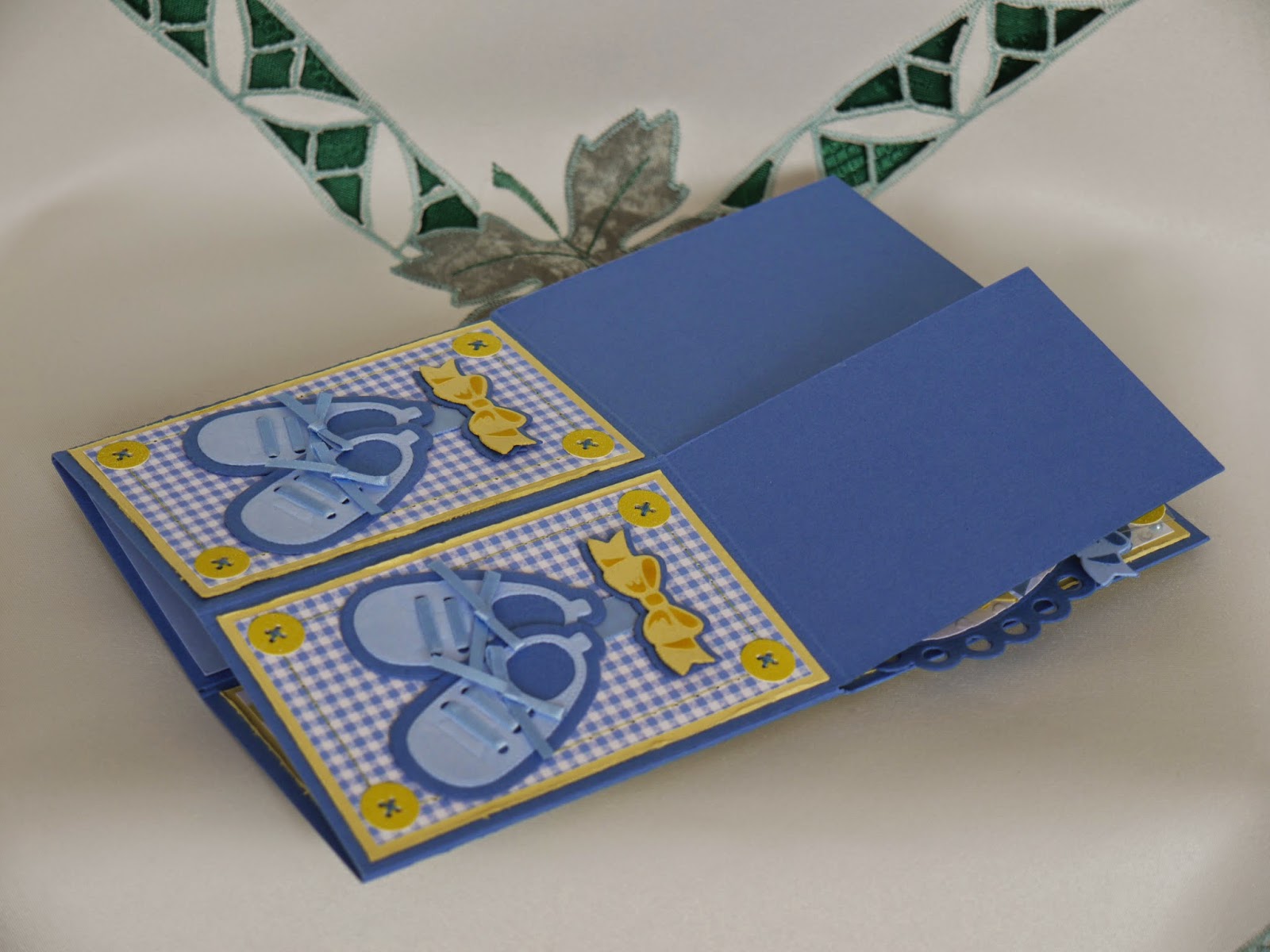