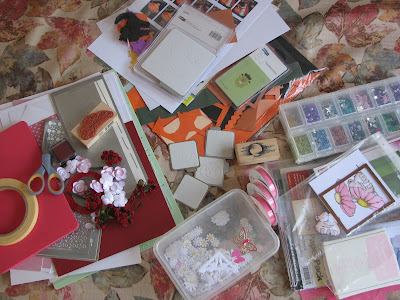 Thank you to everyone who came past my post for WOYWW? last week and left a comment.
This is what I've captured for WOYWW? this week.  Three projects started but nothing nearly finished.  On the left are bits and pieces I've gathered and have started to make another of those Coppernob Elegant Shoe cards.  I've already made five this year and had thought that was the lot but a new lady joined our Saturday crafting group and it's her Ruby Anniversary next month.  At least it will be a different colour scheme this time seeing as the other cards were three Pearl and two Silver Anniversary shoe cards.
In the middle of the picture are bits and pieces I've gathered to make the October ATCs for our Saturday crafting group but nothing started yet.  The theme this time is Hallowe'en which I'm sure you would have guessed from what's on the table.  After looking at someone else's desk last week I remembered I had the small moon stamp and thought I might be able use it in the layout.
On the right is what I've gathered together to make my entry for the Penny Black Saturday Challenge which this week is Monochromatic. Hopefully there will be a pink creation ready to enter before the deadline on Friday night.
Had a little spend this past week and today Postie brought the Penny Black stamp "Cheesecake Parade" which I bought on ebay and also the 2011 Heirloom Ornaments from Spellbinders.  After seeing Erika's demos. on Saturday I decided to treat myself.  I love the way it can be used flat, tiered and 3D.  More to play with. 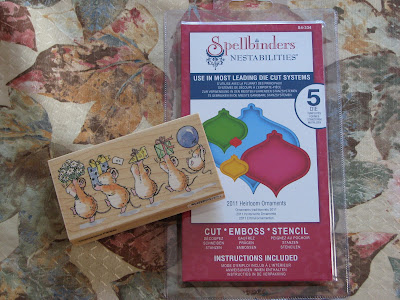 Right, I'd better away and see if I can complete something out of this mish mash before next WOYWW?  Hopefully it all won't still be sitting there.  Happy crafting to everyone until next week.
Thanks for reading today
Liz xx
Posted by Liz Miller at 06:17