A Pocketful of Good Wishes 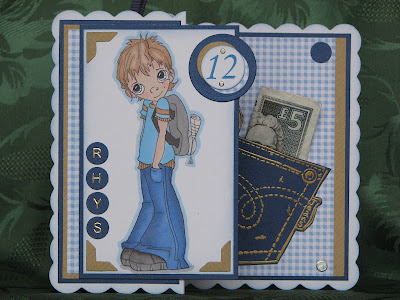 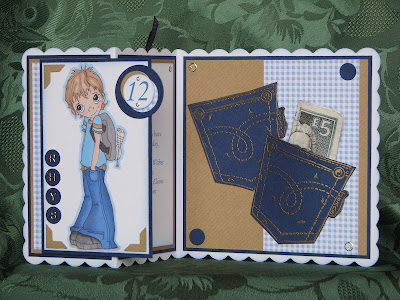 This is a card I've made for Rhys, a friend's grandson.  His Mum Sarah was just eight years old when we moved in to this street and became friends with the family and as time went on Sarah began to refer to me as Auntie Liz.  Even at that early age she had a strong mothering instinct and when our Ian was born she would come round to play with him and take him for walks.  She became a mum herself at a young age and with the support of her family and husband she's done a brilliant job in bringing up her daughter and son.  They are two lovely young people and a credit to her.

It's hard to believe that Rhys is twelve already and as soon as I saw this digital stamp called Smitty, by Krista Smith of Saturated Canary, I thought of Rhys and decided to make a card for him using it.  Here's a picture of the birthday boy himself. 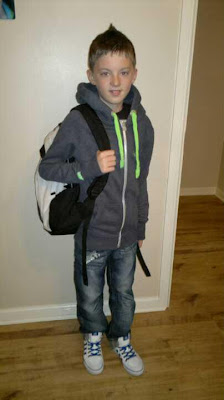 The main image is coloured using Promarkers and then following on with a pocket theme I used the Woodware wooden stamp Jeans Pocket to stamp, emboss and cut out pockets to decorate the panels and also to make a backing paper.  The top of the pockets were left open to add a contribution to Rhys's birthday fund and tags with messages.  The gingham backing paper is from the Cuddly Buddly download A Patchwork of Papers Blue. 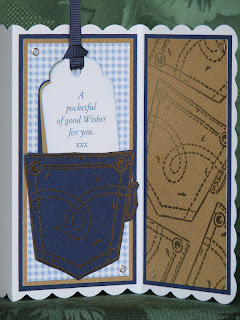 The messages and personalised number and backing layers were printed from the computer and cut out using a red Sizzix tags die and circle Nestabilities dies.  The smaller circles, used to back Rhys's name, were punched using a Woodware half inch circle punch and the kraft corners were cut using a Quickutz die.

The edges of the card and some of the toppers were sponged with Stampin' up's Bashful Blue ink and their Nearly Navy grosgrain ribbon was added to the tags.  A few peel off crystal dot stickers were the final embellishments.

Thanks for reading
Liz xx
Posted by Liz Miller at 04:18