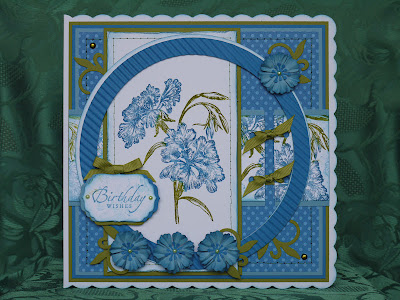 This is my entry for the Penny Black Saturday Challenge which this week is casing the card below made by Kath.  I used Kath's layout, card base and floral main image and embellishments for inspiration and used products from Stampin' up in their Marina Mist, Old Olive and Pacific Point colourways. 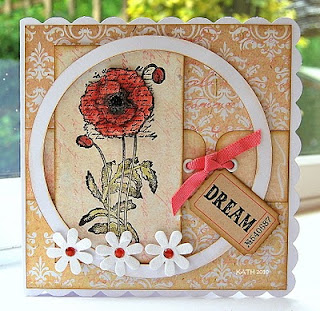 The main image is Awakening by Penny Black which is my favourite stamp at the moment.  It was coloured using Marina Mist, Pacific Point and Old Olive markers and then spritzed with water before being stamped on to white card.  To create a decorated strip for the band behind the main image the stamp was spritzed with water again and restamped. This was repeated until the stamp needed to be coloured again.  The edges of the topper were distressed and Marina Mist ink was sponged over them.  Stitching with green metallic thread was added around the edge to create an extra frame.

The ring frame was cut using Grand Nestabilities and because it was having to sit on top of uneven layers an additional ring in white was cut, the edges sponged with Marina Mist and then the two were layered to make a stronger frame.  I wanted to add embossing to the blue ring but as I don't have any of Grand Calibur embossing stencils I felt a bit stuck until I discovered that the barrel of the Fiskars ribbler was wide enough.  The Birthday Wishes sentiment is from Stampin' up's Sincere Salutations set inked with Marina Mist ink, stamped on to a faded image from the Awakening stamp and die cut and layered using a Nestabilities Labels Four die. 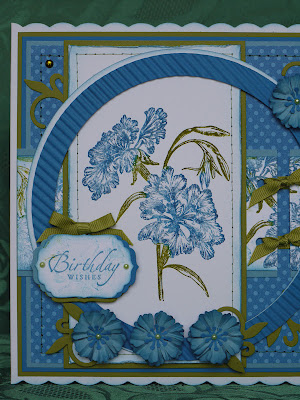 The plain card stock is Stampin' up's Marina Mist, Pacific Point and Old Olive and the patterned paper is from their Brights Collection in the Designer Series Papers.

The flower embellishments were made using a flower X-cut Embossing Silhouette Punch and an L-Em stamen punch.  For each one two flowers were punched from Marina Mist card and Marina Mist ink was sponged around the petals before they were scrunched and then the flowers layered.  The stamens were punched from Pacific Point card and a green pearl from Hobbycraft was added to the centre.  The vine leaves were cut from Old Olive card using a Vine die from Quickutz.  The ribbon used was also Old Olive.

I wanted to add green brads to the corners but didn't have any in a matching shade of green so I coloured round silver brads with a Pear Green Promarker and this gave the shade I wanted.  They take a little while to dry but I'm keeping this in mind for future projects where I want matching brads.

Thanks for reading
Liz xx
Posted by Liz Miller at 02:56