Carrying on from the wedding theme in yesterday's post this is a wedding cake card I've made this week.  It was an order from a friend of a friend and the guidelines were that it was a second time marriage for both of them, something pretty and perhaps lilac as the colour scheme.  I basically had free creative reign so hopefully this meets the criteria as I certainly enjoyed making it. 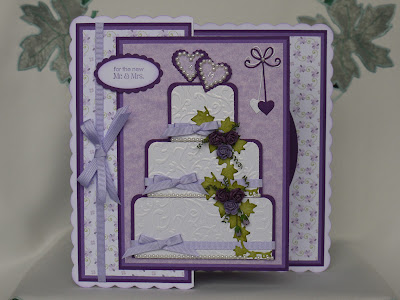 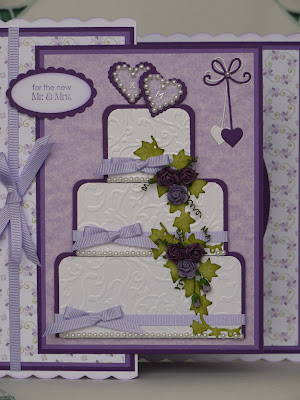 I usually make shoe cards for weddings but this time chose to case the wedding cake card we made at Carol's  Stampin' up class and scaled it up to make a topper for an 8" square scalloped card.  The cake pieces were rectangles cut from Crafter's Companion centura pearl card which then had their two top corners rounded before being embossed using a swirls embossing folder from Docrafts. The pieces were backed on to darker purple card from the Papeterie to leave a quarter centimeter border around the sides and top.  Lilac grosgrain ribbon was wrapped around each piece before they were attached to each other.

The trailing ivy was cut using a die from the Marianne Creatables Ivy die set LR0206 and attached to the ivy are 10mm paper roses from Wild Orchid Crafts.  The paler rose was originally white but I used a lavender Promarker pen to colour it.  The white paper roses are ideal to colour this way as, using the chisel end of the pen, they soak up the ink as soon as they touch the nib.  The little buds were also coloured this way. 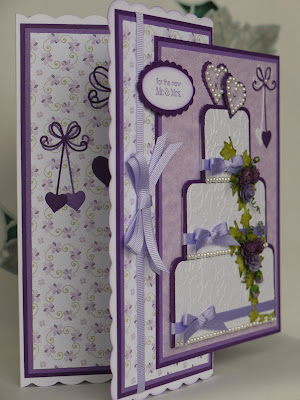 The cake was attached to the topper using foam pads and then ribbon bows and self adhesive pearls, to represent piped icing, were added.  The hearts at the top of the cake were cut using Spellbinders plain and scalloped hearts dies and self adhesive hearts from Hobby House were added on top.  The couple's initials were added inside the hearts using peel offs.

The sentiment was stamped using a stamp from the Stampin' up set Petite Pairs with Encore purple metallic ink and then punched out using their plain and scalloped oval punches. Purple Encore metallic ink was also used to sponge around the scalloped edges of the card, around the sentiment and around the message panel on the inside.  Die cuts made using the Precious Hearts dies from Memory Box were used to decorate the panel behind the front of the card and on the topper. 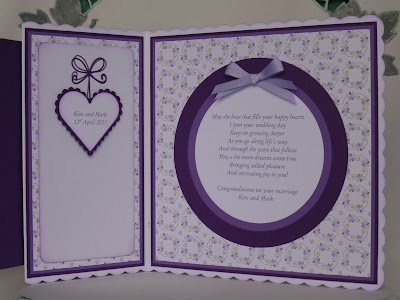 Attached to the inside is a printed verse which was framed using Spellbinders grand nestabilities circles dies.  On the opposite flap the couples names and date of marriage were framed using Spellbinders heart dies.  The hearts were attached using foam pads so that they looked as though they were suspended from the die cut bows from the Precious Hearts dies.  The space below is for a message to be written. 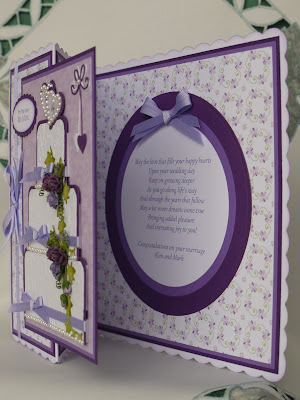 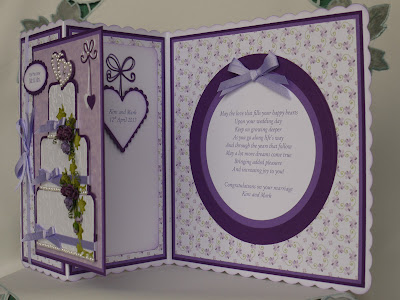 The patterned paper for this card came from the Nitwit Collection download Time for Tea.  I really like this collection as it uses purple and green which is one of my favourite colour combinations.  The paler purple card is from W Enterprises.

Hope you've enjoyed the tour around my wedding cake today.
Thanks for reading
Liz xx

I'd like to enter this card in the following challenges
Wild Orchid Challenge 74 - Purple and Green
The Ribbon Girl April Card Challenge - Add Flowers
Make It Monday - Anything Goes
Stamping Sensations April Challenge - Special Occasions other than Birthdays
Posted by Liz Miller at 02:29