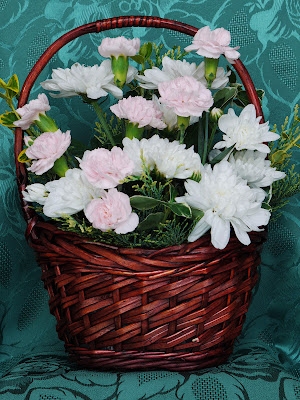 This is a lovely basket of flowers I was given from one of my friends last Friday.  I'd gone to visit Lilian the day before, because she was housebound following an operation, and had brought her some flowers because I knew she liked flower arranging and thought it might be something for her to while away some time with.  It was a lovely surprise when she brought some back for me to enjoy.

The following day we were having our Saturday monthly craft group meeting and our project for this month was flower pot cards and I used Lilian's basket as inspiration.  Sandra had sent the group a link with this tutorial on how to make them and this was the end result. 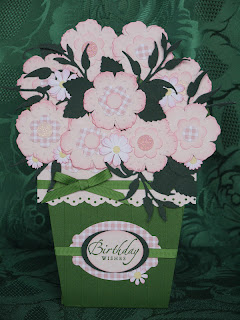 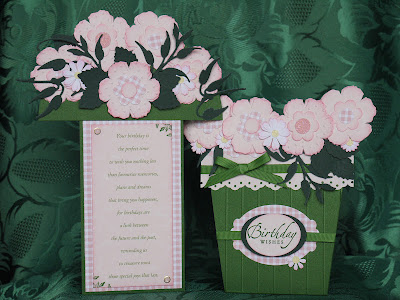 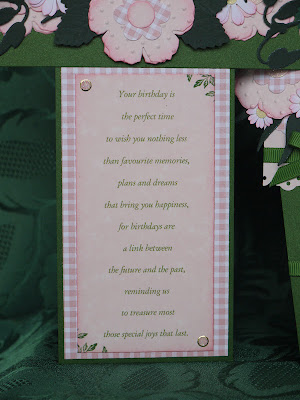 This flower pot card is actually a bigger version based on the tutorial.  Having seen examples on blogs where a stand was used to allow the card to be stood up I decided to make one where Tim Holtz's alterations die small easel would fit the back of the pot.  However, after also making a flower pot following the tutorial, I've since discovered that the easel will also fit this size as the flower top hides the part of the easel which extends above the pot.

To make the flowers and foilage for the top Tim Holtz's Sizzix die Tattered Florals,  Woodware medium flower and daisy, small daisy and half inch circle punches, a Marianne Creatables leaf spray die, an X-cut embossing leaf punch and the Swiss Dots Cuttlebug embossing folder were used.  The pale pink card used was from W Enterprises and the edges of the flowers sponged with ink from the Brilliance ink pad Aurora.  The gingham paper was printed from the Nitwits download  Thimbles 'n Threads and the green pearlescent card used for the pot was from The Papeterie.  Stampin' up's Garden Green ribbon and ink, Birthday Wishes sentiment from the set Sincere Salutations and eyelet border punch were also used.  A small leaf peg stamp from the Tapestry Stamp Set Heart Deco was used to stamp the leaves on the corners of the message.  Nestabilities dies were used to cut the sentiment and backing layers.

I intend to give this card to my friend's Mum who lost her husband at the beginning of the year and used the internet to find a suitable verse to add to it.

After finishing the larger pot I decided I'd try out the smaller version to make a thank you card for Lilian and this was how it turned out. 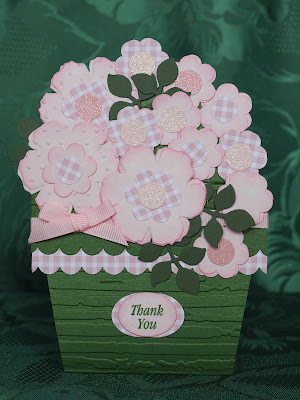 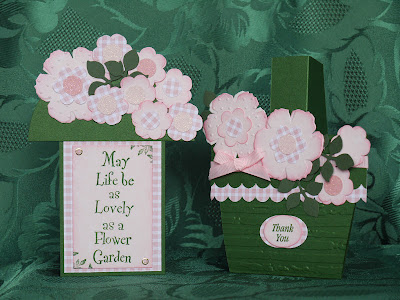 The smaller pot was made using almost the same materials and equipment although this time the leaves were cut using a Quickutz die and the scalloped border edge was cut using a Stampin' up border punch.  The stamped message was made using a Hero Arts stamp and the Thank You sentiment stamped with a small Hobby Art stamp.  Here are some pictures of the two pots together. 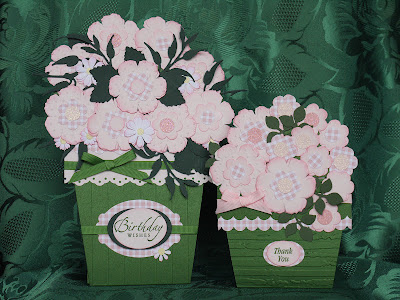 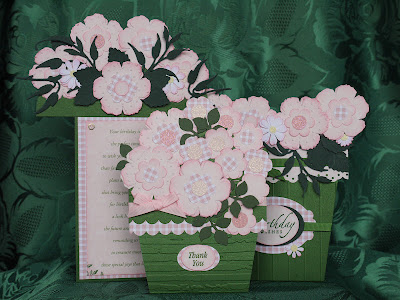 I really enjoyed this project, as you can probably tell by all the photos, and the ladies in the Saturday group produced a variety of different pots from sunflowers, funky flowers, fabric flowers and in all  different colourways.  Christmas pots and poinsettias were being mentioned too.  Don't be put off by the fussy tops I've made on these cards as there are some lovely examples out there where three large blooms and some extra leaves have been used to create really pretty cards.  You can adapt it to suit yourself.  Some of the ladies at our Tuesday Crafting Bee had a go at making them this week too and Carol posted a lovely yellow version on her facebook page yesterday.