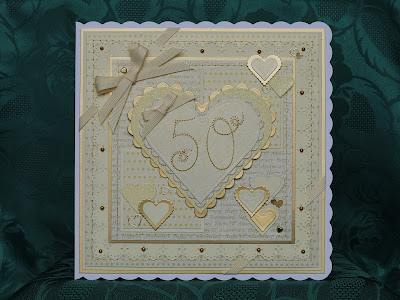 It's the Golden Wedding Anniversary of an Auntie and Uncle on Thursday and this is the card I've made to send them.  I've still got the little deep peach dress with it's crinkly petticoats that I wore as their flower girl.  Unfortunately the floral circlet to match and the blonde curls that were underneath it wilted a long time ago.

The card is cased from the anniversary card in the previous posting.  Rather than having a white background to the patterned papers colour 25 from the canvas backing papers on Joanna Sheen's Secret Garden CD was printed on to white pearlised cardstock first before putting it through the printer a second time to add the wording and asterisk pattern.  Other extras were a bow and gold self adhesive pearls. Like the previous card there is a double insert in the inside.  The Martha Stewart punch around the page set eyelet lace was used to give the outside layer a decorative edge to match a layer on the front of the card.  The little card in this picture is a matching one for Elaine and Ian to give them. This card uses the same cardstock but one of the layers has been pricked using an Ornare template.  I've made cards similar to this before and have made quilled flowers to add as embellishments but this time the small English Rose and leaves dies from Marianne Creatables were used.  The cream leaves were punched using the botanical beech leaf embossing punch from X-cut.  A bow, brads and self adhesive pearls were the other embellishments used. 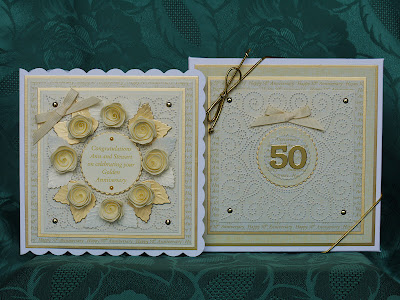 To protect the flowers on this one, as it wends its way up to Orkney, I made a little box to put it in and lined it with gold tissue.  Here are the two cards together. 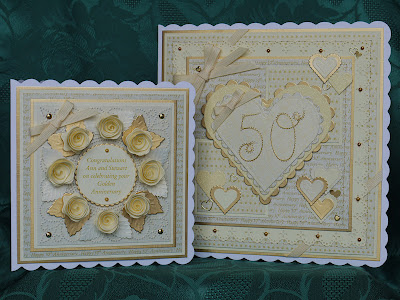