Last month our neighbour Euan turned thirteen and this is the card I made for him.  Although he has musical talent he's also a very sporty young lad and I decided to go with this theme for his birthday card as he'd recently been named player of the year for one of the local football teams. 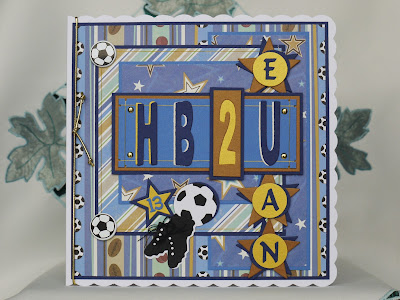 The patterned papers came from a masculine themed pack from Dovecraft and they also dictated the colour scheme.  Sometimes you have a good idea how you want a card to turn out and sometimes it just evolves as it goes along and this was one of those evolving cards.  The inspiration started from the card below made by Alina.  I always get stuck with making masculine cards but when I saw this one I liked how a general HB2U card could be personalised with embellishments.  For Euan's card I used Quickutz dies to cut out a football, football boots, a framed star and the number thirteen.  Two football brads were also added. 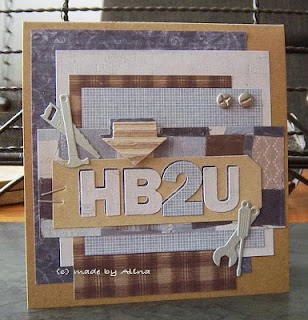 The HB2U sign was made using Sizzix sizzlits dies.  The letters were cut twice and layered to give a shadowed effect and the negative from the die cut was used for the 2.  The corners of the sign was punched using a Woodware corner punch, gold thread wrapped around it and gold brads added to the corners.  Gold thread was also added to one of the other backing layers.

It was whilst setting out the different layers to decide where to place them that the card started to evolve as I realised that Euan's name could also be worked in to the layout linking in the letter U.  Carrying on the star theme from a backing paper and embellishment more stars were cut using a Sizzix red die and then layered with one inch circles punched, layered and added on top.  The other letters of Euan's name were cut using Quickutz dies and added to the centres of the circles. 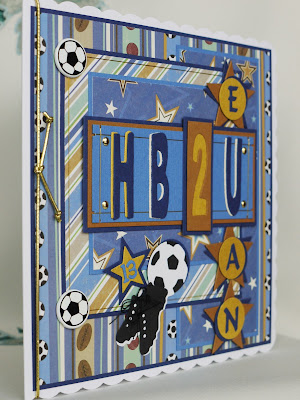 The final touch was tying gold elastic cord around the card and a very personalised card was completed.