She's not really going to seed but Sandy, who's a member of our Crafting Bee group, celebrated her birthday back in the middle of June and this is the card I made for her.  Earlier in the year she had been using a stamp from the Woodware stamp set Going to Seed to make cards at one of our meets and a few us had admired it so much that Carol placed a bulk order for us.  When it came round to Sandy's birthday I decided I'd make her card using this stamp as a thank you for sharing her inspiration. 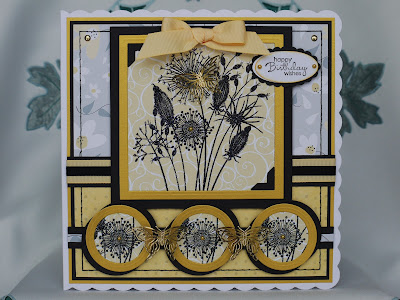 The stamp was inked with VersaMark ink and stamped on to Pink Petticoat's Little Swirls patterned paper in the Goldenrod colourway. It was heat embossed using Stampendous Disco Black embossing powder which has a lovely black and silver sparkle in daylight but in night light it becomes a rainbow of colours.  The topper was framed using Spellbinders square nestabilities dies and the small corner embellishments were cut using a Quickutz die. 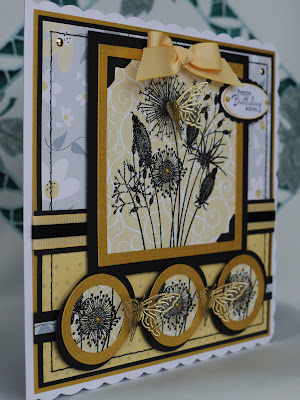 The Spring Wishes backing paper from Pink Petticoat's Isabelline collection was used on the top half of the card and below that was a backing paper from the NitWit collection Time for Tea printed in greyscale on to mustard coloured card.  Part of the stamp was also embossed on to the Spring Wishes patterned paper to create the three embellishments below the topper which were framed and layered using Spellbinders circle dies. 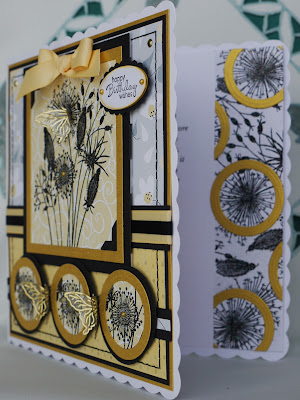 I can't make a card without adding ribbon somewhere so Stampin' up's So Saffron and Black grosgrain ribbons were used on this one.  The sentiment was stamped, punched and layered using a stamp from their Petite Pairs set and their small oval and scalloped oval punches and ink from a gold Promarker pen was sponged around the edge of the sentiment.  A border was stitched around the edge of the card using black thread and the final little touches were the addition of gold pearls from Hobby House, gold brads and peel off butterflies which had been attached to acetate. 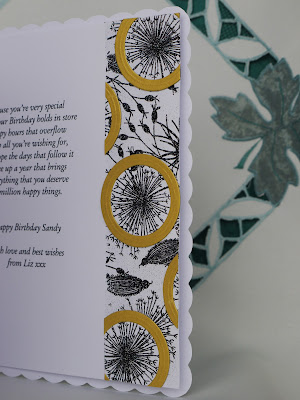 The side edge of the insert was masked off and decorated to match the front of the card.

Thanks for reading today
Liz xx
Posted by Liz Miller at 01:33