Ninety Years and a few Days

Recently Bobby, a friends Dad, celebrated his ninetieth birthday and this is the card I sent him.  It's based around the twenty-first and eighteenth cards I've made recently but the numbers on the centre topper were stamped using Papermania clear stamps which were overlapped in the style of the Woodware stamps I'd used for the other cards. 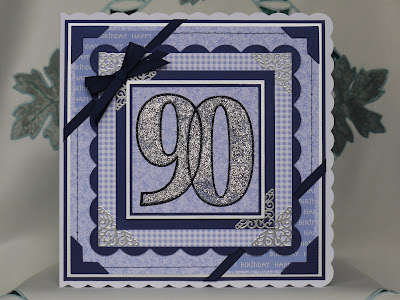 The patterned papers are from the Cuddly Buddly download A Patchwork of Papers Blue.  The  stamps were inked using VersaMark ink and then embossed using disco black embossing powder from Stampendous.  Once this had set the ninety was die cut using a square Spellbinders die and the inside of the numbers were filled with art glitter glue and silver glitter. 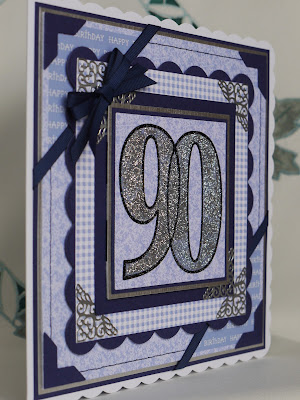 This card was also put together in three tiers.  On the bottom one there are layers of blue pearlescent card, silver embossed card and a blue patterned paper.  The corners of the patterned paper were either stitched or had corners added on top made from the Happy Birthday paper.  Corners cut from the blue card using a Quickutz die were added on top of this.

The 90 topper was layered on to the blue pearlescent card and textured silver card and was the third layer.  The usual embellishment of ribbon and a bow were added.

A birthday party had been planned for Bobby's special "0" birthday with my friend and her two youngsters travelling up from North Wales to Orkney to celebrate with him.  After having been unwell through contracting shingles the celebrations were put on hold and a quiet day at home was planned instead.  Bobby became unwell on his birthday and through the following week he had a few ups and downs and shortly after being released from hospital yesterday he passed away at home.  Unfortunately his passing was a traumatic experience for his daughter and her young family and I imagine it will be one that will stay with them for some time to come.  Hopefully, with time and the support of family and friends, it will get easier for them.  Thinking of them all today.

Thanks for reading today
Liz xx
Posted by Liz Miller at 00:59