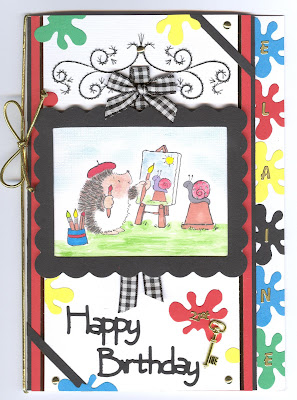 This is my entry for the Penny Black Saturday Challenge this week.  The challenge was to include stitching, faux, real, hand or machined, in the project.  I must admit I love pricking and stitching on cards and tend to go through phases of using it.  It's something I can pick up and set down without making the usual mess of creativity around me.  Well that's what I like to call it but my son has been heard to say that "the dining room looks as though a grenade has been thrown in it". The stitching on this card is meant to represent a picture sconce.  The inspiration came from the packaging of the pricking stencil used which was one of the Marianne design Suzy's Stencils - Suzy 008.
This card was an order for an art student's 21st birthday so I took art as the theme .  The Penny Black stamped image is Portraiture - 3202K and was stamped with Stazon and coloured with watercolours and Promarkers.  The paint splodges were made using a Quickutz die.
When making 21st and 18th birthday cards I like to include a little key somewhere and whilst writing this blog entry I realised that the tradition of giving a key, in some form, doesn't happen to the same extent anymore. Somewhere in the attic I know I have a box of boxed keys, number plates and cards which I received on my twenty first birthday.   I then wondered what the tradition behind giving the key was about and this is what I found.
"This tradition dates back to the times when children lived at home until they married, and were very much under the control of their parents. The voting age was twenty-one, when 'adult status' was officially conferred and a front door key was issued for independent access to the family home. As an adult, you were considered free to come and go as you pleased rather than according to your parents' wishes. Thus, you were now entitled to "the key of the door". (It's a British tradition.)"

I guess the more liberal age we live in nowadays has reduced the significance of this tradition.

Thanks for reading
Liz x
Posted by Liz Miller at 15:30