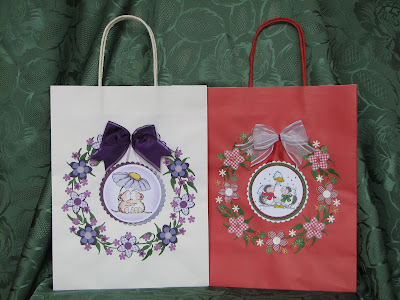 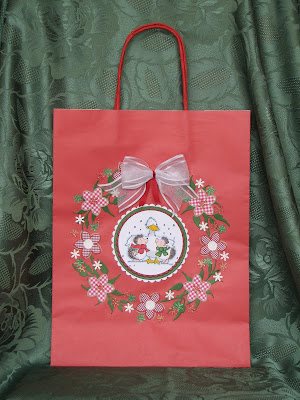 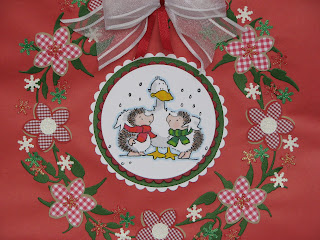 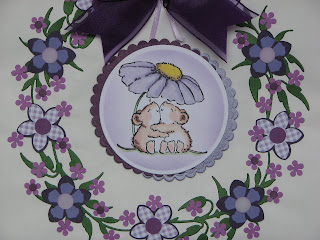 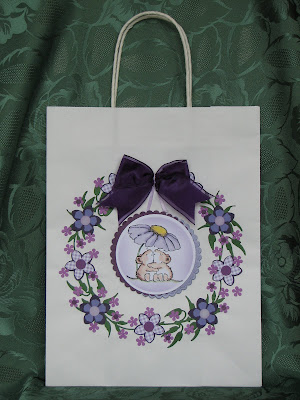 During our craft group's July meeting it was decided that for our August meet we would bring along bits and pieces to decorate paper gift bags.  Norma had brought along a selection of coloured bags from Hobbycraft to share with us so I chose a couple so that I could have a play at home too.
The main images on both bags are stamped from Penny Black stamps and are coloured with Promarkers.  The embellishments were made using a mixture of diecuts and punches.  Most of the die cut flowers were a gift from Linda Goble to which I added a few flowers cut using Tim Holtz's tattered floral sizzix die and the centres were punched out using a half inch circle punch.  The leaves were cut using a Marianne die, which I had borrowed from Sandra in our group, and the smaller flowers and snowflakes were made using my own small punches.  To finish it off bows were added at the top made from the many reels of ribbon I have purchased from Costco.  I have difficulty in making something without adding a bow somewhere.  Even male cards get adorned with ribbon.
Although we were catching up with each other's news and the latest gossip in the crafting world, we all worked away on our projects during the afternoon and made very different bags with lots of different techniques.  Along with good company and Janet's home baking what more could you ask of an afternoon.  Lorraine joined us for the first time so I hope we made a good impression on her.
I'd like to enter this project in the following challenges
Creative Craft Challenges - Anything but a Card
Penny Black at Allsorts - Free and Easy
Craft Your Passion Challenge 71 - Anything but a Card
Allsorts Challenge 116 - Anything but a Card
One Sititch at a Time - Anything Goes
Paper Playtime Challenge 53 - Anything Goes
Totally Gorjuss Challenge 93 - Round and Round
Kaboodle Doodles Challenge 80 - Bag It or Tag It
Try it on Tuesday - Anything Goes
Thanks for reading
Liz x
Posted by Liz Miller at 03:29