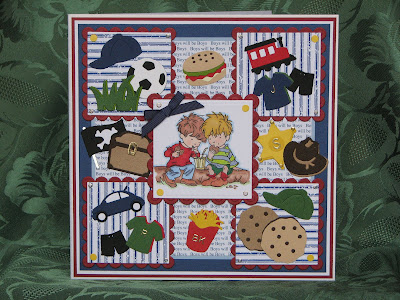 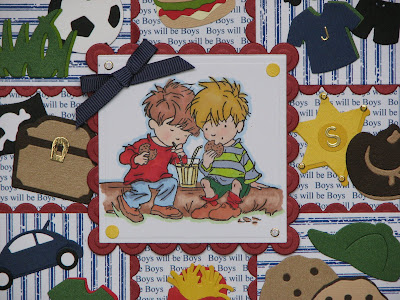 I hope I haven't got you singing Rolf Harris's classic "Two Little Boys had Two Little Toys....." after reading the title to this post.  This is the end result from the chaos that was on my table yesterday and it ended up going together fairly easily after the frenzy of die cutting the night before.  All those scraps that you can't throw away come in really handy when doing a project like this.  This is a card I made for a friend to give a couple who have just successfully adopted two little boys.  The main image is from a Lily of the Valley stamp called Milk and Biscuits and when I spied it I knew this was the one for this card.  It's the first stamp I've bought from this company and it stamped out really cleanly.  It was coloured using Promarkers.
The background papers were made using the Hero Arts Large Canvas Stripes stamp and the Boys will be Boys paper was computer generated.  Besides the backing squares, which were cut using nestabilities dies, all the other embellishments were made using Quickutz dies.  I tried to select those that were typically boy themed and I was briefed that one of the boys likes cars and the other likes trains.
Although I felt under pressure to put this card together it turned out really colourful and hopefully represents the fun elements of having little boys around.  No smelly socks in sight.
I'd like to enter this card in the following challenges
Paper Creator's Crafts - Red and Blue
Sparkles Forum Challenges 18 - One for the Boys
The Craft Garden - August Challenge- Bold, Bright and Loud
Make it Monday 50 - Anything Goes
Cards for Men Challenge 17 - Anything Goes
Lothian Crafts Online Challenge 17 - Anything Goes
Paper Playtime Challenge 53 - Anything Goes
Try It On Tuesday - Anything Goes
Paper Crafting Journey  Challenge 17 - Anything Goes
LOTV Ideas To Inspire - World Card Making Day Challenge Oct 1st 2011

Thanks for reading
Liz x
Posted by Liz Miller at 00:13