We had our monthly craft meeting on Saturday and our theme this time was One Sheet Wonder Cards.  This card making technique involves taking a piece of patterned paper, double sided patterned paper or creating your own patterned paper and then cutting it up to create pieces to use on a number of cards.

Before the meeting I made a set and used Wendy Janson's one sheet wonder template as a guide to cut the patterned paper.  The measurements had to be adjusted slightly as Wendy had used paper measuring 8.5" x 11" and I used an A4 sheet.  The patterned paper used was printed from the Niwit Collection Thimbles 'n Threads  and here are the cards made using it. 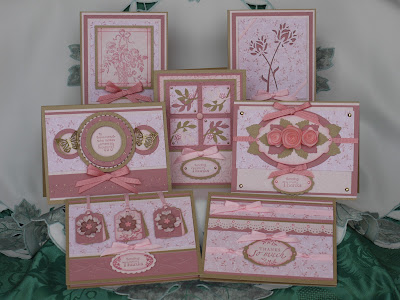 These cards are slightly larger than A6 in size as the base cards were cut down from square craft cards.  I made this a double challenge as I tried to make each card tell a little story about how my card making has grown and some of the influences along the way. 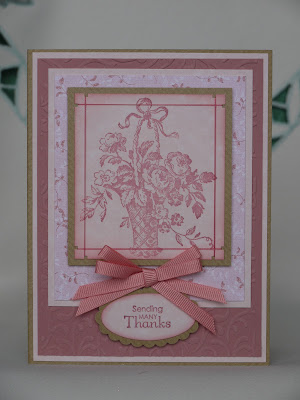 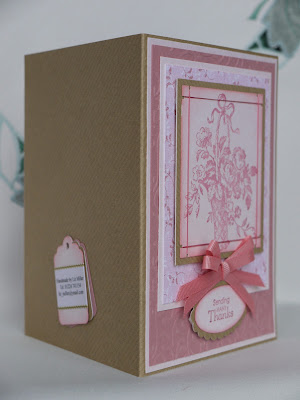 The card above represents where my card making first started. The stamped image is from an Anna Griffin stamp and it was after watching one of her shows on QVC that I decided to try scrapbooking.  To practice some of the different techniques I started making cards, went to a stamping class at a local craft shop, and never looked back.  Ten years later there are still only four completed pages in my scrapbook.

As well as watching programmes on QVC I bought magazines to learn more and used to enjoy reading stamping articles by Kim Reygate.  She frequently used a notched corner punch to decorate corners, and sometimes wrapped thread around her toppers, and this is something I frequently do to add an extra frame to a topper. 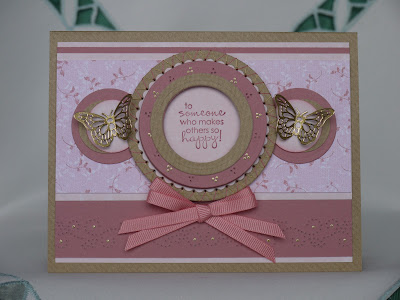 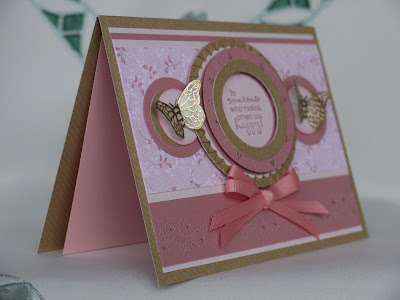 As well as watching Anna Griffin on QVC I also watched Dawn Bibby's Shows and picked up numerous ideas and tips.  On this next card this is represented by the peel off 3D butterflies.  Dawn frequently demonstrated the use of peel offs and making 3D butterflies is one of the ideas I still use from her demonstrations.  It was due to Dawn Bibby, and the setting up of her Tiny Teams throughout the country, that our monthly Saturday group was set up.  Without her I wouldn't have met this lovely group of crafting friends who, as well as being a source of inspiration, have been there when life hasn't been running too smoothly.

Also on this card is a pricked border strip made using an Ornare stencil.  Along with stamping, paper pricking and spirelli were the first techniques I tried.

There are also two other techniques on this card which I like using and that is stitching and die cutting with Spellbinders dies. 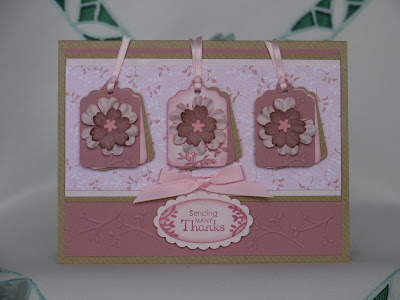 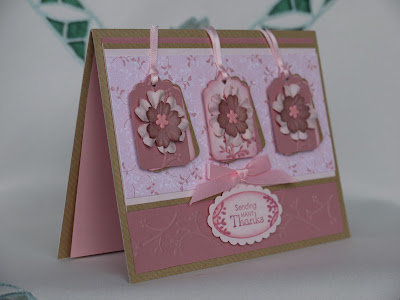 This card represents the first die cutting tool I bought which was the original blue Quickutz.  I upgraded to a Quickutz Squeeze and every card I make has a set of tags, like the ones on the front of this card, with contact details attached to it.  I've also added the Big Shot and the Grand Calibur to my die cutting machines and wouldn't like to be without either of them.

The bottom edge of the card is embossed using an embossing folder.  I loved embossing on cards from the beginning with the use of the light box and stencils or the Fiskars texture plates and embossing systems but when the Cuttlebug A6 folders appeared they made this process so much easier and faster.  Now we have the luxury of so many different sizes of folders and themes to choose from. 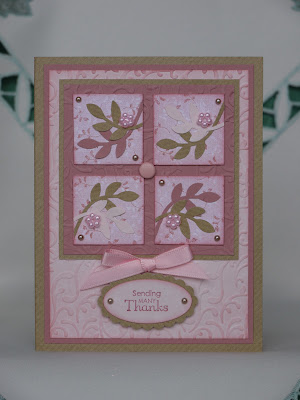 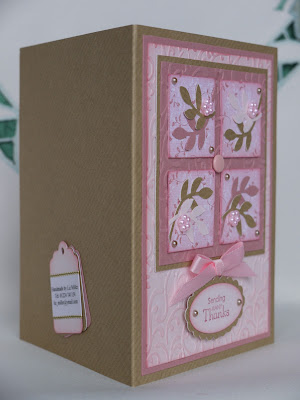 When I make a card there is usually a theme and colour scheme I have in mind and before starting to put anything together I look for crafting items which follow these themes.  For this set of cards it was the leaf sprigs on the patterned paper and shades of pink which were the themes and from there I picked out an A6 and a border embossing folder, the Stampin' up build an owl paper punch which includes a branch, a Hero Arts rubber stamp, an Ornare pricking stencil and various embellishments, card, ink and ribbon in shades of pink.  Some of them were used to put this card together. 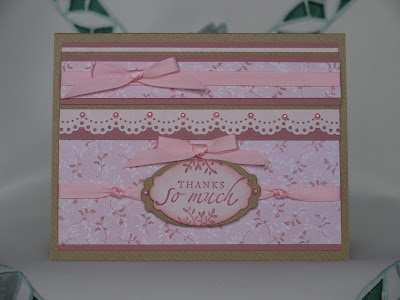 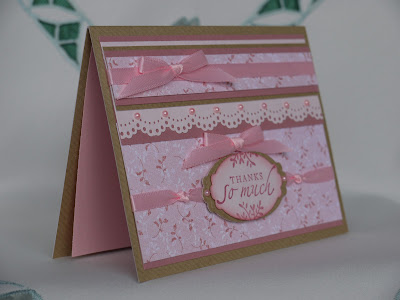 The card above carries on the themes and uses ribbon and pearls, my favourite embellishments, in abundance.  Most cards I send out whether they be for male or female have ribbon somewhere on them.

The Hero Arts stamp was used to decorate the edges of the sentiment on this card and ink was sponged all around to soften the outside edge.  This is something I frequently do to layers or to the outside edge of the base card.  This has caused amusement amongst my crafting buddies through the years as I use old washing up sponges to do my inking with. 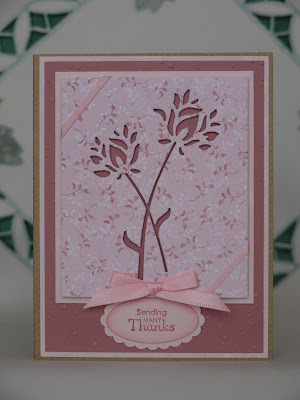 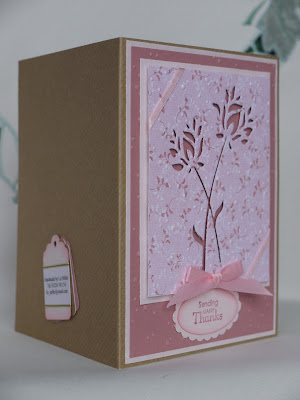 This card represents me out of my comfort zone.  Clean and simple is not a style I do very often but on this one the patterned paper was die cut using a Memory Box die, which leaves a negative image, and then raised on foam pads to give depth behind the the blooms.   The paper and backing layer were also embossed with a random dots embossing folder to add texture. 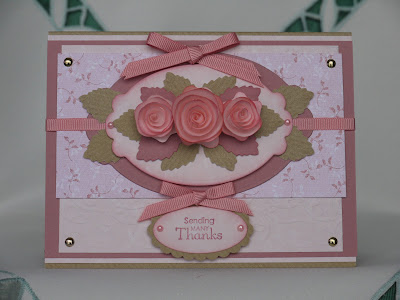 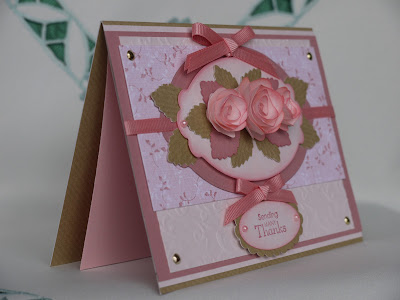 This last card is me back in my comfort zone of layers, ribbon, pearls and my latest addiction of making paper roses.  On all seven cards I've used Stampin' up sentiment stamps and on some of them their punches too.  Stampin' up has been a big influence on my choice of crafting products recently but through the years I've also been inspired by watching demonstrators on Create and Craft, by members of the Cuddly Buddly and Joanna Sheen forums and more recently by reading blogs of crafters worldwide.

I'd like to enter these cards in the following challenge
Make It Monday - Anything Goes
Posted by Liz Miller at 02:04