There were birthday celebrations in the Campbell house on Saturday, as well as the engagement party on the Sunday, as it was their Iain's birthday.  Iain now lives and works in Reading but had travelled north to be home for his birthday and the engagement party.  It had been over two years since I'd last seen Iain so it was lovely to catch up again and especially to meet his lovely girlfriend Rachel. 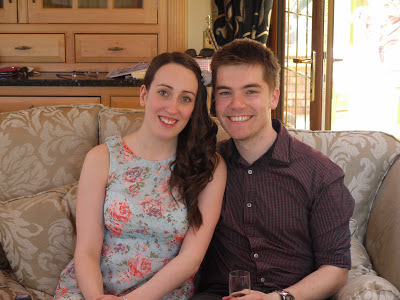 On the Saturday Iain, his brother Niall and their Dad Philip set off to walk along The Gordon Way but got caught in the heavy rain which fell that afternoon.  From the stories we heard all three arrived back with soggy feet from the rain having dripped off their waterproofs and in to their boots.  One member of the group who had some enjoyment from the expedition was Eilidh's dog Rhylee who sourced out all the puddles. Fortunately they all dried off and polished up well for the party the next day.  Philip too works away from home and is shortly to be moving to Paris from Kazakhstan so times when they all come together at home are special and it was lovely to capture the three of them in this photo. 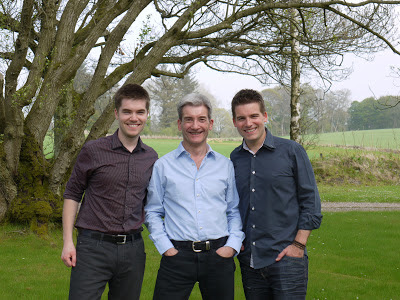 This is the card I made Iain for his birthday.  The post title sums up the card as it was based around these words - Birthday Time. 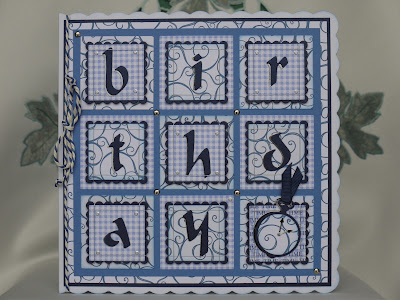 Blue cardstock from the Papeterie and two different patterned paper downloads were used for the layers on this card.  The gingham paper was from the Cuddly Buddly download A Patchwork of Papers Blue and the swirls paper was from Pink Petticoat's Little Swirls download in their Air Force Blue colourway.

The layout involved making layers and toppers of large and small squares.  The three layers of the small letter toppers were cut using Spellbinders plain and scalloped square nestabilities.  Encore blue metallic ink was sponged around the small swirls squares.  After attaching the top two layers together silver metallic thread was wrapped around the corners before they were then mounted on to the backing layer using foam pads.  This added dimension to the card.  Small peel off crystal dots were added to the inside corners of the gingham squares. 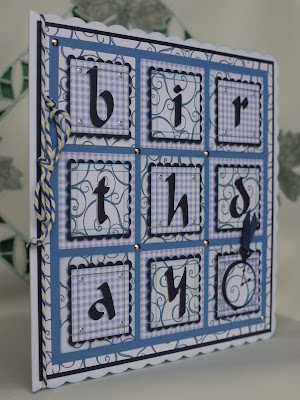 Large lower case Quickutz alphabet dies in indigo font were were used to cut the letters and the little pocket watch was also cut using a Quickutz die.  Blue metallic ink was sponged around the face of the watch and also around the scalloped edges of the base card.  The TIME backing layer behind the pocket watch was created on the computer and printed on to the gingham paper.  A little piece of navy grosgrain ribbon was threaded through the fob. 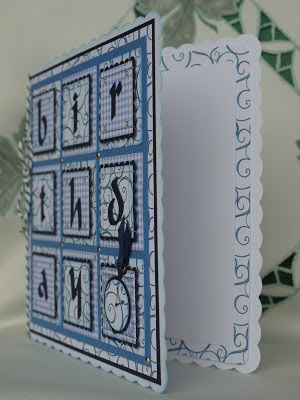 On the inside there was a double layer insert using the Little Swirls patterned paper for the back layer and a message created on the computer for the top layer.  The corners of both were rounded off using a Woodware corner punch.

The final embellishments were silver brads added to the corners of the middle square and two of the outer corners and along with the silver metallic thread and crystal dot peel offs this added a little bit of bling.  Butcher's twine was wrapped around and tied in a bow at the fold of the card.

Of all the photos I took at the engagement party the one below is one of my favourites.  I managed to signal to Iain's Granny to sneak up and sit on his knee so I could capture them together.  Fortunately Iain took it in his stride and this was the end result. 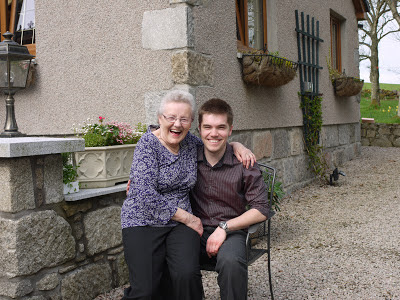 Although this has been another lengthy post I'm hoping that having written a little bit about the recipient, and including some photos, this has made it more interesting too.