Tuesday was also Claire's birthday.  There are several connections between Claire's family and ourselves as her dad and my other half knew each other at university, were bestmen at each others' weddings and now we have daughters, Claire and our Elaine, born just over a week apart.  Claire's grandad used to drive milk tankers and sometimes collected the milk from my dad's dairy farm.  One day he took me on a short trip with him, from our farm to my uncle's farm, and I can still remember the strange sensation there was from the milk moving around in the tank behind us.  A few years later Claire's mum and I were in the same year and knew each other at secondary school.

This is the card I made for Claire's birthday. 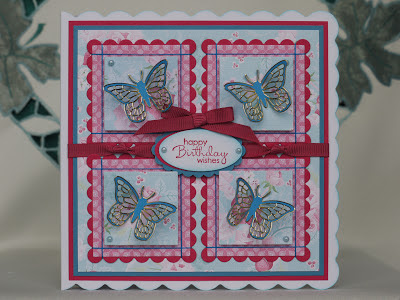 There were lots of bits and pieces of patterned papers left over from making the boxes of roses cards using the Nitwit Collection Romance and Roses and I managed to make this card using some of them.  The layers in the four small square sections were cut using Spellbinders plain and scalloped square nestabilites dies.  After layering the first plain square on top of the scalloped square turquoise thread was wrapped around the corners.  The smallest square was then added on top using foam pads. 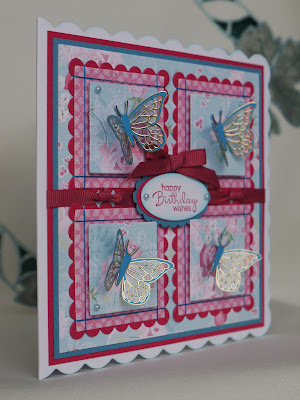 Peel off butterflies were added on top of the smallest plain square.  After being attached to acetate they were cut out and the wings folded back before the bodies were glued on to the toppers using super glue.  I have to admit to carefully measuring out where the butterflies were going to go before I glued them on.

The sentiment in the middle was made using a stamp from the Stampin' up set Petite Pairs and their melon mambo ink.  It was then punched out and layered using their large oval and scalloped oval punches.  VersaMagic chalk ink in the sea breeze colourway was sponged around the edge of the sentiment and on the scalloped edges of the base card. 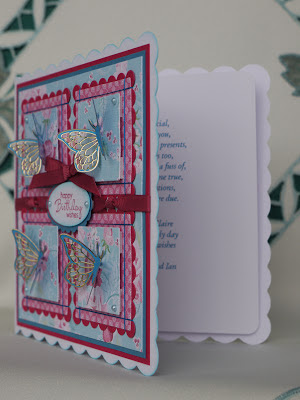 Stampin' up's marina mist and melon mambo cardstock were used along with their rose red grosgrain ribbon.  Only a few self adhesive blue pearls were the other embellishments.

It's a number of years since we last saw Claire but two weeks ago she was a contestant on the television programme The Cube being supported by her boyfriend, mum and dad and a friend.  It was lovely to see what a confident young woman she's become and her prize for the night was £10,000.  A nice little nest egg for a young couple saving for their own home or maybe a wedding as Claire suggested.

Thanks for reading my ramblings today
Liz xx

I'd like to enter this card in the following challenges
Crafty Ribbons Challenge 46 - Anything Goes with Ribbon
Challenges 4 Everybody Challenge 21 - Anything Goes
Gingerloft Challenge - Happy Birthday
Creative Moments Challenge 18 - Lots of Layers
Flutter By Wednesdays Challenge 242 - Flowers (on backing paper), Butterfly and Die Cuts/Punches
Celebrate the Occasion Challenge 114 - Fluttering By
Craft-room Challenge - Use Your Scraps
Ribbon Carousel Challenge 81 - Celebrations
Through the Craftroom Door Challenge - Anything Goes