This is another Pearl Anniversary card I've made recently but this card was an order from a friend and by coincidence the couple who it was for celebrated their anniversary on the same day as Carol and John whose card is in the previous post. 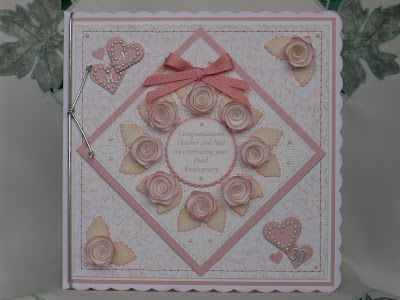 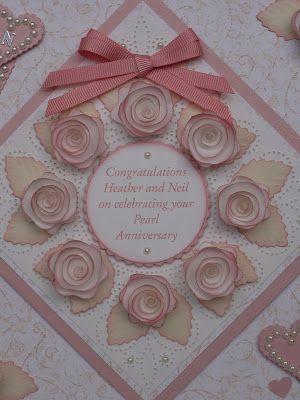 The materials and colour theme for this card is exactly as I used for Carol and John's card.  Once the roses were made I went around the inked edges with a Sakura clear glitter gel pen which gave them a dewy look.  A border of stitching was added to create another frame for the flower topper and silver elastic cord was knotted at the side. 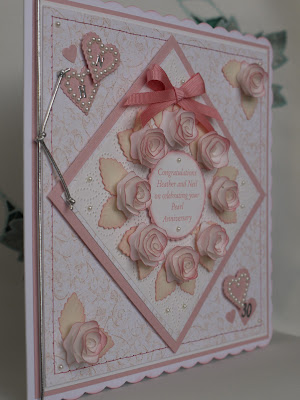 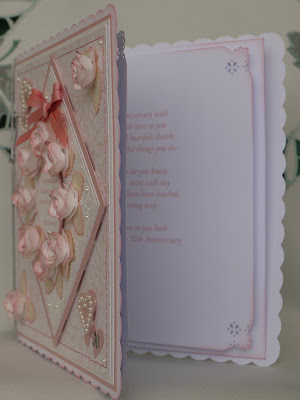 Instead of being a Z fold the scalloped base card was left as it was so that a double insert could be added for family members to write their good wishes.  The corners of the smaller insert were punched using a Martha Stewart corner punch and the edges of both inserts were sponged with VersaMagic pink petunia chalk ink.

It's another cold and wintry day here but I'm off to have some fun at a card class at Carol's this afternoon.  We were to have met last weekend but due to illness Carol had to postpone the class.  She's going to have us make eight cards from a few sheets of A4 card.  Hopefully I won't get the shakes at not being able to add as many layers and embellishments as I normally do.

Hope you have a good weekend and thanks for reading today.
Liz xx