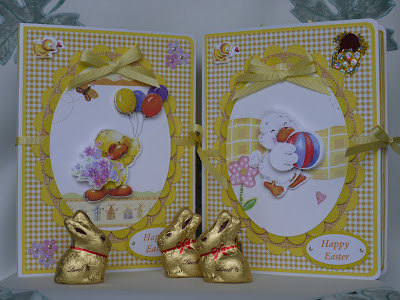 These are two book cards I've made for my nephew and niece for Easter.  The toppers and decoupage for these were taken from a Create and Craft card kit and each book used two identical cards and their decoupage. 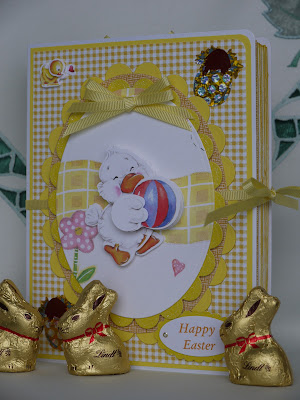 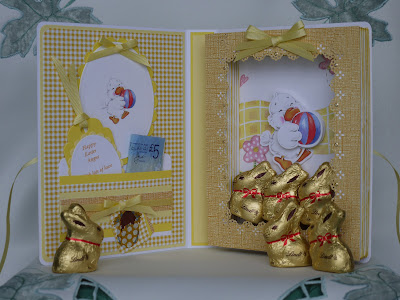 The fronts of the kit cards and decoupage were used to decorate the front of the book card and the framed area on the inside.  On the front the topper and layers were cut using nestabilities and grand nestabilities oval and scalloped oval dies.  The first two layers were raised on foam pads to allow a ribbon to pass through and wrap around the book.  The sentiment on the front was printed from the computer and punched out using Stampin' up's oval and scalloped oval punches. 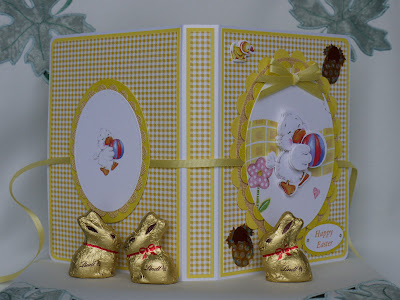 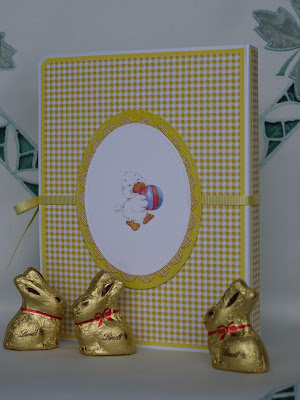 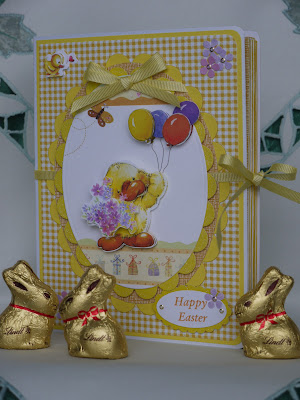 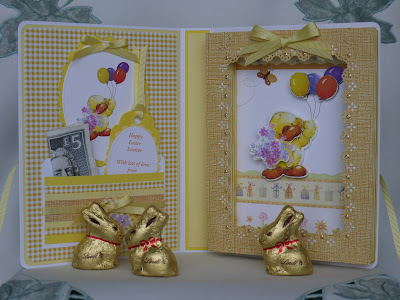 The image from the back of the kit card was also cut and layered to decorate the inside of the front cover and underneath that a little pocket was created using up strips of card left over from decorating the book.  In the pocket is a printed and die cut message attached to a tag cut using a red Sizzix die and there's also some Easter holidays spending money tucked in there too.

It's a year ago since I made my first book card and my inspiration came from a posting on Lisa's blog Wishcraft where she'd made a Mother's Day book card and had supplied the link to where she had found a tutorial to make it. If you follow this link you'll find the measurements and instructions to make the cover and frame for the book card.  The decorated strips around the box frame on this card were punched using a Martha Stewart border punch.

The yellow gingham backing paper was from the Cuddly Buddly download A Patchwork of Papers Yellow and the linen effect card and glitter card were from Create and Craft card packs. 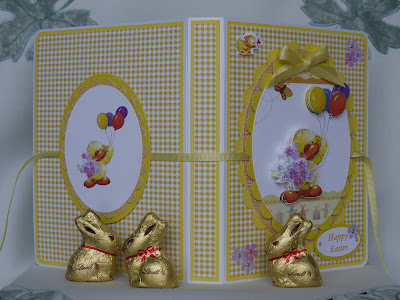 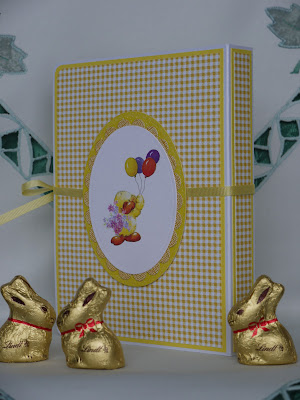 Easter egg stickers, punched flowers made using the Tonic small flower punch and crystal dot peel offs were the little extras added before sending these off in the post.  Hopefully Leanne and Angus will get to enjoy the chocolate bunnies as they had a mystery chocolate eater in their house after Mother's Day.  Their Mum opened a box of chocolates and during the next twenty four hours most of them disappeared.  Nobody owned up but I think Angus gave the game away as he was just a bit too quick to suggest that it must have been the bogeyman.   Let's hope the bogeyman doesn't catch up with Angus.

Thanks for reading today and wishing  you a good Easter weekend.
Liz xx