Not only was there a baby card to make at the beginning of the year there were also two engagement cards to make.  Just before Christmas a nephew proposed to his girlfriend and caught her totally unawares.  Although his home base is in Orkney Olaf works offshore and travels through Aberdeen to get there.  On one of these trips through Aberdeen he bought an engagement ring and then started planning the proposal.  He booked a guided tour of  St Magnus Cathedral and it's tower and it was whilst at the top of the tower looking out over Kirkwall that he proposed.  Here is a lovely photo of the two of them capturing that special moment. 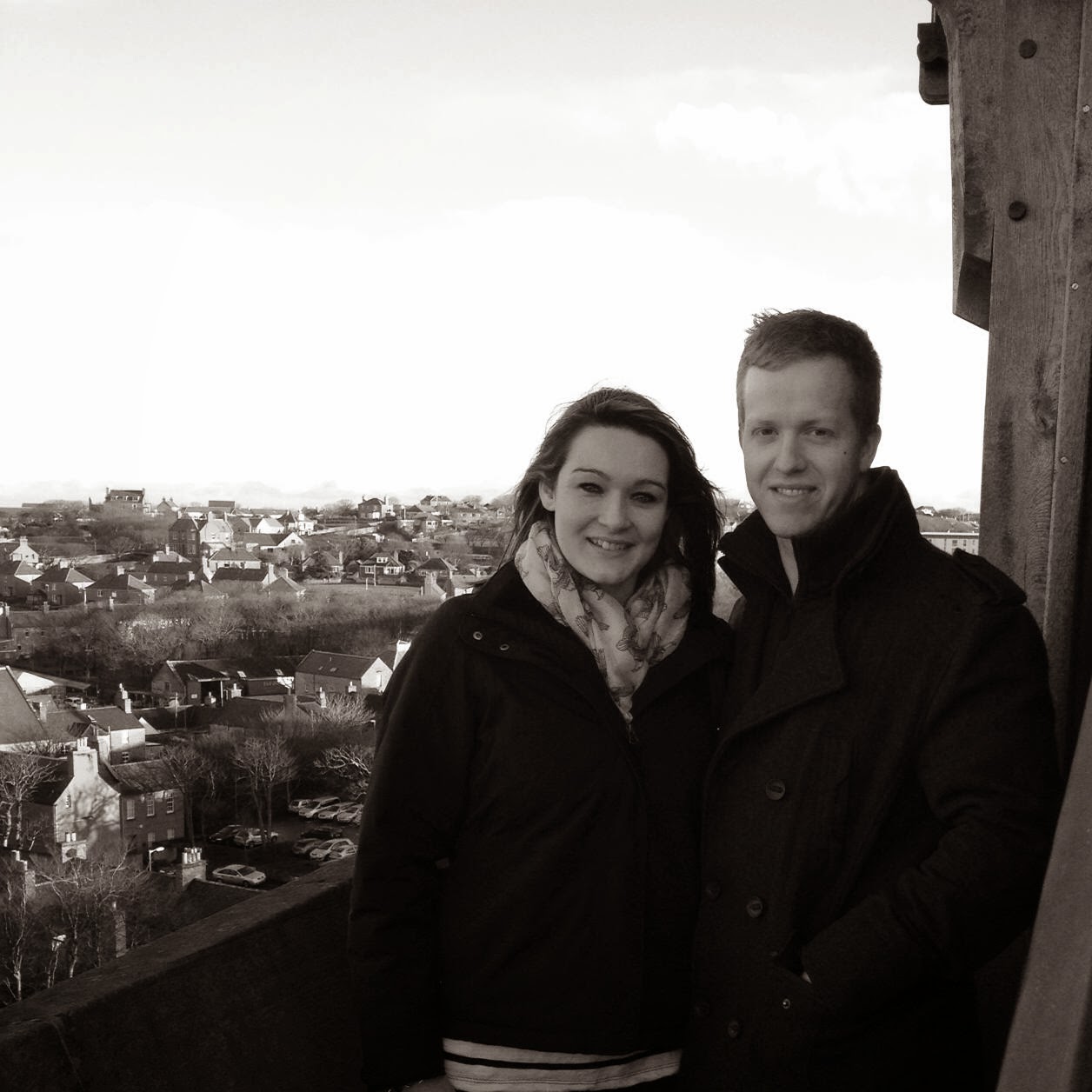 I wanted to use this photo on their engagement card so along with the Nitwit Collection Prints Charming this is the card I made for them. 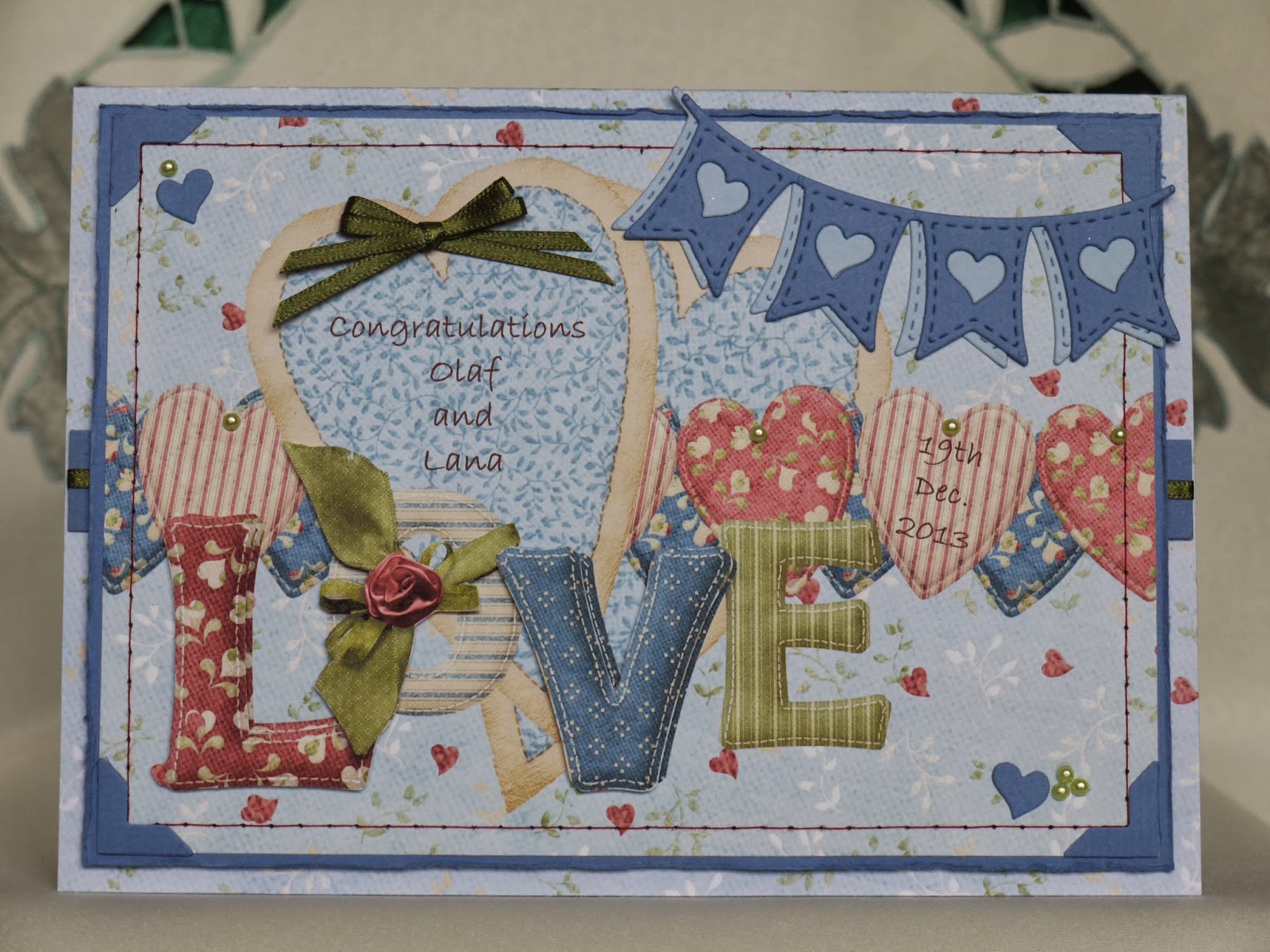 I'm still quite a novice when it comes to creating something digitally but enjoy the challenge of placing, sizing, orientating and then personalising with text.  It never works first time, and there are usually a few print outs before the end result is achieved, but once the base is created and saved it's there for using on another occasion. 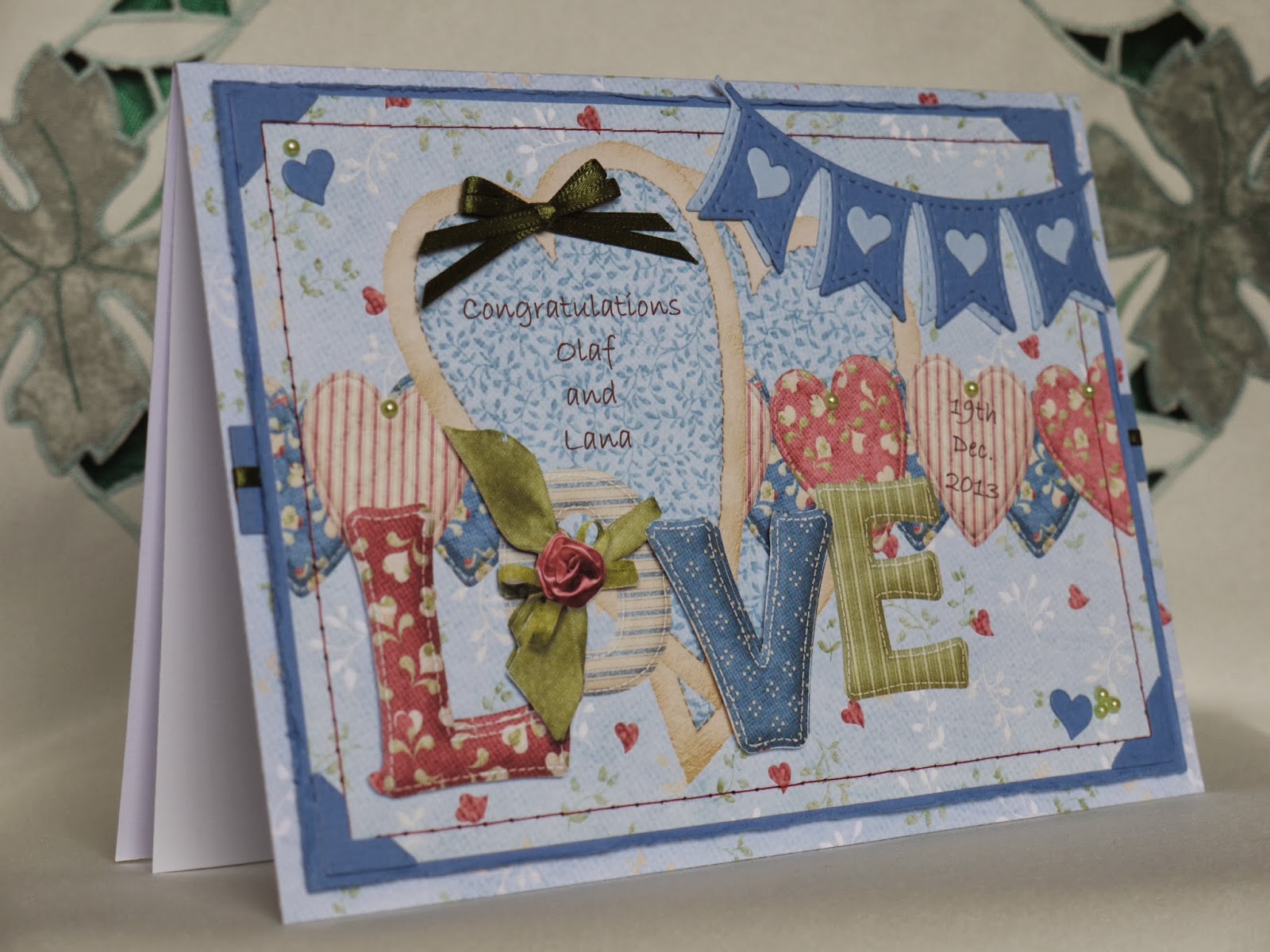 To add depth to the card the front topper was created separately from the card base, backed with blue card and attached using foam pads over a strip of the same blue card wrapped with thin green ribbon.  The element LOVE was printed out again and decoupaged so this added a few layers to the card and to add an extra frame a border was stitched around the topper.  A green ribbon bow, green self adhesive pearls, corners cut using a Quickutz die and a double layered banner cut using a La La Land die were added as embellishments.  Hearts left over from the banner were added to the corners. 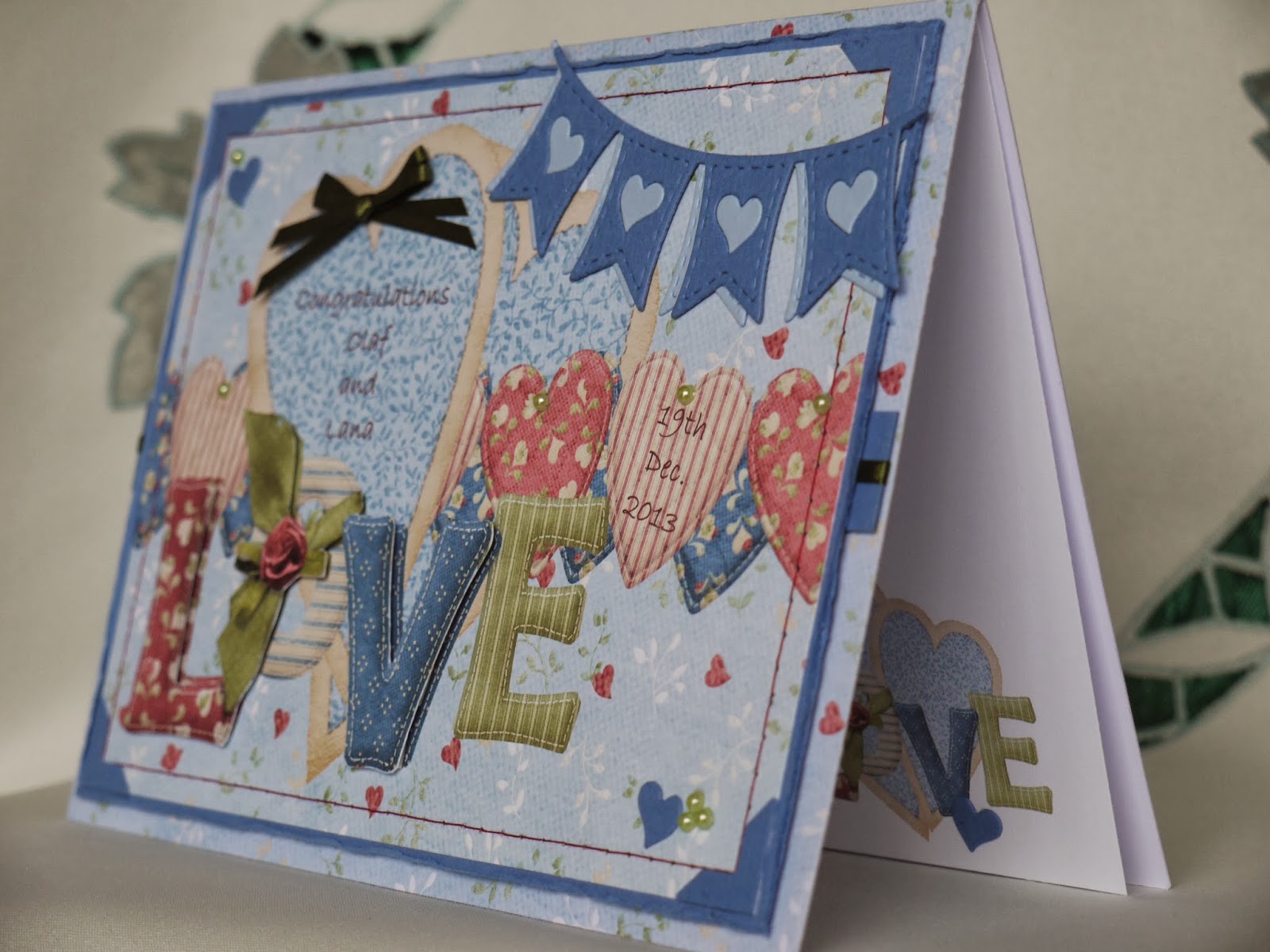 Elements from the Prints Charming collection and  die cut hearts were also used to decorate the insert. 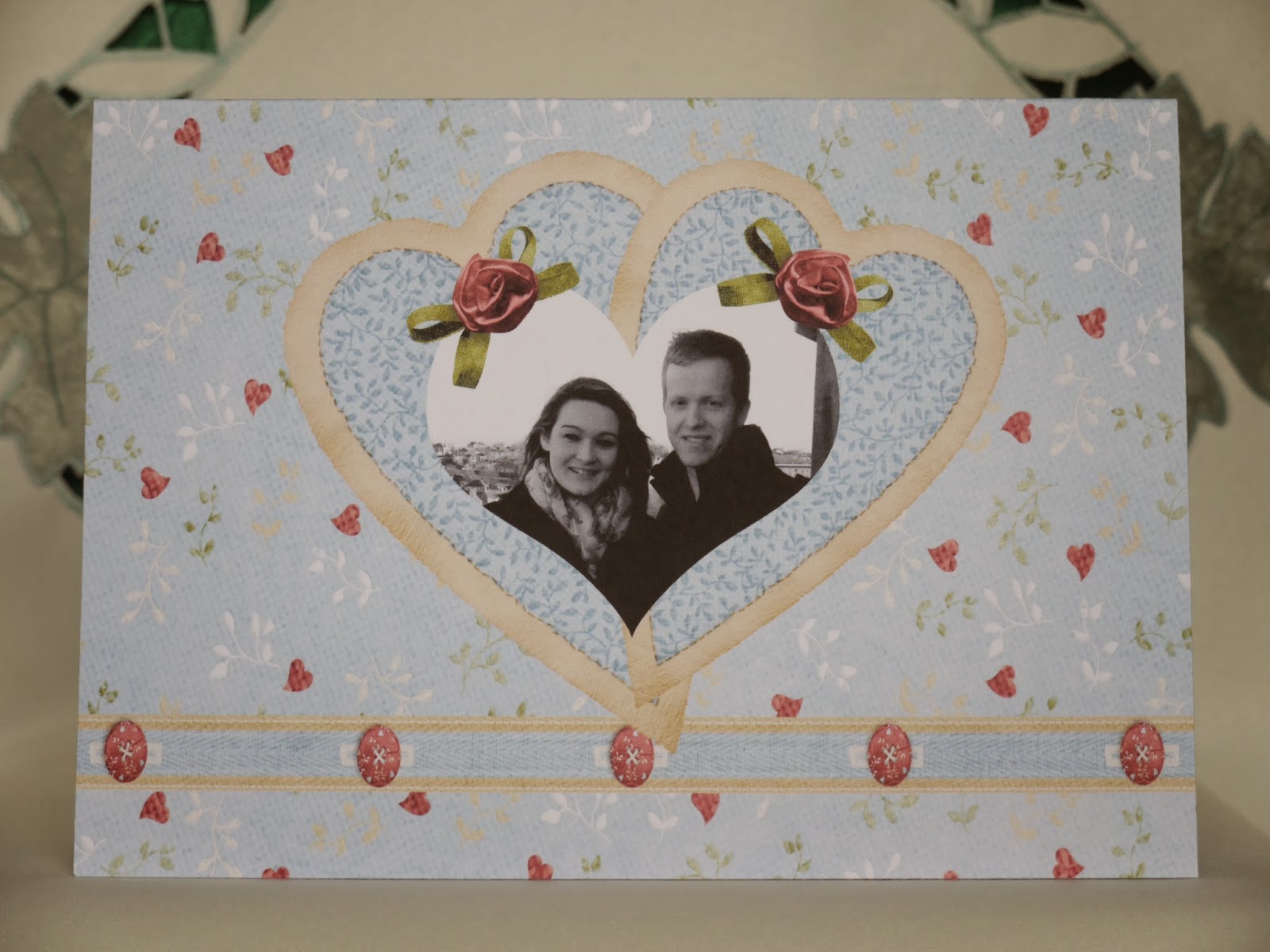 On the reverse of the card I used the photo from their engagement day and the punch feature of My Craft Studio to catch the happy couple in the heart shaped frame.  They are now busy preparing for a wedding on the 1st of November in St Magnus Cathedral where Olaf proposed.

The second engagement card was for the daughter of our best man who got engaged last September but we only found out their happy news when cards were swapped at Christmas.  If you look back to this post you'll find out a little about Claire and the fact that she appeared on the programme The Cube and won £10,000.  During the programme Philip Schofield asked Claire what she might use any winnings for and she mentioned a wedding and when the camera went across to her boyfriend his expression implied that this was news to him.  Unbeknown to everyone he had already started plans to make a surprise proposal which he put in to action on the first of September.  Right up until they reached the airport, supposedly heading off for Florida, Claire had no idea that she was being taken to New York to be proposed to.
For Claire and Mark's card I used the same card base as I used for Olaf and Lana but changed the text to personalise it for them. 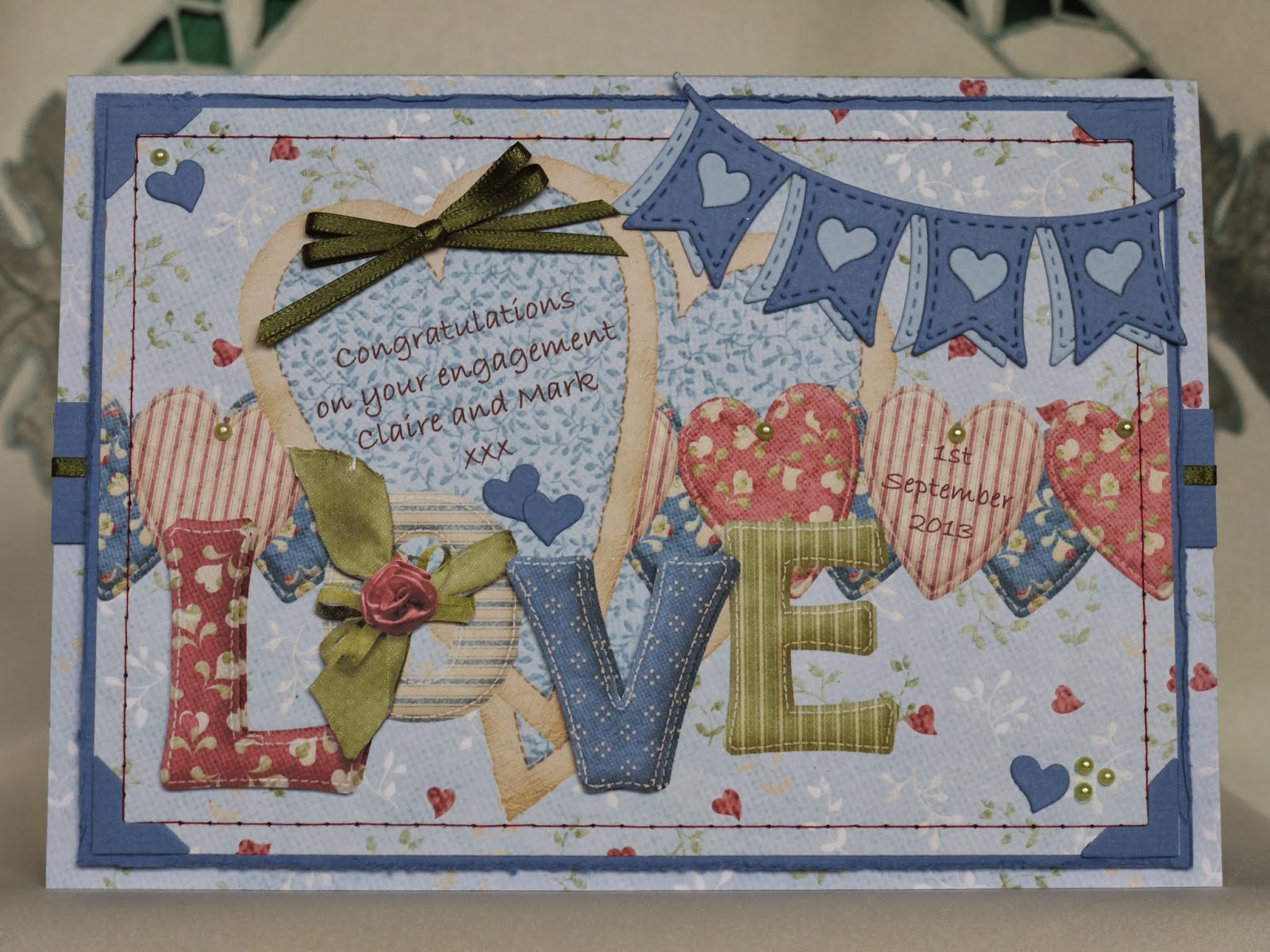 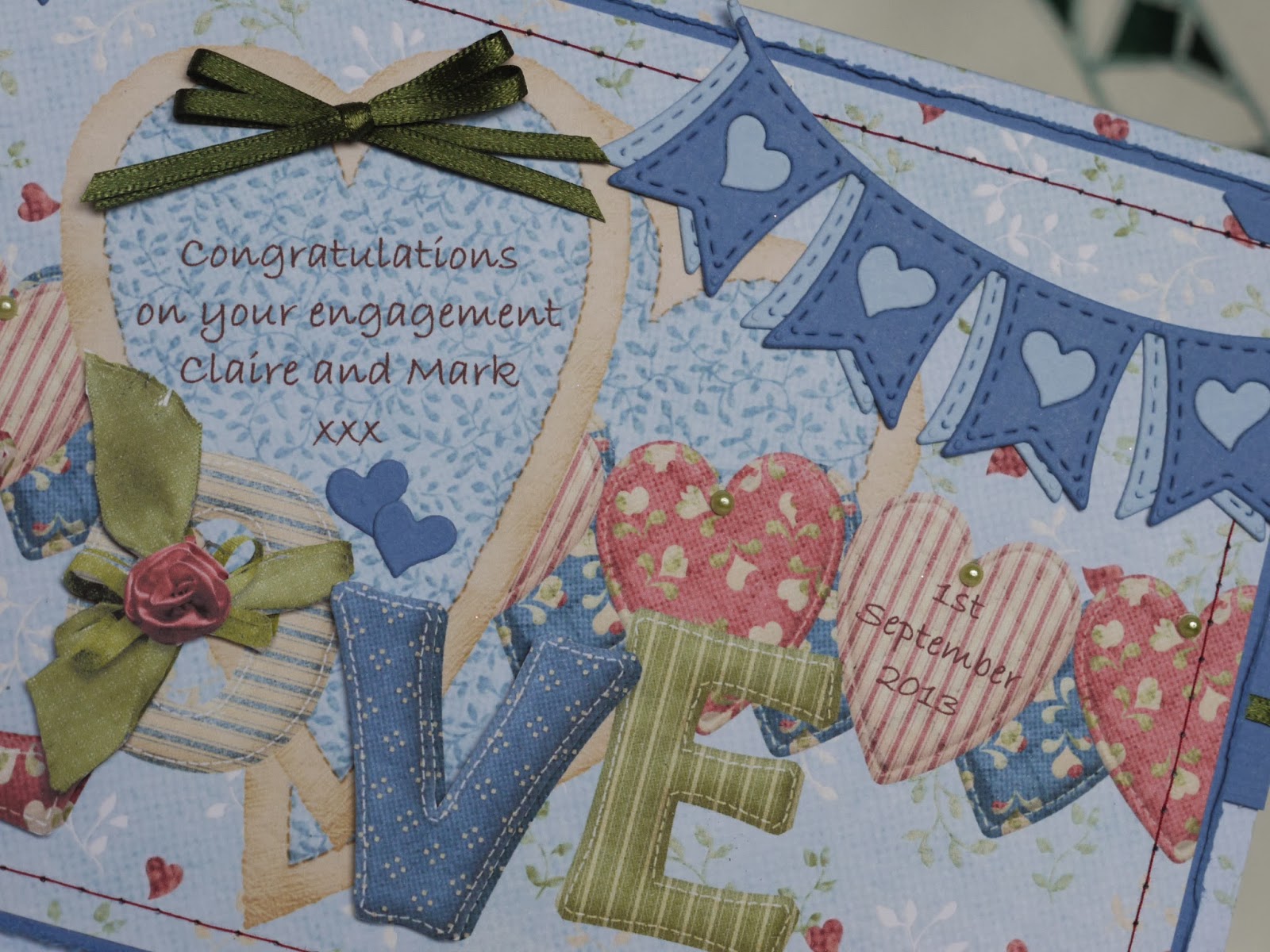 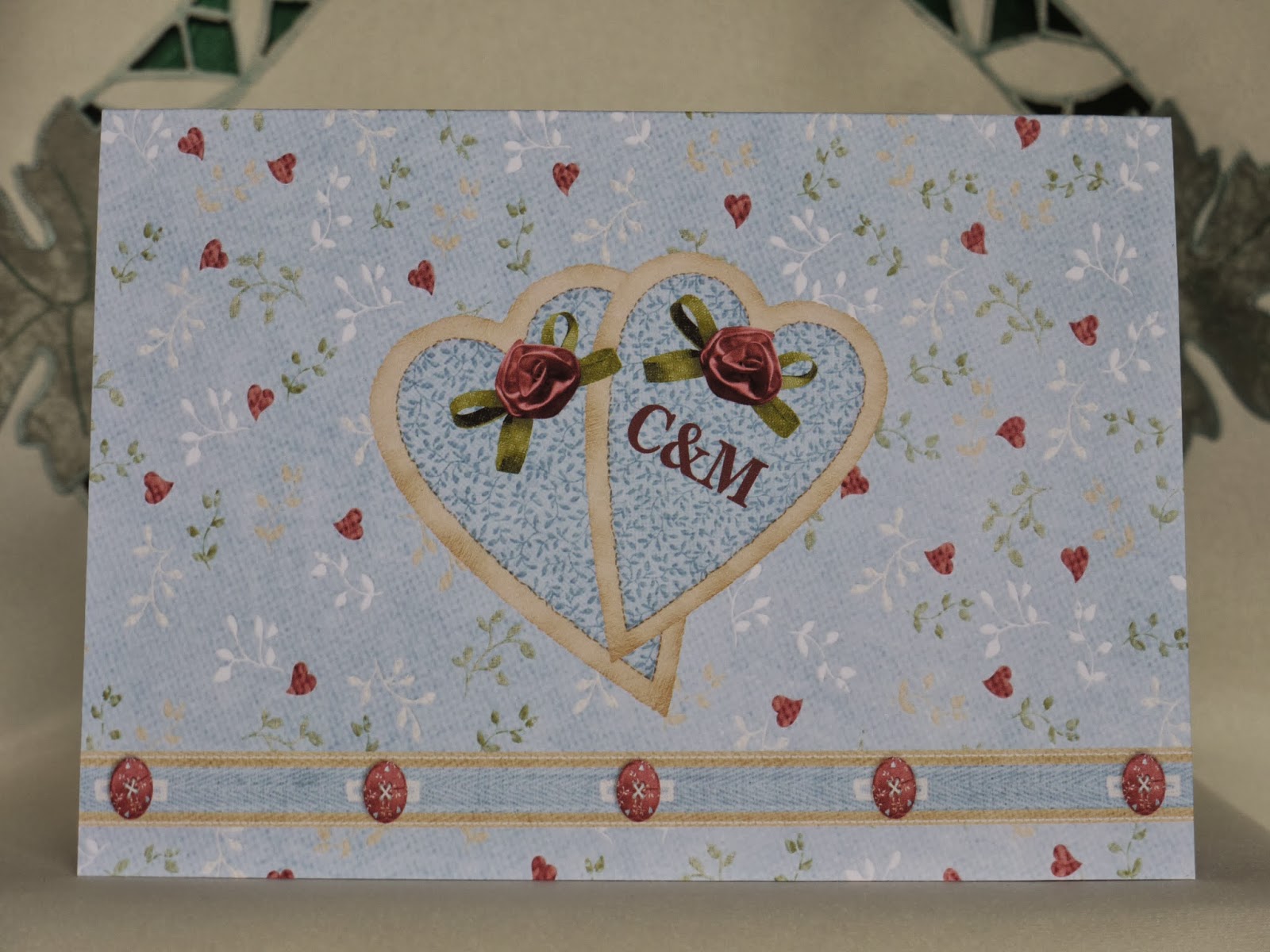 These two lucky girls will have lovely memories of their proposals.  Well done the lads.