It was a brother-in-law's birthday in July and this is the card I made for him.  He used to enjoy sailing so I chose a nautical theme and whilst looking for a nautical title for this posting I came across Blue Monday.

" Blue Monday: The term 'Blue Monday' came into being as early as the 18th century. It originated because of an old custom aboard ships, whereby a man's misdeeds were logged daily and the culprit flogged weekly, on the following Monday. Feeling down or blue is a term used for centuries, far predating the development of Jazz or Soul."

The term feeling blue definitely has nautical origins as I also came across this saying.

"Feeling blue -When a ship’s captain died during a voyage, his ship would return to port flying a blue flag and bearing a blue stripe on its hull. The term “feeling blue” signifies depression or sadness today."

On a happier note here is the card which has a Kanban stamp inked with Versafine Majestic Blue ink as the main topper.  Spellbinders Circle dies were used to create the frame/porthole for the image.  The sentiment is from Stampin' up's Petite Pairs stamp set and was also stamped using Majestic Blue ink and punched and layered using their oval and scalloped oval punches.  Swirls from the main image were also stamped around the edge of the sentiment and Encore Metallic Blue ink was sponged around the edge the edges of the topper and also around the scalloped edges of the base card. 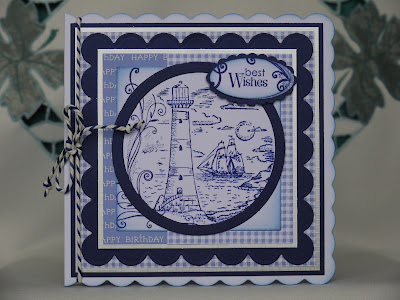 Along with the blue pearlescent card and silver linen embossed card papers from the Cuddly Buddly download A Patchwork of Papers Blue were also used. 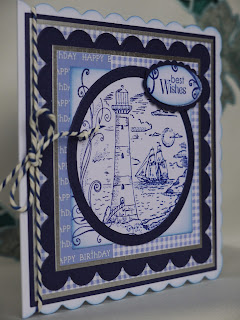 No ribbon on this card but blue and white butcher's twine, to continue the nautical theme, was tied around the fold of the card.

Hopefully very few of you will have woken to feeling blue this Monday morning.
Thanks for reading
Liz xx

I'd like to enter this card in the following challenges
The Squirrel and the Fox Challenge 49 - Nautical/Sea Life
Sweet Stampin' Challenge - Oh I do like to be beside the seaside
Posted by Liz Miller at 02:04