As well as it being my friend's anniversary on the first of July the following day it was her birthday and for this I made a box of roses card to match the anniversary card I'd given her. 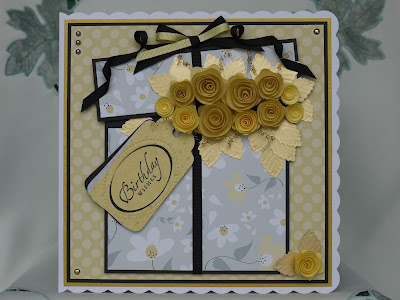 The colour scheme for both cards was based on the Pink Petticoat Isabelline collection of papers.  Matt, pearlescent and metallic gold card along with yellow, grey parchment and black card were used to compliment the patterned papers.  The box sat on an 8"x8" card and was raised up on foam pads.  The parts of the lid which didn't overlap the box were on double layer foam pads.  More dimension was added to the card with the addition of the rolled roses which were made using the Marianne die English rose die.  This can be seen from this side view of the card.  The leaves for the roses were punched from gold linen effect card using an X-cut beech leaf embossing punch. 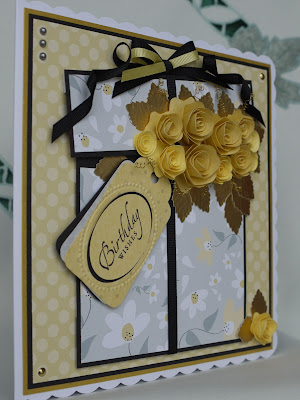 The gift tags were cut using a Sizzix red die and the top tag was embossed using one of Stampin' up's
textured impressions designer frames.  The sentiment inside the frame was made using a stamp from their Sincere Salutations set and punched out and layered using their large oval punch. 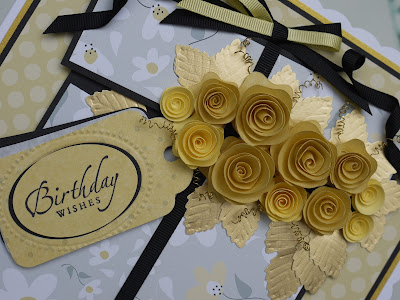 On the inside there was a double insert.  The outer one was plain white and the inner one was made using patterned paper on the left with a small strip of the same patterned paper decorating the edge of the right side.  The verse was created on the computer and printed on to white paper. 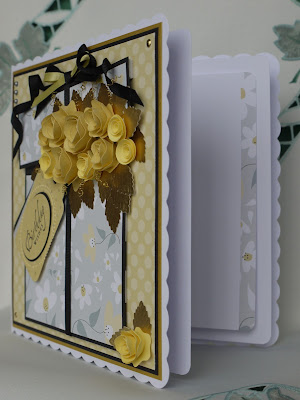 This is a photo of my friend and I taken at a family celebration back in May. 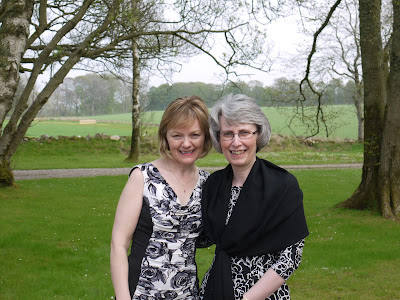