The glorious twelfth was the thirteenth birthday of my niece Leanne and this was the card I made for her.  She spent her birthday on holiday in Inverness with her family and, although the card ended up being a couple of days late, this year I was able to go and deliver it personally. 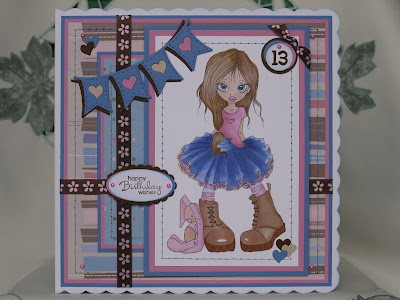 It was the patterned papers which decided the colour scheme for Leanne's card and these were from a Hot off the Press paper pad which came in a QVC kit many moons ago.  The main image is a digital stamp from Saturated Canary called Honey and she was coloured in using Promarker shades to match the papers.  Glitter was added to the heart on her t-shirt and the frills of her petticoat.  To add an extra frame to the image blue thread was used to stitch a border around Honey before she was layered on to blue and pink card.  Two of the backing panels also had stitched borders. 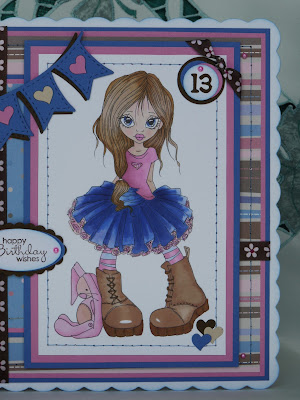 A stamp from Stampin' up's Petite Pairs and their chocolate chip ink was used to create the sentiment and it was then punched and layered using their oval and scalloped oval punches.  Their one inch and three-quarter inch punches were used to make the layers for the number 13 which was die cut using a Quickutz die.  Bashful blue ink was sponged around both and also the scalloped edges of the base card. 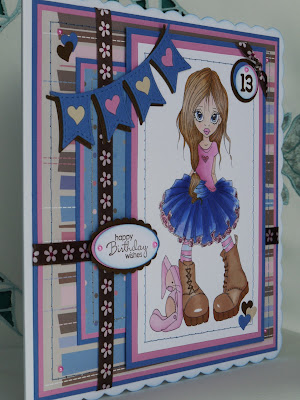 The bunting was made using La La Land's Heart Banner die.  It was cut in four different colours of card and then pieced together to make this banner.  Left over hearts were also added as embellishments.  Pink self adhesive pearls from Hobby House and ribbon from Papermania, which had been a freebie in a craft magazine, were also added to the card.  A mixture of old, new and freebie items came together to make this one. 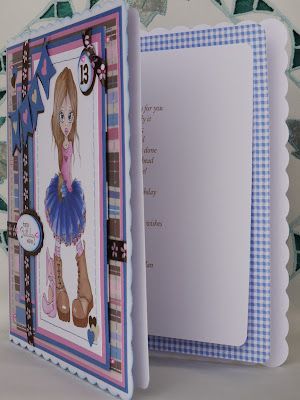 There was a double insert inside the card.  Blue gingham paper from the Cuddly Buddly download A Patchwork of Papers Blue was the outside layer and a verse printed from the computer on to white paper was the inside layer.

Below is a picture of Leanne wearing the 13 badge I had tied to her card. 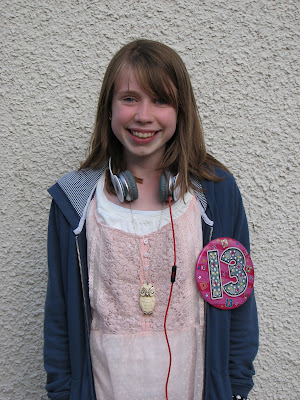 Although we didn't manage to meet up on Leanne's birthday we all had a lovely day out with her family at the Highland Wildlife Park, Kingussie instead.  This is Leanne with one of the safer animals we came across that day. 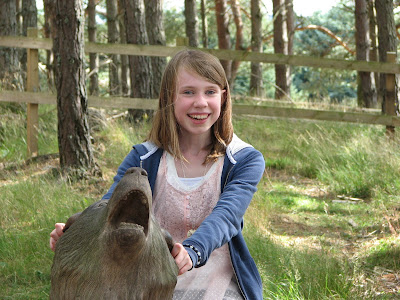 She even created one of her own. 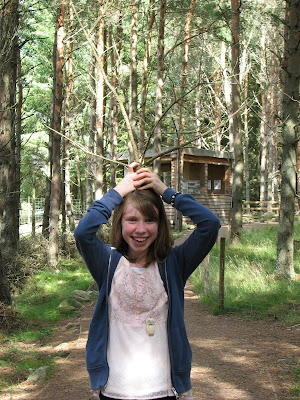