To start this post I need to say thank you to my two newest followers.  Hopefully you'll enjoy future postings or browsing through past ones.

This card was for a friend's son who turned seventeen back in July.  Fraser plays the guitar and is interested in music so I used this as the theme for a HB2U rock star birthday card.  Three different sheets from the DCWV Rock Star Paperstack were used as the backing layers along with black and white card and holographic and linen effect silver cardstock.

On the bottom layer the stamp You Rock from the Inkadinkado clear stamp set Rock Star was stamped with VersaMark ink and embossed using Stampendous silver detail embossing powder.  Silver metallic thread was used to stitch a border around the layer and corners cut using a Quickutz die were layered up on two of the corners.  Little silver peel off stars were added around the stamped sentiment.

The middle layer had a star theme taken from the silver foiled backing sheet.  Stars were cut and layered using a red Sizzix die and a Quickutz framed star die.  A star embossing folder was used to emboss stars cut from the linen effect silver cardstock and silver star brads were attached to each corner of the layer.  The same dies were also used to cut stars to add to the top right corner of the bottom layer .

The top layer was the HB2U topper made using a silver foiled skulls backing sheet.  The corners were punched using a Woodware corner punch and silver metallic thread was wrapped around the topper.  The HB2U sign was made using Sizzix sizzlits dies.  The letters were cut twice and layered to give a shadowed effect and the negative from the die cut was used for the 2. 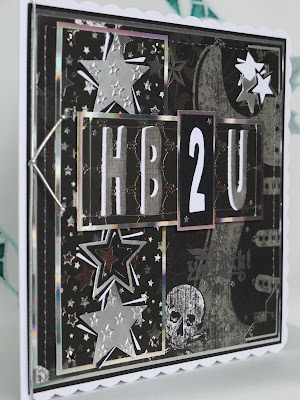 To finish off a silver elastic cord was tied around the fold of the card.