My friend and her husband celebrated their anniversary on the first of July and this is the card I made for them.  Their anniversary treat was a trip to London to see Michael Buble perform at the O2. 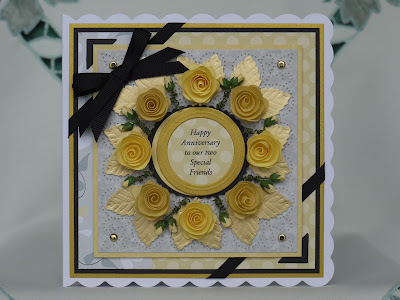 The colour scheme for this one was based on the Pink Petticoat Isabelline collection of papers.  Matt, pearlescent and metallic gold card along with yellow, grey parchment and black card were used to compliment the patterned papers.

The card was made in two tiers.  The top tier had matt gold card as it's base and on top of this was a layer of grey parchment card which had been paper pricked using an Ornare stencil.  Using the pricked design as a guide, leaves punched from gold linen cardstock were glued on in pairs.  Attached at the base of each pair of leaves were yellow and matt gold rolled roses which had been made using the Marianne English Rose die.  Little paper rosebuds were glued in between the paper roses. 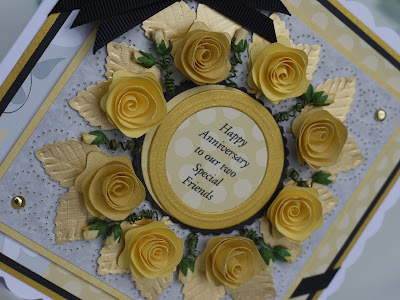 The sentiment was created on the computer and printed on to patterned paper and then framed and layered using Spellbinders plain and scalloped circle dies. This was then attached to the centre of the topper using foam pads to raise it up.  Foam pads were also used to attach the top tier to the bottom.

The bottom tier had layers of gold pearlescent card, black card and the patterned papers.  Small black corners cut using a Quickutz die were added to two of the corners.  The usual embellishment of ribbon along with gold brads were also added. 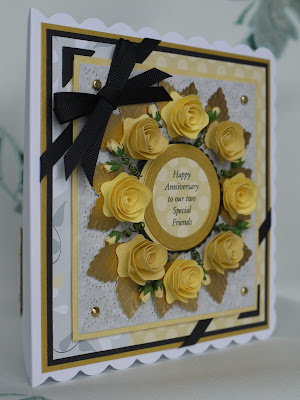 Below is a photo of my friend and her husband which was taken at their son's engagement party in May.  Hopefully she won't see this or it could be the end of good friendship.  Although they say the camera never lies we've both reached the stage where we don't like what it's telling us. 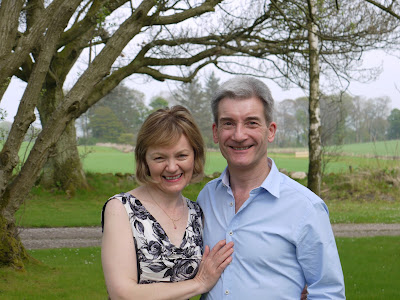 Thanks for reading today
Liz xx
Posted by Liz Miller at 00:30