This is the card I made for Niall and Steph whose engagement and surprise party I wrote about in the previous post "Amour à Paris.......part 1".


The theme for the card was based around the proposal at the top of the Eiffel Tower.  Whilst at the Papeterie last Saturday I was lucky enough to find two sheets of Kanban card from the Lavender Rose Collection called "From Paris with Love" and they then dictated the colour scheme. 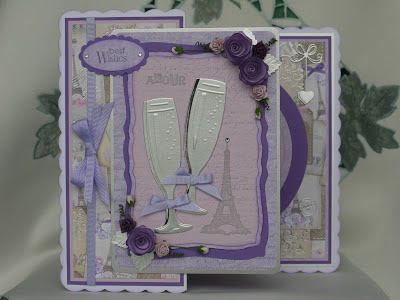 This was an ideal opportunity to use the large Stampin' up French Script stamp to create backgrounds on two of the layers of the topper.  On the lavender layer it was stamped using Encore silver metallic ink and on the top layer the stamp was lightly inked with purple metallic ink to leave a faded impression.  Over the top of this the Eiffel Tower and Amour stamps from Stampin' up's Artistic Etchings set were stamped using silver metallic ink.  This isn't a set I own but I knew a friend who did, thank you Carol.  A little gem was added to the top of the Tower to symbolise where the proposal took place. The sentiment was also a Stampin' up stamp from the Petite Pairs set and it was punched out and layered using their oval and scalloped oval punches.

Spellbinders Curved Rectangle dies were used to cut out two of the layers of the topper with a faux layer added in between.  The faux layer was made by using the smallest die as a stencil to draw around before cutting it out by hand.  The edges were distressed and inked to disguise any uneven cutting.

The champagne flutes were cut using a Marianne die and were double layered using shiny and matt silver card and in the corners the Marianne die English Rose was used to cut the large rolled roses which are my crafting addiction at the moment.  Behind the roses are silver leaves punched using an X-cut embossing punch. 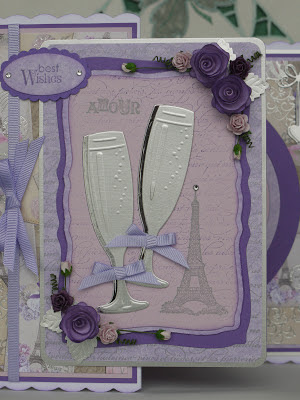 Layers of silver, purple, lilac and lavender card along with the patterned card from Kanban were used to decorate the panels of the z-fold card.  The picture below is of the back of the card.  The lilac card was embossed using the Regency Swirls Embossalicious folder and the Memory Box Precious Hearts die was used to cut the heart embellishments which were also double layered.  Peel offs were used to add Steph and Niall's initials to the small hearts and the date of their engagement to the large heart. 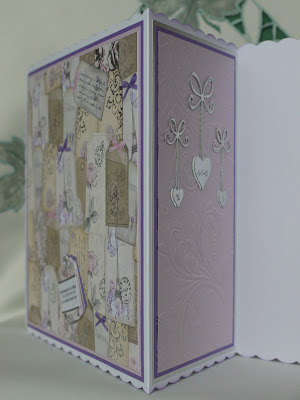 On the inside of the card messages were created on the computer and die cut using Spellbinders heart nestabilites dies and their grand nestabilities circle dies.  More of the heart embellishments were added too.  You can see from the pictures below how appropriate the Kanban card was to the occasion. 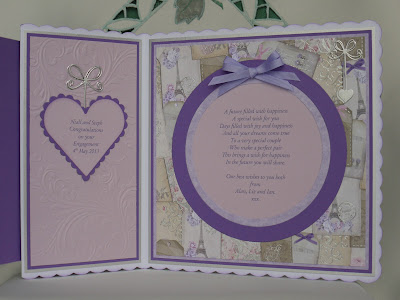 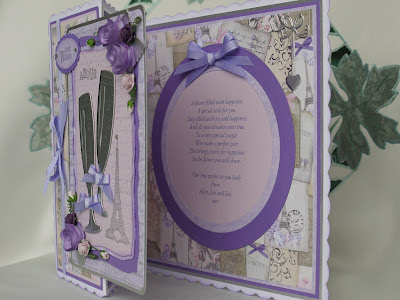 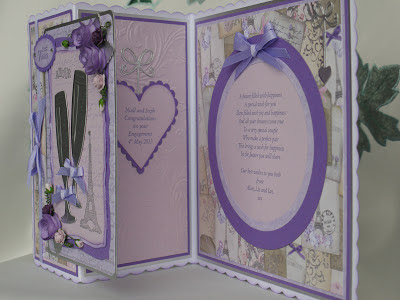 There was even enough card left to decorate the lid of the box. 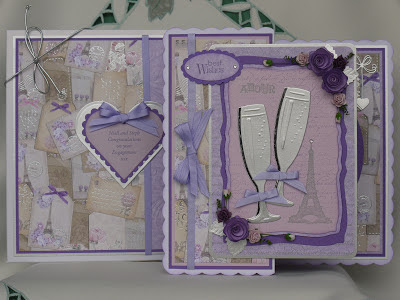 The only other additions to the card were small paper roses and rosebuds in contrasting colours, a few more sparkly gems and lots of bows and ribbons to match the backing card not that I ever need an excuse to use ribbon.

It was lovely to be able to create a personalised card for Niall and Steph and hopefully it will be a reminder of their romantic weekend in Paris.

I'd like to enter this card in the following challenges
The Ribbon Girl May Colour Challenge - Lilac and Lavender
Marianne Design Diva's Monthly Challenge - Get Your Dies Out
Craft-Dee Bowz May Challenge - Anything Goes With Hand Made Bows
Crafty Boots Challenge - Celebrations
Crafty Bloggers Network Challenge - O's and X's Challenge (Ribbon/Stamps/Gems)
Simon Says Stamp Challenge - Use your favourite ink - Encore purple metallic ink which was used to stamp the French script background, the sentiment, and was sponged around the scalloped edges of the base card the edges of the curved rectangles and the rolled roses on the topper and also the heart in the inside.
Challenges 4 Everybody Challenge 20 - Anything Goes
Stamping Sensations May Challenge - Embossing and Texture
Emerald Faerie Challenge 43 - Ribbons
Delightful Challenges - Bingo (Patterned Paper/Punches or Dies/Flowers)
Fab'n'Funky Challenge 171 - Your Favourite Embellishment ( Rolled roses made using the Marianne English Rose die)
The Ribbon Carousel Monthly Challenge 81 - Celebrations
My Craft Spot Challenge 98 - Ribbon and Twine
LEJ Designs Challenge 54 - Die Cuts and/or Punches
Make It Monday - Anything Goes
Posted by Liz Miller at 00:22