Saturday was a busy time for birthday's amongst family and friends. Ian's friend Ben, who moved away to Blackpool four years ago, celebrated his twenty-first and this is the card I made for him. 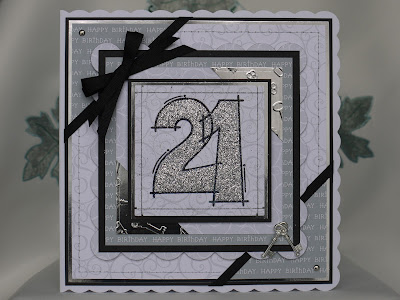 The previous Saturday I'd been to see Nicky Hall demonstrating at the Papeterie and whilst there bought a 21 stamp set by Woodware.  The 21 was stamped on to the positive silver Little Swirls paper from Pink Petticoat using VersaMark ink and embossed using disco black embossing powder from Stampendous.  Once this had set then the twenty one was die cut using a square Spellbinders die and the inside of the numbers were filled with art glitter glue and silver glitter.  It's ages since I've used this technique and I used to love watching Jane Nestorenko demonstrating it on Create and Craft.  A Woodware corner notch punch was used on each corner and a silver and black metallic thread wrapped around the topper.  A few stray flecks of embossing powder had escaped and to camouflage this I spritzed over the topper with black and silver metallic pens. 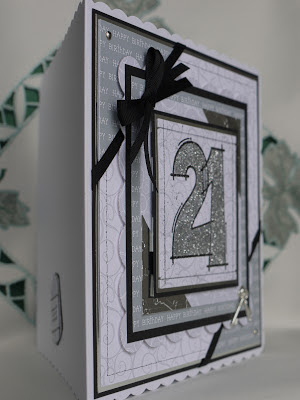 The card was put together in three tiers.  On the bottom one there are layers of black and silver mirri card and the positive silver Little Swirls patterned paper.  The corners of the patterned paper were either stitched or had corners added on top made from Happy Birthday paper printed from the Cuddly Buddly download A Patchwork of Papers Blue in greyscale.

The 21 topper layered on to black and silver mirri card was the third layer.  My usual embellishments of ribbon and brads were used with the addition of two silver keys. 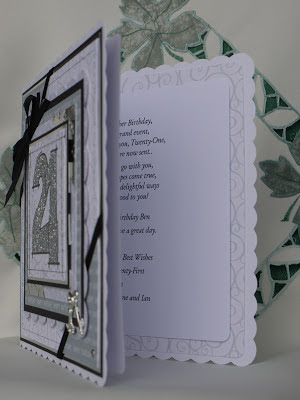 A double insert was made for the inside of the card using Little Swirls patterned paper for one layer and a message created on the computer for the second. 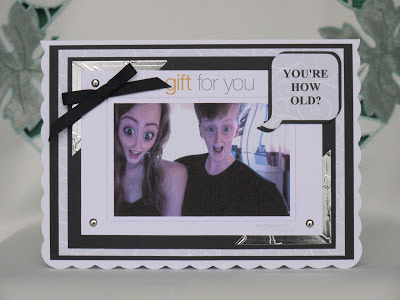 We gave Ben a voucher to spend on Amazon and used their print a gift card with your own photo option.  After printing it out I chopped it up and made my own gift card with it.  The photo used is one Ben posted on his Facebook page recently of himself and his girlfriend Abbey.  The photo had already been manipulated and I thought using it would amuse them both.  The caption was printed on the computer and die cut using an X-cut speech bubble die.

The card and gift card 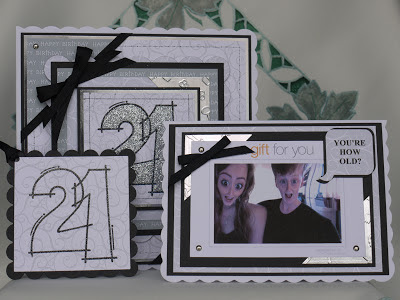 Ben on his birthday with Abbey 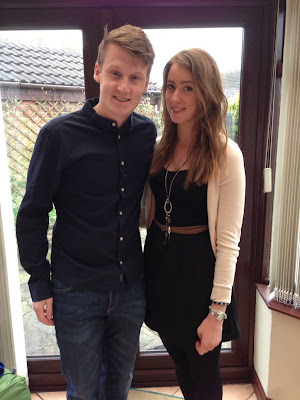 Ben made my day on Saturday as he took time out from his birthday activities to phone from Blackpool to say thank you for his card and present.  That made the time and effort taken all the more worthwhile.