As well as making a card for a new teenager last week there was also an eighteenth birthday card to make as a grand-nephew reached this milestone. 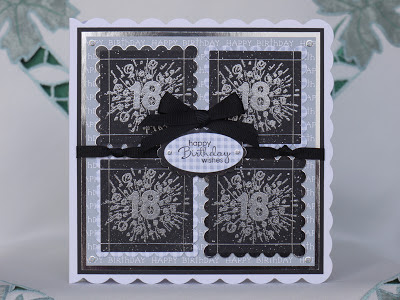 Unfortunately Ryan's card was a last minute effort so it turned out to be a simple one based around his coming of age.  With a colour scheme of black, grey and silver and the layout of four square toppers on to a 6x6 scalloped square card blank I set to work.  This layout can be adapted to lots of different themes and with the use of the Spellbinder dies the toppers can be made in no time.

On these toppers an 18 shower burst stamp from Personal Impressions was stamped and embossed using VersaMark ink and silver detail embossing powder from Stampendous.  The black card used had a fluffy texture to it and captured embossing powder where it shouldn't have so to camouflage this silver metallic ink was spritzed over the image.  Silver mirri-card and gingham backing paper were used as the backing layers for the toppers and silver metallic thread wrapped around the corners. 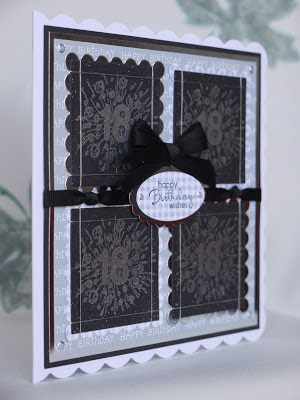 The Happy Birthday and gingham papers were both printed in greyscale from the Cuddly Buddly download A Patchwork of Papers Blue.

On the family farm Ryan has recently been rearing ducks and selling their eggs.  Here's a photo he posted of his newest brood.