It was a busy day in our house yesterday as it was the designated tablet (fudge) making day for the wedding table favours.  The only stirring I did was to suggest that it was fudge they were making, rather than tablet, but after a google definition search I was informed it was tablet.  I'm still not convinced though.   Firstly the boxes were all folded and Andy was given the task of attaching the bows.  Here's a picture Elaine took of them all laid out and ready to be filled. 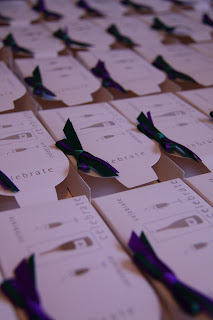 Elaine took on the task of stirring the tablet during the boiling stage.  Here she is in action stirring the third and final batch whilst the second is cooling on the trays and the first had already been packed up in the little boxes.  Feet and wrists were beginning to ache by this stage. 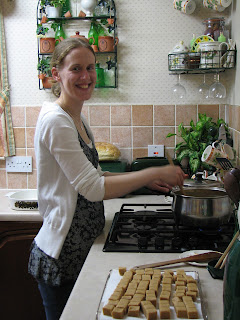 The ATC bags were a perfect size to hold six pieces and fit in the favour boxes.  It was here that I did try to give some advice and suggested that the self seal fold over flap should go underneath the tablet so that it looked more pleasing when it came out of the box.  I was reminded that I had shopping to do at Tesco so I resigned myself to being the chief taster and refreshment provider for the day.
It was at the beating stage that Andy was called in again as the more the mixure is beaten the thicker it becomes.  It ended up being a joint effort as Elaine scraped down the sides of the pot, where it had already begun to set, whilst Andy whipped it into shape.  Here's some pictures of them in action.  Sorry about the blurry hands but it captures the action of the moment. 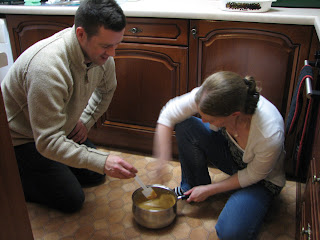 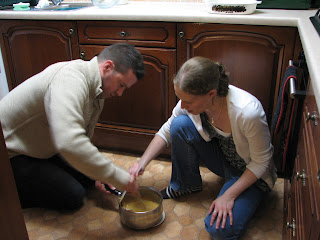 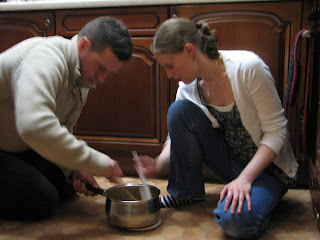 It was a successful day though as they got it all finished and packed, ready to take with them next weekend.  Plenty of sweat but no blood or tears thankfully.  Wonder how their arms are feeling today.
The final product 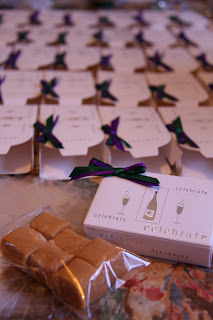 I'd like to enter this post in
Make It Monday - Anything Goes
Thanks for reading
Liz x
Posted by Liz Miller at 02:24