Another one reaches Twenty-one

Last month saw another of Ian's friends reach twenty-one so I went back to the Woodware 21 stamp to make this card for him. 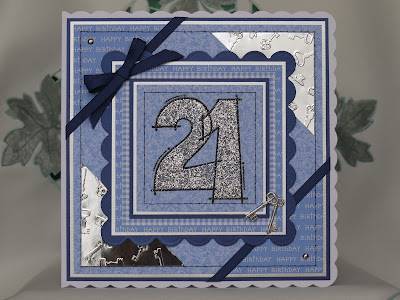 The twenty-one topper on the front of the card was made using this stamp and the patterned papers are all from the Cuddly Buddly download A Patchwork of Papers Blue.  The 21 stamp was inked using VersaMark ink and then embossed using disco black embossing powder from Stampendous.  Once this had set the twenty one was die cut using a square Spellbinders die and the inside of the numbers were filled with art glitter glue and silver glitter. A stitched border was added around the twenty-one to frame it. 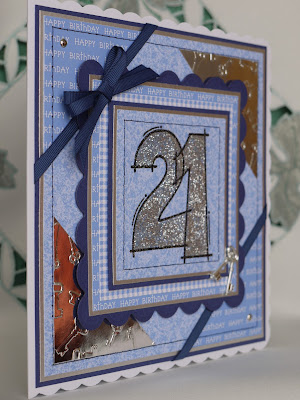 The card was put together in three tiers.  On the bottom one there are layers of blue pearlescent card and silver embossed card and a blue patterned paper.  After adding corners made from the Happy Birthday paper a stitched border was added around the top layer.  Inside the stitched border silver mirri-card corners embossed with a Darice keys embossing folder were added.  Stampin' up's Night of Navy grosgrain ribbon was wrapped around two of the corners and a bow added to the second tier
The second tier has a scalloped square cut from blue pearlescent card paper. Layered on top of this is silver embossed card, Happy Birthday paper and blue gingham patterned paper.
The 21 topper also layered on to the blue pearlescent card was the third layer.  The usual embellishments of ribbon and brads were used with the addition of two silver keys. 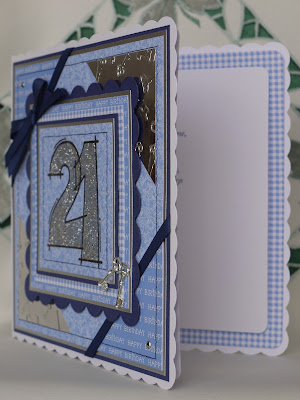 A double insert was made for the inside of the card using the blue gingham patterned paper for one layer and a message created on the computer for the second.


Adam and Ian were in the same class at Primary School and, although their lives have gone down very different routes since then, they are still good friends and have recently started playing chess regularly.  Adam received a lovely set for his twenty-first which he now brings around for them to play on.  You know when Adam is in the house as there is usually singing or whistling to be heard.  He and his two brothers, along with one other member, formed a folk band called The Sylver Bridal which you can listen to by clicking on the link.  Below is a picture of Adam, on the right, and his brother Ryan in action. 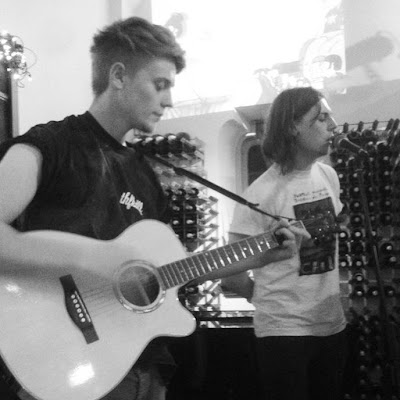