Box of Roses for another Crafting Buddy.

As well as it being Norma's birthday last month it was also Wilma's birthday.  Wilma is a crafting buddy in Carol's Tuesday crafting group and as she is a trained florist I couldn't resist making the box of roses for her too.  Wilma is making up the bouquets for Carol's daughter's wedding next Saturday and has already made Carol's corsage. 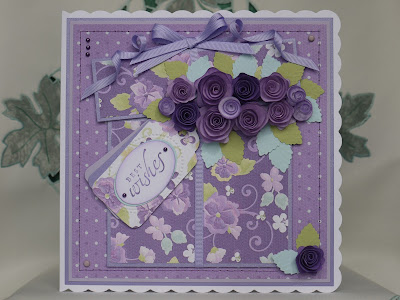 This time the Marianne English Rose die was used to cut flowers from pale lilac parchment card and purple card.  After being rolled the pale ones were sponged with Encore purple metallic ink.  The leaves were punched from aqua card and certainly celery card from Stampin' up using an X-cut embossing punch. To add an extra frame a stitched border was added to the backing layer. 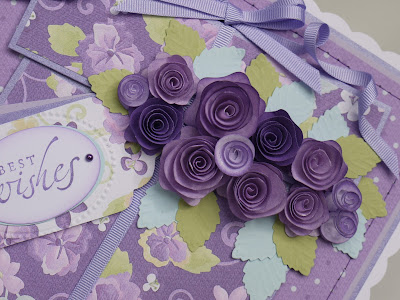 An original Sizzix red die was used to cut the gift tags for the box and the top tag was embossed using one of Stampin' up's textured impressions designer frames.  The sentiment was made using a stamp from Stampin' up's Sincere Salutations set and purple ink.  It was then punched out using their extra large oval punch. 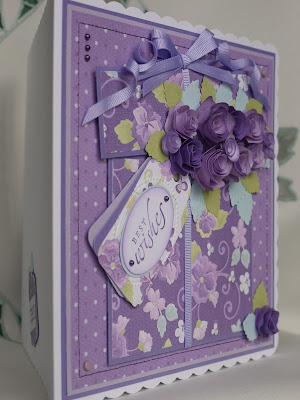 The patterned papers used on Wilma's card are from the Nitwit Collection Time for Tea.  The verse on the insert of the card was created on the computer.  Purple self adhesive pearls, lilac brads along with the usual addition of ribbon and a bow were added as embellishments. 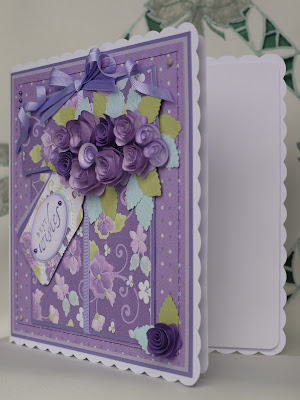 Wilma worked in a florist shop in London who would not only make up personal orders for celebrities but also make up and deliver larger display pieces for shops and hotels.  One day she was given the task of delivering a large display and as she came whizzing out of the shop with it she knocked someone over only to discover it was Ronnie Corbett.

Although she's worrying about it I'm sure she'll make a beautiful job of Amanda's flowers.  I think Carol is getting excited about the big day as she's now counting down how many sleeps are left and posting this on her Facebook page.