Recently Lilian gave me an order to make a retirement card for her friend.  Both Lilian and Helen had worked together in a local school kitchen and Lilian herself had been cook there from when the school opened until her retirement in July this year.  The only guideline given was that Helen liked dolphins.  This I already knew as I'd made a dolphin themed sixtieth birthday card for Lilian to give Helen back in December 2011.

Having just made the lilac stamping squares card I adapted this layout to make the retirement card and used the same Stampin' up stamp from the Baroque Motifs set as the swirls on it reminded me of waves and this was the result.  The patterned papers on this card are from the Cuddly Buddly download A Patchwork of Papers Blue. 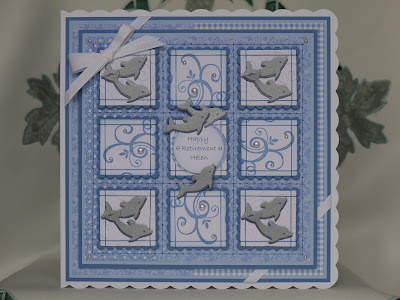 After stamping out the four Baroque motif images using Encore Blue Metallic ink they were die cut using a Spellbinders square die.  Backing layers for them were cut from dark blue card using a Spellbinders scalloped square die and, once layered up, blue thread was wrapped around their corners.  Pearls were added to the ends of the swirls so that it looked like the crests of the waves.

The top layers of the corner squares were cut from white cardstock and embossed using a swirls embossing folder.  They were also layered on to dark blue scalloped squares, had thread wrapped around them and then double layered dolphins cut from two shades of grey cardstock using a Quickutz die were added on top.

The sentiment in the middle was created on the computer and die cut and layered using Spellbinders plain and scalloped circles dies. 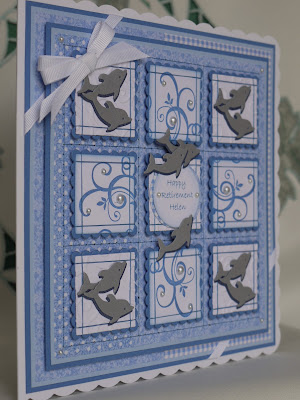 The middle tier was the backing panel for the squares which was blue card and patterned papers layered up with a grid of nine five centimetre squares stitched on to the top layer.  The small square toppers were attached to the centres of the squares using foam pads.  Foam pads were also added to the back of the completed panel before it was attached to the card. 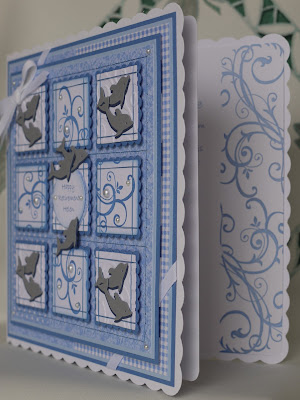 The bottom tier was also made up from layers of blue cardstock and patterned papers and white ribbon was wrapped around two of the corners.  A white bow was added to the top tier.
The verse on the insert was created on the computer and on the right side of the insert a border was masked off and decorated.  Stampin' up's stampamajig was used to help with the positioning of the Baroque Motifs stamp.

I really liked the freshness of the blue and white combination in this card and I hope Helen liked it too.

I'd like to enter this card in the following challenges