In my family, and Alan's family, there are a few Elizabeths and when one of my cousins was a little boy he decided that our auntie and myself should by Auntie Liz and LizLiz.  He was born just nine days before Auntie Liz married and it's hard to believe that he's now been a grandad for four years and that one of his family gets married next weekend.  It must have been an exciting time for my grandparents this time forty-three years ago as during a period of six weeks three grandchildren were born and their youngest daughter got married.  It certainly was an exciting time for me as having been an only child for eleven and a half years I then had a baby sister.

On the 11th of September it was Auntie Liz's birthday and I went back to the box of roses to make her card. 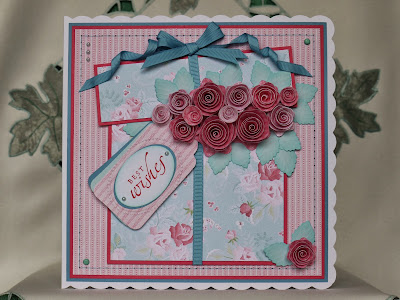 The patterned papers for Auntie Liz's card were from the Nitwit Collection Romance and Roses which were a good match to Stampin' up's melon mambo and marina mist cardstock.  There are some lovely papers and elements in this collection.  The box of roses fits on an 8"x 8" scalloped card and is raised up on foam pads.  The parts of the lid which don't overlap the box are on double layer foam pads.
Rolled roses made using the Marianne die English rose are still my favourite embellishments to use at the moment and these ones were cut from card printed on both sides with two of the papers, one dark and one light patterned, from the Romance and Roses collection. 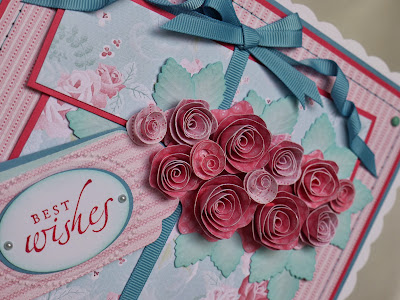 .
The leaves for the roses were punched using an X-cut beech leaf embossing punch and then  had their edges sponged with VersaMagic chalk ink in sea breeze.
An original Sizzix red die was used to cut the gift tags for the box and the top tag was embossed using one of Stampin' up's textured impressions designer frames.  The sentiment set in the middle of the frame was stamped on to white card using a stamp from their Sincere Salutations set and melon mambo ink. It was then punched out using their extra large oval punch and around the edge sea breeze ink was sponged. 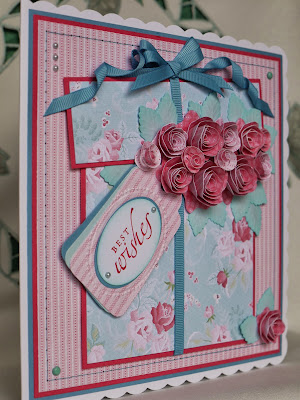 A border was stitched around the card and my usual embellishments of pearls, brads along with Stampin' up's Marina Mist grosgrain ribbon were added. 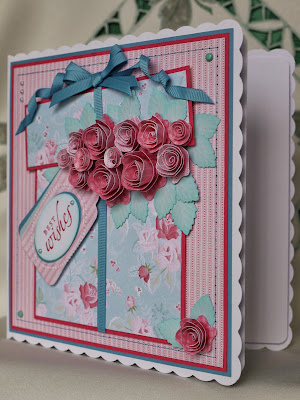 This is the last of the box of roses cards I've made but having bought some more Nitwit Collection digital kits in their recent sale it probably won't be long before I'm trying out the different papers to make up another box.  At our Crafting Bee yesterday Anne was making two boxes of roses cards in pink tones which were lovely.  It's certainly something you seem to get hooked on.

Before signing off I'd like to thank Chris for becoming my latest follower.

Thanks for reading today
Liz xx
Posted by Liz Miller at 01:43