Last month saw the wedding of Daniel and Becky.  As well as being one of Ian's friends who turned twenty-one this year Daniel had an even bigger celebration to look forward to in August when he married Becky and this is the card I made for them.  Daniel and Ian were good friends at Nursery and Playgroup and used to get up to all sorts of capers when they visited each other.  On one of Daniel's visits they were dancing to music from Lord of the Dance doing their Michael Flatley impressions.  Fortunately I was quick thinking enough to catch it on video as it was one of those magical childhood moments you'd never be able to repeat. 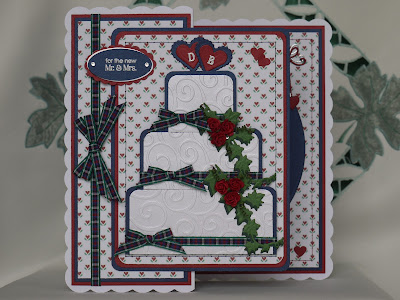 The colour scheme for this one was based around the colours in Daniel's kilt, the bridesmaids' dresses and Becky's bouquet.  Unfortunately I couldn't get Modern Ferguson tartan ribbon to match Daniel's kilt so I used a Mackenzie tartan one instead which was the closest match in colours.  Hopefully there is no historic clan rivalry between the two.  The patterned backing paper is from the Cuddly Buddly download A Patchwork of Papers Red. 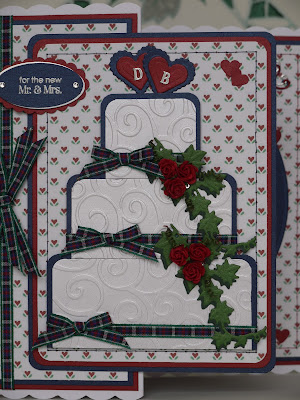 Red and blue cardstock and the patterned paper were layered up to make the backing panel for the cake and a border was stitched around it to make a frame.

The cake tiers of the wedding cake topper were made from rectangles of Crafter's Companion centura pearl card which then had their two top corners rounded before being embossed using a swirls embossing folder. The pieces were backed on to navy card to leave a quarter centimeter border around the sides and top.  Tartan ribbon was wrapped around each piece before they were attached to each other.

Foam pads were used to attach the cake to the backing panel and ribbon bows were added to each tier.  The hearts at the top of the cake were cut using Spellbinders plain and scalloped hearts dies and the couple's initials were added inside the hearts using peel offs.  The double layered trailing ivy was cut using a die from the Marianne Creatables Ivy die set LR0206 and attached to the ivy are 10mm paper roses from Wild Orchid Crafts.
A stamp from the Stampin' up set Petite Pairs was used to make the sentiment.  It was stamped with VersaMark ink and embossed using Stampendous detail silver embossing powder and then punched out and layered using Stampin' up's plain and scalloped oval punches.  Small red hearts punched out using a Woodware punch were added to the corner of the topper. 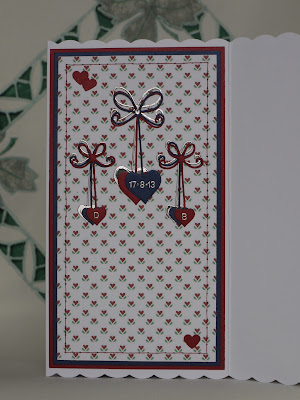 Die cuts made using the Precious Hearts dies from Memory Box were used to decorate the panel behind the front of the card.  The couple's initials and marriage date were added to the hearts. 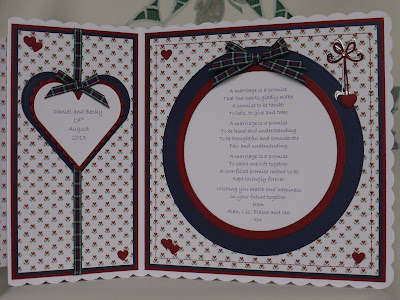 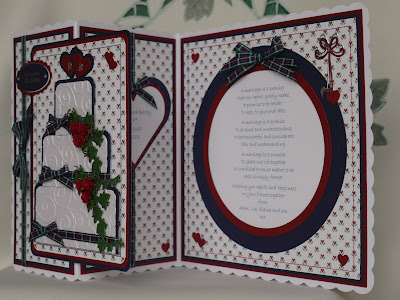 Click on this link to visit Sarah Jane Ethan's photography site to see photos of the couple's big day.  My best wishes to them both.
Thanks for reading today
Liz xx