Elements from the wedding stationary were used on the card I made to give Elaine on her wedding day. The backing paper from the Nitwit Collection Petalfresh along with cream and dark and pale green pearlescent card were used to make up the layers and lots of paper flowers were added as embellishments. 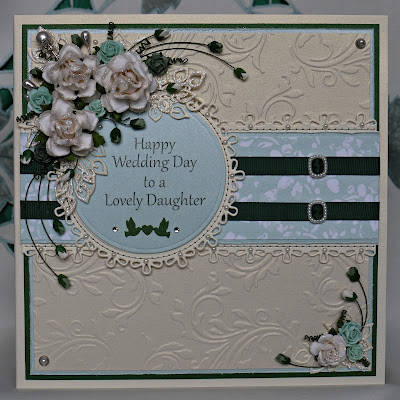 Three layers of card made up the base for the front of the card. The edges of the middle layer were distressed and the top layer of card was embossed using the Crafters Companion Regency Embossalicious folder. Attached across this base were layered up strips of card with green ribbon and ribbon sliders wrapped around them. The edges of the bottom strip were die cut using a Marianne stitching border die and the edges of the middle layer were distressed.
Added on top of the layered strips was the sentiment which had been printed from the computer, die cut using a Spellbinders circle die and backed on to a layer of cream card die cut using a Marianne stitching die. This stitching die matched the border die which had already been used and dark green thread was used for the stitching on both these pieces. 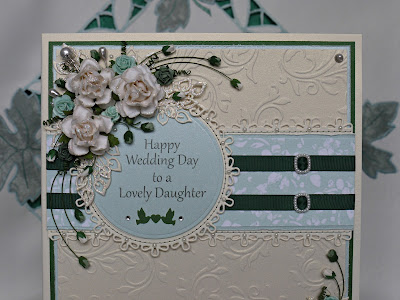 Lots of paper flowers in shades of cream and green were arranged around two of the corners of the card. Dazzling diamonds glitter from Stampin' up was added to the cream ones and also to some of the cream leaves which had been cut using a Marianne die. I didn't have dark green rosebuds to use so a green Promarker pen was used to colour cream ones. When holding the chisel end of the pen against the mulberry buds they soaked up the ink from the pens perfectly.

Before gluing the flowers to the card a pearl crown and two teardrop stick pins were attached underneath with their sharp ends embedded in foam pads. Once the pins and die cut leaves were in place the flowers were arranged and glued on top.  The stems of the roses were coiled around a knitting needle. 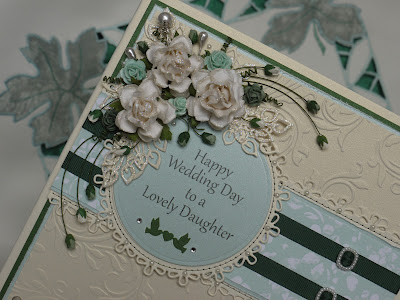 Other embellishments added were the love bird punch outs, diamantes, pearl brads to two corners of the card and lots of self adhesive pearls around edges of layers and amongst the flowers. 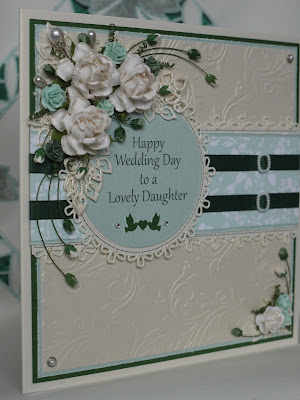 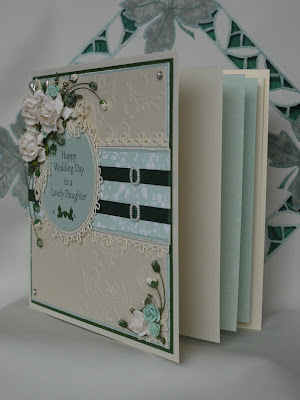 A double layer insert of cream pearlescent paper and pale green parchement paper were added to the inside of the card.  This verse was printed on the inner layer.

Today dear daughter, as you walk down the aisle
You will see all the faces wearing a smile,
But as we remember those young tender years
Our smiles will conceal a few hidden tears.
It is not through sadness, just emotions awhirl
As we both think back to a dear little girl,
And now you have grown and made us so proud
As you smile for the camera and the rest of the crowd.
Remember Elaine, as you become Andrew's wife,
You are still very much a part of our life,
We're not losing a daughter, but gaining a son,
Your new life as husband and wife has begun.

To protect the card I made a box and decorated it to match the card front.  A friend of Elaine's came along to photograph moments of us getting ready on the wedding day and she used this box as a prop to photograph Elaine's engagement ring. 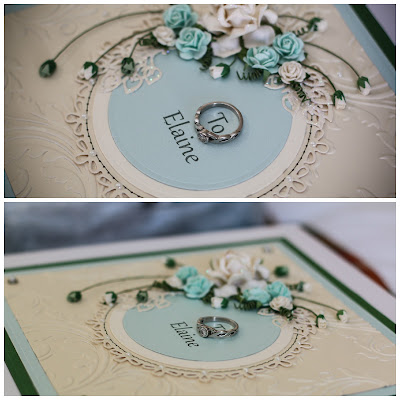