Wedding Card for the Newlyweds

As well as making individual wedding cards for Elaine and Andy I also made a card for them as a couple. Shades of green pearlescent card and the Nitwit Collection patterned paper used in printing the wedding invitations were also used to make this card. Panels, made from layering up the coloured and patterned card, were attached to faces of the z-fold card and a stitched border was added to each of the top layers to add an extra frame. 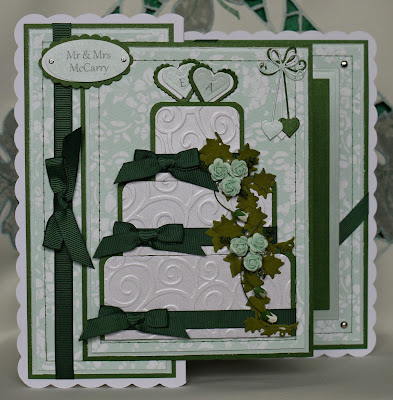 The tiers of the wedding cake topper were made from rectangles of white Crafter's Companion centura pearl card which had their top corners rounded before being embossed using a swirls embossing folder. The pieces were backed on to the dark green card to leave a quarter centimeter border around the sides and top.  Green ribbon was wrapped around each piece before they were attached to each other.
Foam pads were used to attach the cake to the backing panel and ribbon bows were added to each tier.  The double layered trailing ivy was cut using a die from the Marianne Creatables Ivy die set LR0206 and attached to the ivy are green paper roses and cream and green rose buds. Self adhesive pearls were added amongst the roses.

Elaine and Andy's initials were printed from the computer and die cut and layered using Spellbinders plain and scalloped hearts dies.  This made up the cake topper. When using both Elaine and Andy's initials together on wedding items we always made sure to put Elaine's initial first so as to avoid any A & E jokes. The sentiment was also printed from the computer and punched out using Stampin' up oval punches.  Hanging hearts were die cut using a Memory Box die, layered up and attached to the corner of the base panel. 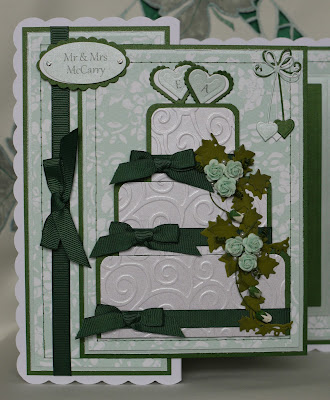 Attached to the inside of the card was a printed verse which was framed and die cut using Spellbinder square dies. On the opposite flap the couple's names and date of marriage were printed on to card and die cut and layered using Spellbinder heart dies. Smaller die cut hearts, silver peel off hearts and silver brads and green ribbon were added as embellishments. 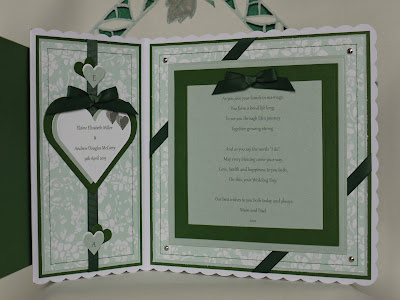 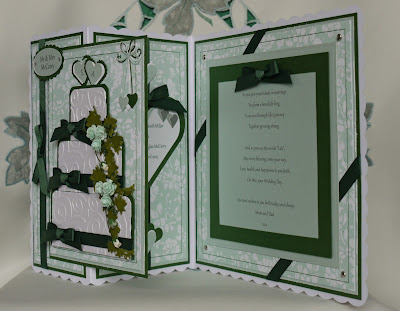 A verse about marriage was printed on to the top layer behind the Z-fold with silver peel off wedding rings added as an embellishment. 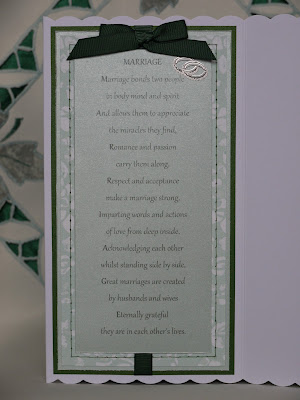 The box for the card was decorated with layered up hearts as in the inside of the card. 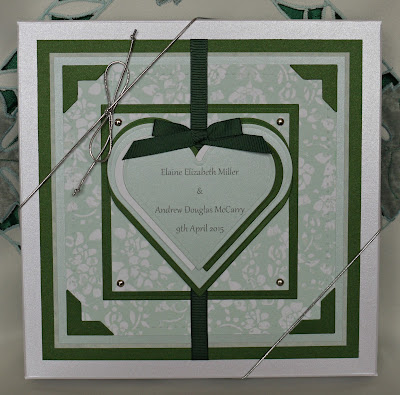