There were usually a few pieces of Elaine and Andy's wedding stationary being made at the same time which helped with the monotony of batch making. Having watched two craft friends make wedding stationary I knew that there would be a lot of repetition work involved. Chopping and changing between pieces also meant that when a decision had to be made about one of them, such as wording, then the production line could keep moving forward with something else until that decision was made. 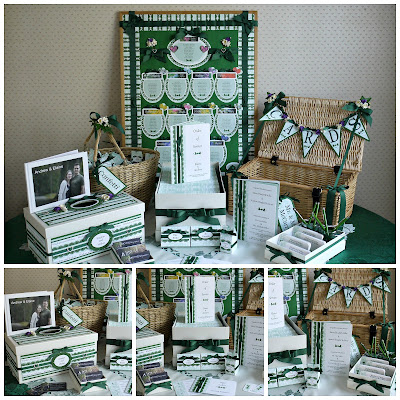 The Order of Service cards matched the invitations and they too had the dark green lining paper and the wording printed on pale green parchment paper.  Once finished they were stored, ready to take to the church, in a large cream gift box which was decorated with dark green grosgrain ribbon. Our local card shop had a range of different sizes of these cream boxes so a few were bought and decorated for various purposes on the day. 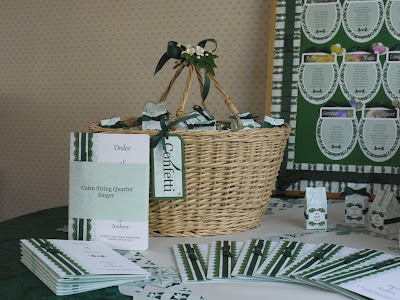 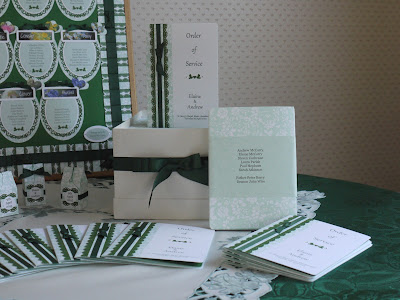 Two boxes were used for the wisdom and wishes cards. The smaller box held the cards and pens for guests to write their good wishes and advice on and the larger box was the posting box for the cards.  Along with their wedding day cards they took these wisdom and wishes cards away to read on their honeymoon and Elaine intends to scrapbook them all later. The larger box is now being used as a keepsake box so the posting hole has been sealed up with layers of acetate attached above and below the hole cut in the lid and silver heart confetti is trapped  between the two layers of acetate to make a shaker window. 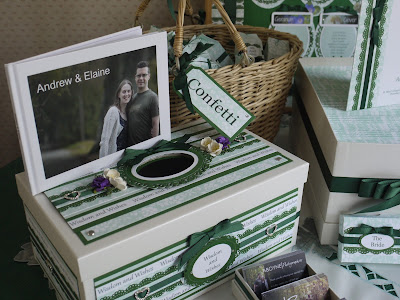 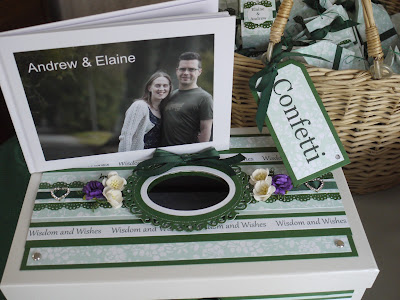 Another box was used to store photographer information cards for guests to take away with them. These cards were put together by Elaine and Andy using photos from their engagement shoot and printed on each one was the password guests would later need to view their wedding photos. Blank DVDs were also made available for guests to take home with them so that they could send Elaine and Andy photos they had taken of the day. Sometimes guests can catch magical moments which go unnoticed by the bridal party. Card envelopes for the DVDs were printed and addressed to match the stationary. 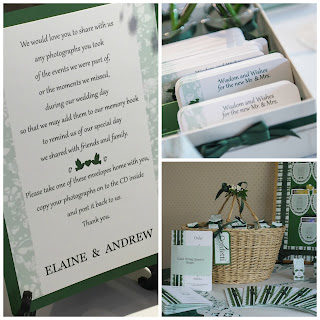 Andy had also put together a photo book for guests to look at which included lots of photos of themselves, and of their friends and family, which recorded special events and holidays since they had become a couple.  Photography is important to Elaine and Andy as it was at a local photography class that they had first met.  To celebrate this they each had a photo board with a selection of their favourite photographs on display for guests to view. 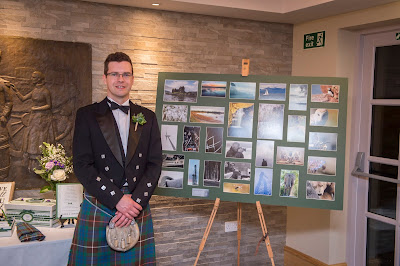 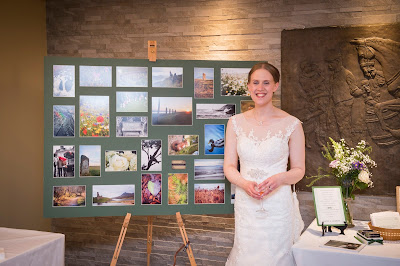